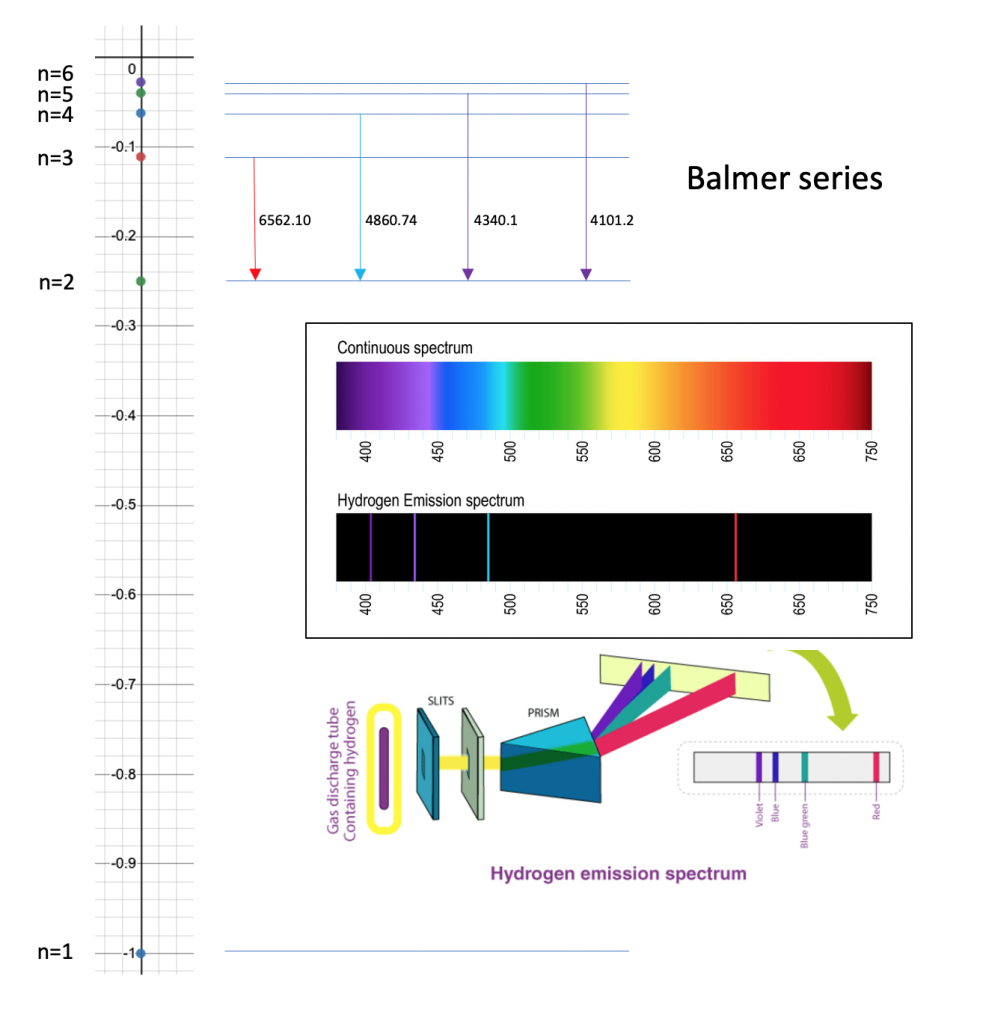 2. Balmer (in 1885) figured out a formula that predicted the wavelengths of the first 4 lines of the visible spectrum for hydrogen.  His formula for these first 4 lines was: lambda = 3645.6 * m^2 / (m^2 – 2^2) where lambda is the wavelength in units of 10^-10 meters (now known as Angstroms), and m was an integer series starting with m=3 – he used this same formula to match the wavelengths of 10 additional ultraviolet lines in the series, extending the series up to m=16.  The ultraviolet lines came from observations of the spectra of stars.  This series of wavelengths is now known as the Balmer series.

3. Rydberg (in 1890) expanded on Balmer’s formula for use with other atoms (especially alkali atoms) – Rydberg’s version of the formula is inverted and expressed as a measure of reciprocal wavelength: (1/lambda) = 109721.6 * (1 / n^2 – 1/m^2). This is the form that is used today.  The current value of the constant in this formula (now known as the Rydberg constant) is 109737.316 in units of cm^-1 (also known as reciprocal centimeters or wavenumber).  Balmer and Rydberg’s work inspired Nils Bohr to develop a theory that would explain these formulas.

4. Planck (in 1900) introduced a theory to explain the continuous spectral emissions of a hot body (blackbody spectrum).  Planck’s theory introduced the concept of quantum states of energy  E = h * nu, where E is energy, nu is frequency, and the constant h.  h is now known as Planck’s constant.

5. Bohr (in 1913) introduced a theory of the atom now known as the “old quantum theory” that combined classical ideas with the then new quantum ideas of Planck.  Bohr postulated that an atom was akin to a planetary system with electrons orbiting in circular orbits.  Bohr’s model introduced the concept of stationary states and a lowest state with quantum number n=1.  Higher energy states (circular electron orbits) had increasing quantum numbers n=2,3,4, …. Bohr’s work followed the work of Rutherford (in 1911) who postulated that an atom was made of a positive charge center surrounded by electrons.  Bohr was able to derive the Rydberg formula,  as well as an expression for the Rydberg constant based on fundamental constants of the mass of the electron, charge of the electron, Planck’s constant, and the permittivity of free space.

6. Sommerfeld (in 1916) expanded on Bohr’s ideas by introducing elliptical orbits into Bohr’s model.  Sommerfeld’s improvement allowed the Bohr model to explain the splitting of the Balmer lines when the hydrogen atom was in an electric field.  Electric field splitting of lines is known as the Stark effect.  Today the “old quantum theory” is known as the Bohr-Sommerfeld Model.

7. de Broglie (in 1924) in his PhD thesis developed the idea of matter waves that have a wavelength given by lambda = h / p, where h is Planck’s constant and p is the particle momentum.

8. Schrodinger (in 1926) developed a theory that launched the field of Quantum Mechanics, known as Schrodinger’s equation.  It is a non-relativistic theory that is used today to describe atomic structure.

A detailed timeline with links to the original papers follows ….

1814 – Fraunhofer observes dark lines in solar spectrum – gives major lines a letter based designation – the C line is H-alpha, the F line is H-beta, the G’ line is H-gamma, and the h line is H-delta.  D1/D2 are the doublet lines of Sodium. 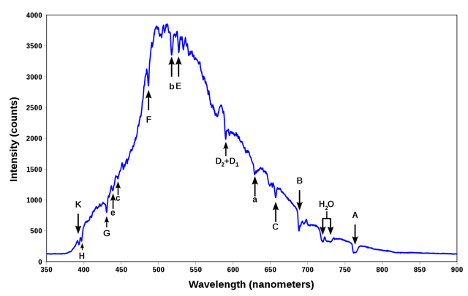 1897 – Larmor theory of magnetic field effect on spectra, and Radiation from moving charges

Larmour 1897 On the theory of the magnetic influence on spectra; and on the radiation from moving ions _ Zenodo 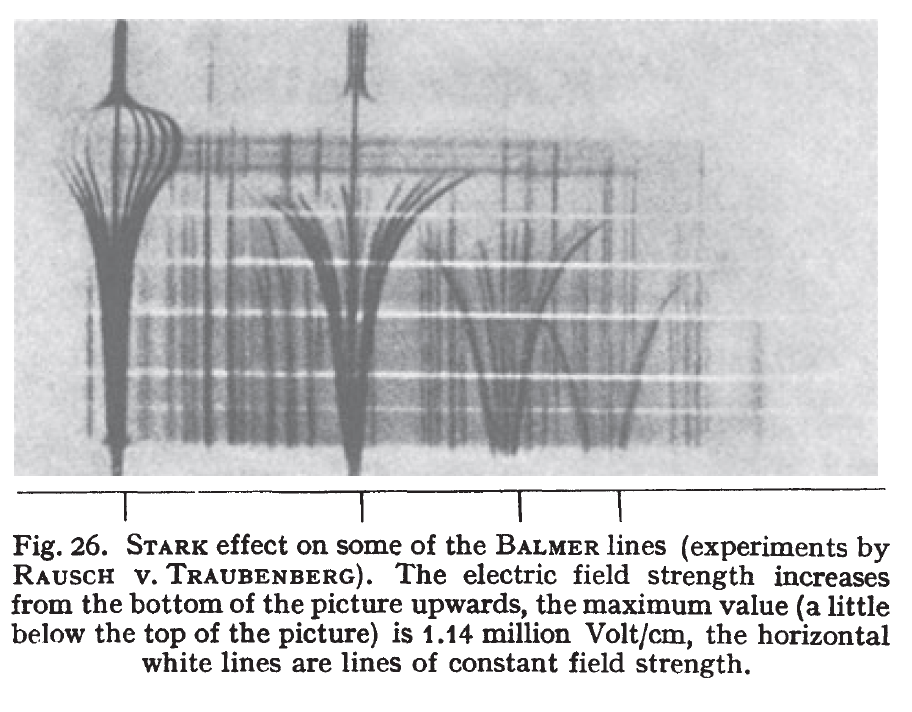 1925 – Goudsmit and Uhlenbeck – introduce the concept of electron spin – electrons are magnetic! 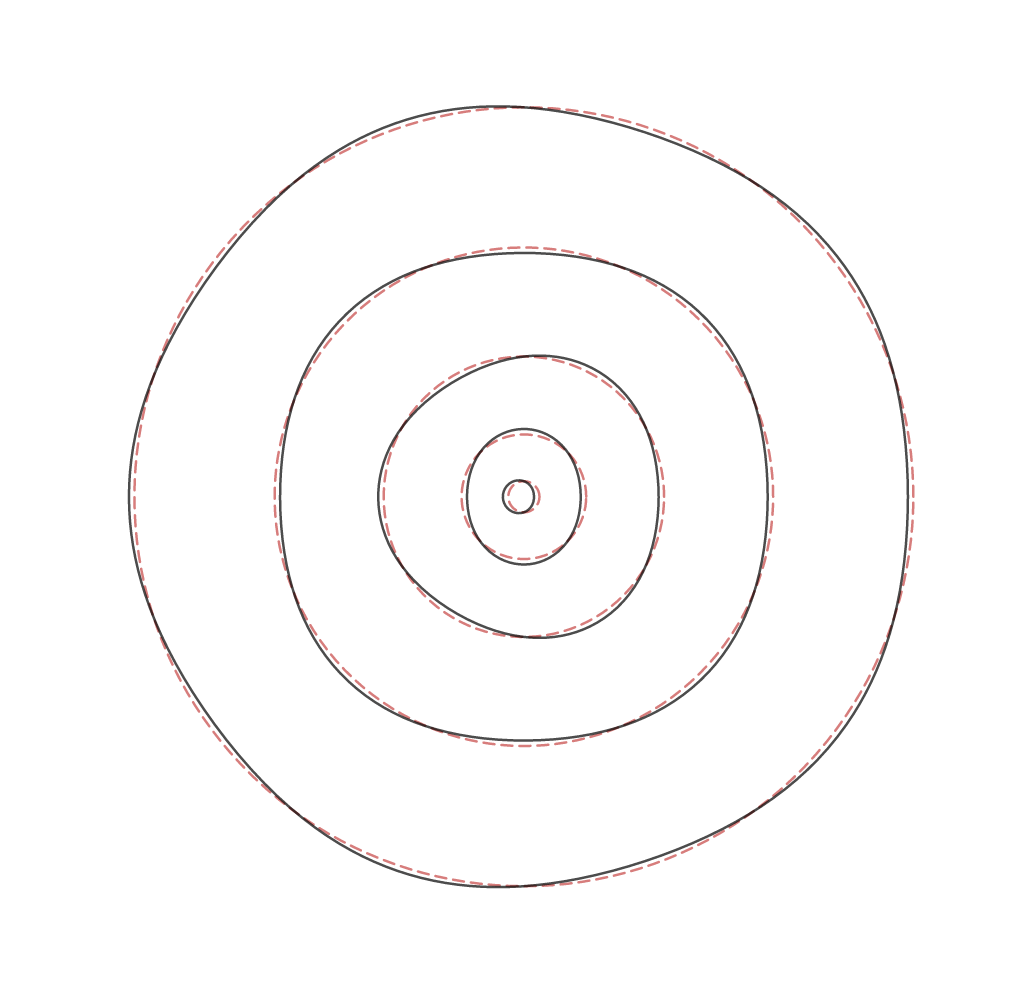 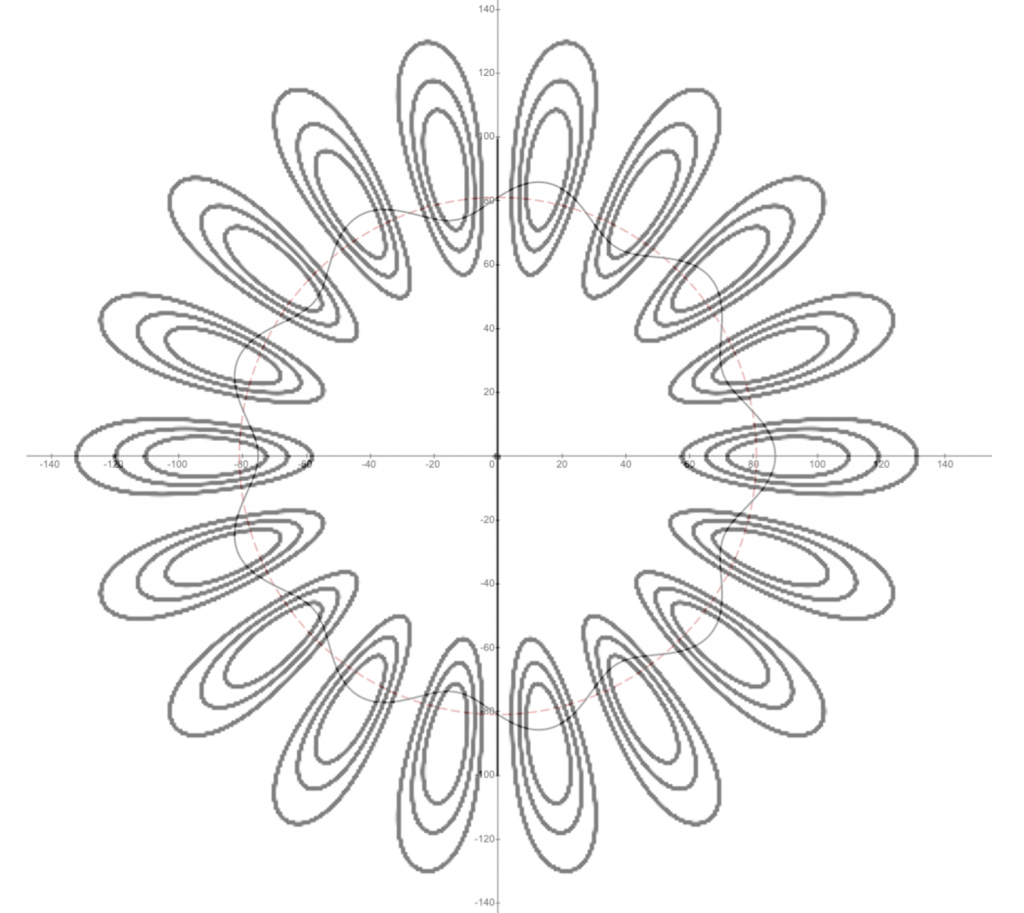