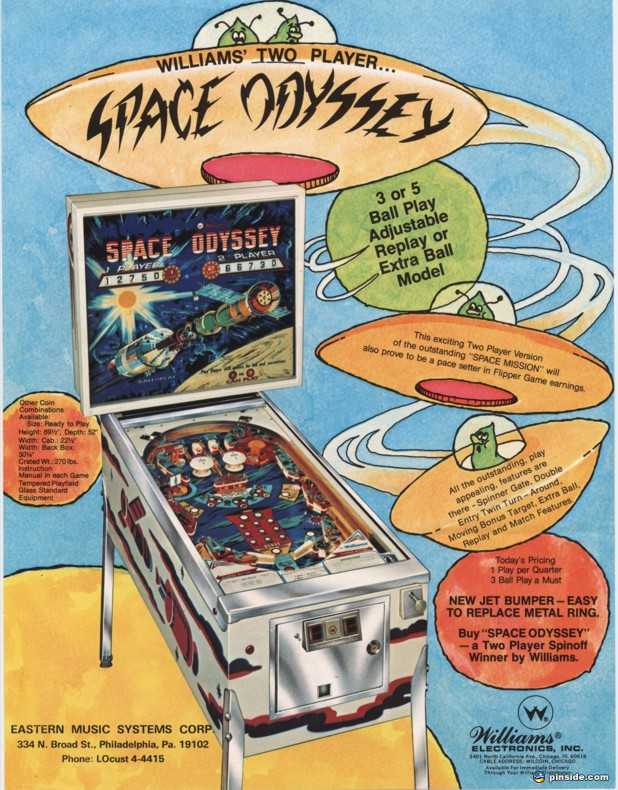 Space Odyssey is a space flight themed pinball machine that is the two-player version of Space Mission. Up to two players can play, alternating turns between balls. Settings are available for 3 or 5-ball play as well as extra ball or credit and numerous scoring options to set the game’s difficulty (and earnings).

The artwork on the backglass is based on a painting by Robert McCall. The original painting is shown below (picture courtesy of nasa.gov). 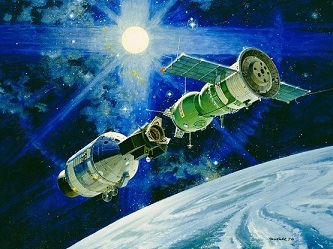 Now, here is the back glass art on Space Odyssey that was inspired by the above painting: 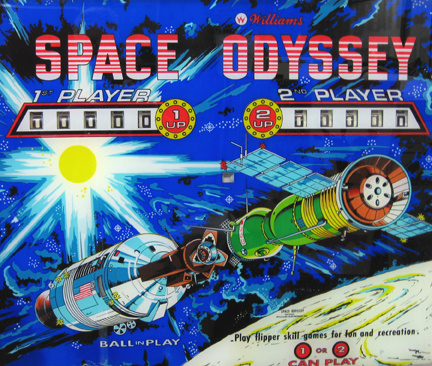 Rules
The Space Odyssey we restored is set to play as follows:

If one or more letters are lit, the kickouts near the flippers will increase in value as indicated and shooting the ball into either of the two circular eject holes will light double bonus (as indicated by the light near each hole).When double bonus has been earned, a light below the bonus counter in the center of the lower playfield will illuminate, indicating that the bonus at the end of ball will be doubled. The bonus can be advanced by hitting either yellow stand-up target labelled “Advance Bonus” near the pop-bumpers, by rolling over the “Advance Bonus” rollover switch behind the spinner or by passing through the “Super Bonus Advance” horseshoe, worth 3 bonus advances.

If all three letters (A, B, C) are lit, one of the outlanes will light a red light for special. If the ball goes down the outlane lit for a special, a credit (free game) will be awarded. A knocking sound will indicate this. Free games can also be earned by reaching 168,000 points and 197,000 points (and any multiple of 100,000 beyond those values). Which outlane is lit for special will alternate frequently. This alternation occurs at the end of each target that scores 50, 500 or 5,000 points. This alternation also controls whether or not the left and right rollovers at the very top of the playfield are lit to score the swinging target value (as if the swinging target were hit). It is thus in your advantage to plunge the ball so that those lights turn on (or remain lit) and then get the ball to roll down either the left or right lane.

If the illuminated light in front of the swinging target is one of the two orange lights, the spinner will be lit for 1,000 points per spin instead of the usual 100 and the extra ball rollover lane will light in the middle of the upper playfield. If the ball rolls down that lane, an extra ball will be awarded as indicated by the “Same player shoots again” light on the back glass and lower playfield. Only one extra ball can be earned at a time and cannot be earned from a plunge (the extra ball opportunity ends when the ball drains).

Additionally, at the end of a ball, the bonus is awarded (with a max bonus of 20,000 or double bonus of 40,000) assuming the player has not gotten a tilt. The penalty for a tilt on Space Odyssey is that the ball in play ends and no bonus or extra ball is awarded. After 3 balls have been played, the “Game Over” light on the backglass will illuminate as well as a pseudo-random two digit number. If these two digits happen to match the last two digits of your score, a credit (free game) will be awarded as indicated by a knocking sound. Your score will remain on the back glass until a new game is started; if your score is over 100,000, a light to the right of the score reels indicating that will illuminate. 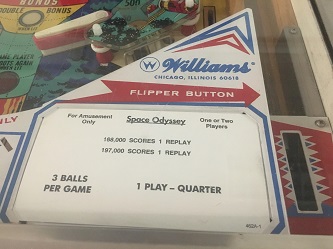 Note: Sources for all information and images are listed under the “Websites” link.