Joseph Henry came to Princeton in 1832 and was given the use of a house. That house, previously occupied by Prof. Vethake was replaced in 1838 with the Joseph Henry House. The Joseph Henry House has been relocated 3 times since. The House was registered as national historical landmark in 1965. Though well documented, there are questions about the origins of House. One of the questions we address is whether Henry really design the house, or whether it was designed by the local builder, Charles Steadman.

“Resolved, that a house for Professor Henry be forthwith erected, that it be of stone, on the site shown by the plan of the grounds adopted by the board; and that a sum not exceeding four thousand dollars (with the materials now in the house occupied by Professor Henry) be appropriated for that object.”

Legend has it that Henry was lured to the College by the offer of both a professorship and the promise to build a house according to Henry’s specifications and design. The structure itself was built of brick painted red and had wooden porches. 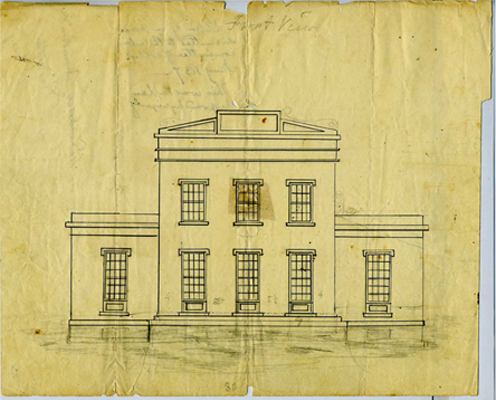 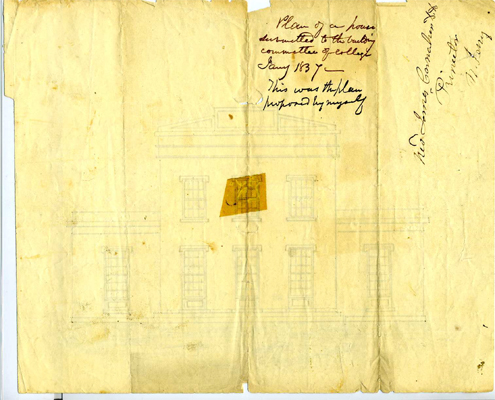 “Plan of our house submitted to the building committee of college – January 1837. This was the plan proposed by myself.”

The drawings above were kindly sent by Smithsonian Institution Archives (please see full bibliography below). Although said to be in Box 50 (“The Papers of Joseph Henry“), this drawing was found in Box 49 with a record unit of 7001. We would express our gratitude towards Mary Markey and Kathy Dorman from Smithsonian Institution Archives who have helped us in locating this article.

“We are just about to move and hope to get into the new house in the course of the present week … We commenced to move to day and expect to get through by tomorrow night.”

The lithograph from 1860 shows the house similar to what we have today.

The picture from 1863 shows the house similar to what we have today.

The lithograph from 1875 shows the house similar to what we have today. Note that the relocation has been completed by 1870 and thus the house stood on different ground.

Interestingly, the lithograph of the house in 1837 shows similar structure to the proposal Henry made (see above). J. H. Bufford seemed to compile all the plans and building (including West College, Whig and Clio) in one picture. It should be noted that Whig and Clio should not appear in the lithograph since Nassau Hall would have blocked the view from this vantage point. 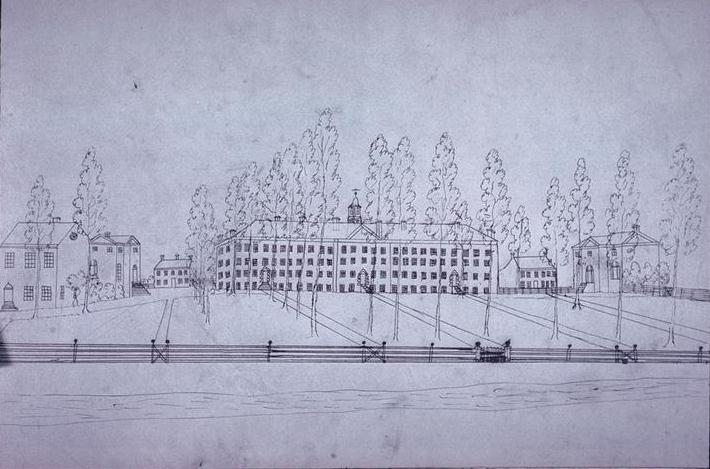 The house that Joseph Henry and his family lived in from 1832 until 1837 was closer to Nassau Hall than the 1838 house, Its entrance also faced Nassau Street and was at the end of a long path. The drawings below show the house. Note that neither East or West College appear since these were not yet built. at the time of this drawing – circa 1825. East college was built in 1833 and West in 1836. Henry’s original house is to the right of Nassau Hall – the house to the left is the Steward’s House. In the front left of the front campus is the Vice President’s house which was occupied by John Maclean Jr. at the time that Joseph Henry was hired. The Vice President’s house was quite similar to the Joseph Henry’s original house in design. The building to the left of Nassau Hall is Philosophical Hall where Henry had his laboratory on the upper floors. At the time of this drawing the bottom floor was used as a dining hall – the building was know as the refectory. The twin structure to the right of Nassau Hall is the library that is now Stanhope. Philosophical Hall, the Vice President’s house, the Steward’s house, and the orginal Henry house have all been demolished.

This drawing is like the previous one but seems to be more accurate in the appearance of the buildings. We gather this by comparing the quality of Nassau Hall and Stanhope. Again East and West College are not present, so this drawing must be sometime before 1833.

This lithograph shows the front campus as in the two earlier drawings, but this time East College appears in the background. West College has not yet been built – that occurs in 1836. Henry’s house is demolished in 1837, and his new house is built in 1838. Whig also is constructed in 1837-38.

The Vice President’s House was torn down in 1870. The portico was added in 1832. The building was constructed in 1799 in a federal style and known as the professor’s house – the first of several. This was the third building added to the campus – Nassau Hall was the first, and the Presdient’s House was the second. Note that this house is very similar in appearance to the Joseph Henry House of 1838. 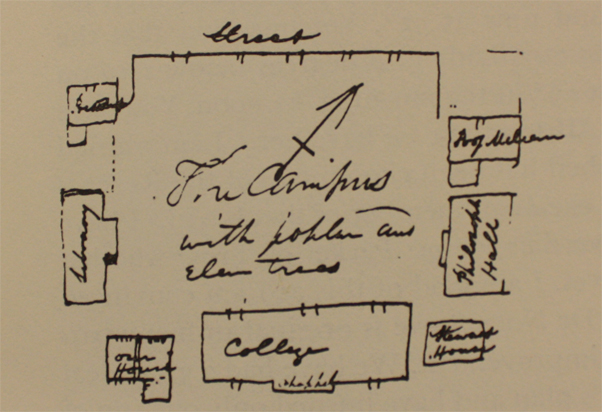 Joseph Henry sketched a plan view of the front campus and showed where his house is (written: “Our House” as he was writing to his brother, James). This house was the first one that Henry and his family occupied until 1838 when the Joseph Henry House was constructed..

“I do not recollect of having given you a sketch of our situation. From the annexed diagram you will be able to come to our door when you visit Princeton without inquiring.”