Following Ampere’s proposal, Professor Schweigger of Halle, Germany created the first true galvanometer. Oersted had observed that a current passing above the needle deflected it in one direction, and that a current passing below in the opposite direction would deflect it in the same direction. Schweigger utilized these observations by winding a wire in a loop around the needle, thus producing a greater deflection. He then wound additional loops which further amplified the effect, for the current in passing with each turn would deflect the needle further every time. He dubbed this his “Verdopplung Apparat” (doubling apparatus) or “Multiplicator” (multiplier). Consisting of this coil of wire and a magnetic needle, the galvanometer was now capable of detecting incredibly small currents (Electricity and the Electric Telegraph, by George Prescott, p92-4) . Following Schweigger’s design, Professor Joseph Henry constructed his own galvanometers (The Rise of the Electrical Industry During the Nineteenth Century, by Malcolm MacLaren, p133-4). These would come to be instrumental in his experiments in electro-magnetism.

Schweigger’s paper can be found at the Jahrbuch der Chemie und Physik on pages 1-17.

Below is an excerpt from a student notebook where Professor Henry describes Schweigger’s coil.

“We have noticed the fact that magnetism is much more powerful when acting through a coil of wire. Prof. Schweigger of Halle has taken advantage of this and invented an instrument called the galvanometer by which the smallest current of galvanism is readily detected.” -Daniel Ayres Jr.’s Student Notebook, lecture notes from Joseph Henry’s Natural Philosophy class, 1841 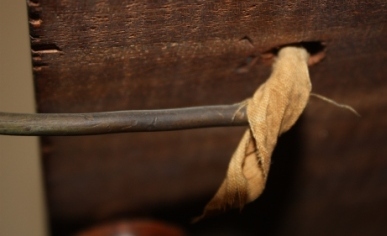 This is a segment of wire that protrudes from the bottom of the base of Henry’s galvanometer. You can see that there is wrapping that is coming off of the wire. This wrapping was proposed by Schweigger when he invented his multiplier coil. Its purpose is to insulate the wire to prevent the turns from contacting and short circuiting. Thus, the wire could be wound tightly, with its turns bundled together, to form a coil. 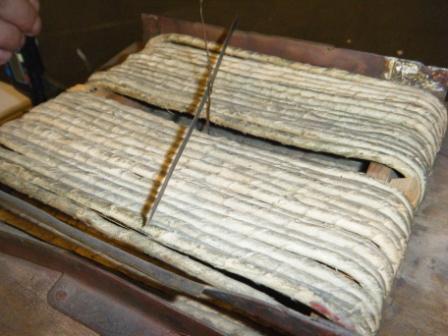 This is a picture of the coil in Henry’s galvanometer. You can see his use of the wrapping and how tightly the wire is wound together. Each turn in this coil amplifies the effect of the current, further deflecting the needle.