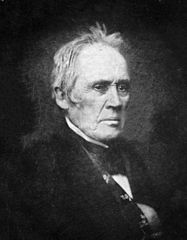 By offer, Joseph Henry constructed yet another powerful electromagnet. This time for Professor Benjamin Silliman, a Chemist and friend at Yale University. This electromagnet, more powerful than anything Henry had ever built before, was to be sent to Professor Silliman’s lecture hall at Yale for demonstrations in early January 1831 before his students departed for medical school.

The electromagnet was constructed of a 30 inch long bar of soft iron bent into the shape of a horseshoe. 800 feet of copper bell wire, separated into 26 coils (quantity magnet), was coiled around the soft iron horseshoe . The ends of the 26 pieces where soldered in parallel to the galvanic battery (1). It was eventually completed and installed in April of 1831. The magnet weighed 82.5 pounds and had a lift rating of over 2,000 pounds(1 ton), over 20 times its own weight.

AJS – An account of a large Electro-Magnet, made for the Laboratory of Yale College