“The galvanometers mentioned in this paper, and referred to in the last, are of two kinds; one, which is used with a helix, to indicate the action of an induced current of intensity, consists of about five hundred turns of fine copper wire, covered with cotton thread, and more effectually insulated by steeping the instrument in melted cement, which was drawn into the spaces between the spires by capillary attraction. The other galvanometer is formed of about forty turns of a shorter and thicker wire, and is always used to indicate an induced current, of considerable quantity, but of feeble intensity. The needle of both these instruments is suspended by a single fibre of raw silk.” (Contributions to Electricity and Magnetism, No. IV, On Electro-Dynamic Induction, from the Transactions American Philosophical Society, vol. VIII, pages 1-35, read June 19, 1840, qtd. in Scientific Writings of Joseph Henry, Vol. 1, p150)

When Henry uses the terms “quantity” and “intensity”, he is referring to current and voltage, respectively. The intensity galvanometer consisted of many turns of fine wire. The length and the small cross-section of the wire meant that it had very high resistance, and thus, a current with a high voltage (or intensity) would have to be applied to the galvanometer in order to overcome this resistance. However, this galvanometer would compensate for the restricted flow of current by the number of turns multiplying that smaller current. On the other hand, his quantity galvanometer had a few turns of thick wire, which meant low resistance. That meant that very little voltage was needed to overcome its resistance. However, the current would be multiplied by only a few number of turns; therefore the amount of current flowing through each turn would have to be greater in order to produce the same deflection. This is an application of Ohm’s Law (Note B from “A Memoir of Joseph Henry: A sketch of his scientific work” by William Bower Taylor). 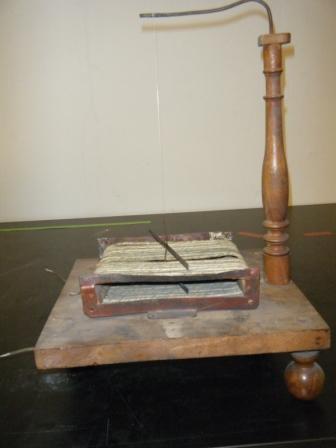 The diameter of the wire in the quantity galvanometer is 4 mm. It has 30 turns, and the measured resistance is .04 Ohms. 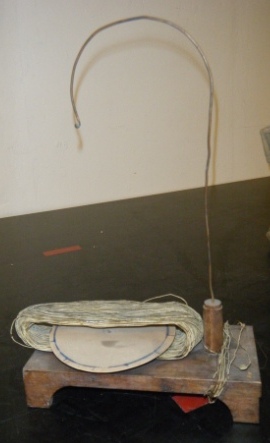