In 1827, the oscillatory discharge of a Leyden jar connected to an inductor was noticed by Felix Savary. Later through some similar experiments based on oscillatory discharge, Joseph Henry discovered electromagnetic wave by magnetized a needle with current across a distance. In both experiments, because of lacking of advanced measurement tools such as oscilloscope, steel needles were used to detect EM wave. The magnetic strength and polarity of the needles after being magnetized by the EM wave were measured for quantitative study. It should be noticed that in early 19 century, no magnetic field sensors were available; therefore the scientists developed several simple but clever methods to measure the magnetic field strength of needles.

The results showed that both Henry’s and Savary’s methods could give an accurate measurement of magnetic field strength. By understanding these simple but effective methods, we can learn to appreciate the creativity of scientists, who made significant discoveries even without any help of modern equipment.

The sensor and needle to be measured are fixed at the same position in every measurement and the data from sensor is captured by DataStudio.

In Henry’s experiments, a magnetometer was used, which is replaced by a compass here. Following is a description of magnetometer by Henry.

A compass is used to simulate Henry’s original method. Detailed description of the method can be found here.

Savary’s method was the same as Biot-Savart’s method according to the following notes: 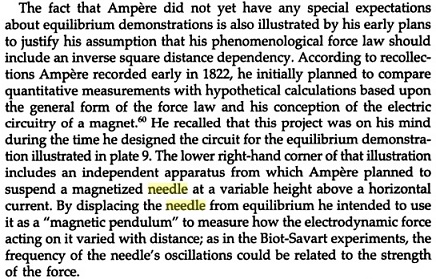 A brief introduction of Biot-Savart’s experiment is given in André-Marie Ampère: Enlightenment and Electrodynamics, Page 232: 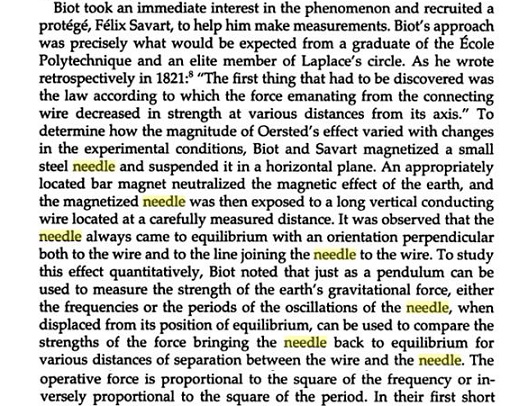 To simulate Savary’s original method, the wire in original experiment is replaced by a bar magnet to produce stronger magnetic field. Detailed description of the method can be found here .