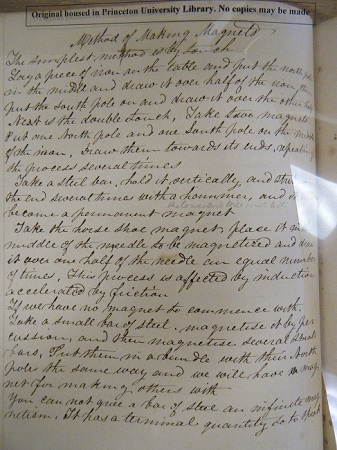 Take a steel bar, hold it vertically, and strike the end several times with a hammer, and it will become a permanent magnet.

Take the horse shoe magnet, place it in the middle of the needle to be magnetized and draw it over one half of the needle an equal number of times. This process is affected by induction accelerated by friction.

If we have no magnets to commence with. Take a small bar of steel magnetize it by percussion, and then magnetize several small bars. Put them in a bundle with their North poles the same way and we will have a magnet for making others with.” 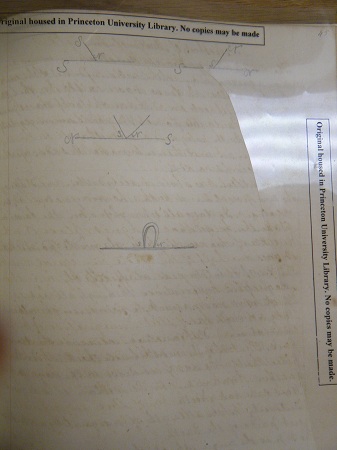 “Steel is rendered magnetic in different ways & once magnetized retains its power for a long time. A piece of soft iron held perpendicularly & struck slight-ly becomes magnetic and may be used for magnetizing the steel. The power resides in the iron and is only developed by the presence of the magnet, as shown by the magnet’s losing none of its power. It is necessary to have some force to begin with, and it may be derived from the earth as above mentioned – or by twisting wire -or by hammering punching &c. We magnetize, first by the simple touch (?)e by rubbing a piece of iron from the middle to one end, with the north end, of the magnet, and from the middle to the other end, with the south end. &c The double touch is by taking two magnets, joining them by their opposite poles, making an obtuse angle, bringing these ends on to the middle of the bar, and drawing each to the end &c. The touch in a circuit is by forming a circuit with the bars, and moving the horseshoe magnet backwards and forwards upon it. Between the two poles a strong current is excited, & on moving the magnet around we magnetize the bars to saturation i.e. to as a high degree as the bar is capable of retaining. &c Amazing experiments may be performed with a duck containing a magnet upon the water &c.”

“Method of Making Magnets: We can render a steel bar magnetic by placing a magnet on its middle and drawing it off towards one end than reversing the magnet and drawing it off to the other end. Magnetism is thus induced which will will remain [in ?] for an indefinite time. Left it gradually returns to its natural state in manner similar to an [??] [??] body. This method is that of the single touch. The double touch is [when] we place the N + S poles of two magnets on the middle of a bar and draw them off towards each end. When a bar has as much magnetism as it can hold it is said to be saturated. There is another method like the last but more simple and better. The bar is placed on two magnets as [?? ?? ??]. Thus two other magnets are used in the manner discribed above. Each end of the steel bar is between 2 magnets. Another was is to arrange the bars to be magnetized in the form of a parallelogram. A horseshoe magnet is then drawn over them in one way. We may want to magnetize a bar when we have no magnet. Take a number of equal bars say six. Strike them on the ends with a hammer. Next arrange 4 of them in the form of a parallelogram, and use the other two as a horseshoe in the manner last described. Afterwards select two others from this parallelogram and use them as a shoe, their place will be supplied from the bars of the ex-horseshoe. This being continued all around, a strong magnetism will be induced.”

“Prof. Henry’s next conclusion was that a flash of electricity from the clouds should produce the same inductive current; his next experiment was to see whether the conclusion agreed with the fact. Fastening a wire to the tin roof of his house, he passed it via the interior of his study down into a well; making a break in it where it entered the study, and found that a flash of lightening discharged anywhere within 20 miles of Princeton, magnetized needles placed at this break. These secondary currents again induce others in the bodies beyond them, Professor Henry by means of the needles magnetized succeeded in proving the existence of [? all, 4?] such successive currents. The manner in which the needles were magnetized also enabled him to ascertain the directions of these currents, which were opposite (fig 6.) to that of the current inducing them.”

“The magnetic property may be developed in steel by rubbing the latter with a load-store. Developed we say, not imparted, for the load-stone loses none of its own magnetism in the process, and we must conclude that the magnetism which the steel now exhibits previously existed in it. The phenomenom is precisely analogous to that of electrical induction. These are several methods of ‘Communicating’ or developing magnetism. Take a steel needle, and rub slightly one end with the north end of the magnetic load-stone or bar, and the other end with the south end of the bar. Placing the needle now on a cork floating in water, it will now point north and south.”

“ A Method of Making Magnets. As the magnetism resides in the iron, its development need be attended with no loss of the polarity of the magnet we apply to it. If we have no magnet to begin with, we have recourse to the magnetism of the earth. Bars of soft iron, held vertically and smartly hammered, or simply allowed to remain some time in that position, exhibit N polarity at their lower ends and S at the upper. On such a bar, place a small rod of soft steel, and with the N end of a second iron bar, rub repeatedly the portion of the steel over the N end of the first bar; and the other portion with the S end of the iron. This last part of the steel will exhibit a feeble N polarity, and the other end S polarity, which will be permanently retained. Uniting a number of these pieces of steel, taking care to have their similar poles all directed the same way, we have a magnet of some power. Capt Scoresby, when his ship was frozen for months in the Polar Sea, amused himself with making powerful magnets, beginning in this method with some common iron bars.

Whenever we have a magnet, the process of developing by it the magnetism in other bodies is a simple one. To do this we place the N pole of the magnet on the middle of a bar, moving it along to one end, and repeating this operation a number of times. This end will have a S polarity. Rubbing the other end in like manner with the S pole, it will acquire a North polarity. A still better effect will be produced by a Magnetic Battery, consisting of a number of simple magnets, united with their poles in the same direction; and which will be nearly as strong as the sum of the forces of the individual magnets; a portion of the force being lost by the cross attractions of the N poles for the S poles etc.

Saturation. Soft iton temporarily magnetized by the vicinity of a magnet loses its magnetism as soon as the latter is removed. When tempered, it will still retain its polarity and the harder the steel, the greater the degree in which it may be rendered permanently magnetic. Even steel however is less highly magnetic when the exciting magnet is withdrawn from it, the latter circumstance being followed by a gradual diminuation of the steel’s polarity down to a certain point where the loss ceases. A bar magnetized to this point is said to be saturated with magnetism.

The most simple and efficacious method of speedily developing high degree of magnetism is that called the Double Touch. If the N and S ends of a magnet (fig. 4) be applied within a small distance of each other to the surface of a bar, the some of their forces will tend to make the atoms between them oppositely polar; while the contrary tendancy on the atoms beyond is the comparatively feeble effect of the differences of these forces. As the double magnet then is moved over the bar, each atom coming succesively under it is rendered highly polar in the reverse direction, but little of which polarity is lost, when by the motion of the magnet these atoms becomes external. In this way by rubbing a magnetic battery forward and backward a few times on a bar, it may be rendered highly magnetic. By reversing the ends of the battery, and it this way rubbing the same bar, its magnetism may again be weakened and gradually destroyed. Care also should be taken in putting away magnets, that their similar ends be in juxtaposition; or gradually the polarity will be weakened.

“ Various methods have been invented to touch or magnetize bars of steel. The easiest is to place them in contact with a powerful magnet.”

“ A magnet merely develops magnetism in another piece of steel, without losing any of its own strength. The principle in a latent state exists in all iron. In order to commenced (?) magnetising, a small amount of magnetism is necessary. There are several ways of developing this. 1 st . A natural loadstone may be obtained. 2 nd . By holding steel or hardened iron long in an upright position, it becomes magnetic. #d. By rubbing a small bar with the end of a large bar it becomes a magnet. By several operations of punching, drilling, filing, and bending wire magnetism is developed. After a beginning is made, other magnets can be formed in several ways.

1 st . If a needle be placed on the end of a magnet it will become magnetic. The end next the magnet will be of a different polarity from the nearer end of the magnet. This simple juxtaposition is the most ineffectual (?) way. Another similar way is to place two magnets together thus, [drawing of two bar magnets arranged in a line S pole to N pole, with a needle in between] with a needle between them.

2d. Simple touch, i.e. by rubbing that end of the steel which is to be the North, on the South end of a magnet, and that to be South, on North. If two magnetic bars are brought together at the (dissimilar) ends, and placed in the middle of a bar to be magnetised and then drawn lengthwise one one way and the other the other till they are drawn off at the ends of the bar, it will be magnetized.

3d. The Double Touch is the best way of all. The bars to be magnetized should be arranged in a parallelogram thus, [small drawing of a rectangle] with the ends which are to be similar all turned the same way. A horse shoe magnet with its poles turned the different way should be placed on one side of the parallelogram and moved round the parallelogram. The space between the poles of the horse shoe as it moves along becomes highly magnetic, while the parts with out are to a great degree neutralized. At the end the magnet should be slid off on a piece of soft iron.

Aepinus’s (sp?) method is much similar to the former. He used 2 bar magnets so that he might incline them thus [small drawing of a bar with two other bars coming off at oblique angles] with a piece of cork between them. Care should be taken in handling magnets for by a wrong touch they are ruined.”