Click on image to view a video of the electromagnet after a pole reversal. (Our suggestion for best viewing of this video … Start the video, then immediately pause it – when paused, QuickTime allows for advancing by individual frames using the left and right arrow keys – Step through the drop and catch action – This takes about 5 frames – The video was recorded at 30 frames per second, so 5 frames corresponds to about 1/6th of a second or 170 msec.) Here the supported bar will drop as the poles reverse and then snap back when they get to full strength. This drop and catch effect following pole reversal was demonstrated by Joseph Henry to his students at Princeton College. The still image here is at the point where the bar has fallen to its greatest extent and is about to be captured by the pole attraction.

Pole reversal – another drop and catch

ON THE APPLICATION OF THE PRINCIPLE OF THE GALVANIC MULTIPLIER TO ELECTRO-MAGNETIC APPARATUS, AND ALSO TO THE DEVELOPMENT OF GREAT MAGNETIC POWER IN SOFT IRON, WITH A SMALL GALVANIC ELEMENT.

“In order to test on a large scale, the truth of these preliminary results, a bar of soft iron, 2 inches square and 20 inches long, was bent into the form of a horse-shoe, 9 1/2 inches high, the sharp edges of the bar were first a little rounded by the hammer, it weighed 21 Ibs.; a piece of iron from the same bar weighing 7 Ibs. was filed perfectly flat on one surface, for an armature or lifter; the extremities of the legs of the horse-shoe were also truly ground to the surface of the armature: around this horse-shoe 540 feet of copper bell wire were wound in 9 coils of 60 feet each ; these coils were not continued around the whole length of the bar, but each strand of wire, according to the principle before mentioned, occupied about two inches and was coiled several times backward and forward over itself; the several ends of the wires were left projecting and all numbered, so that the first and the last end of each strand might be readily distinguished. In this manner, we formed an experimental magnet on a large scale, with which several combinations of wire could be made by merely uniting the different projecting ends. Thus, if the second end of the first wire be soldered to the first end of the second wire, and so on through all the series, the whole will form a continued coil of one long wire. By soldering different ends, the whole may be formed into a double coil of half the length, or into a triple coil of one third the length, &c. The horse-shoe was suspended in a strong rectangular wooden frame 3 feet 9 inches high and 20 inches wide, an iron bar was fixed below the magnet so as to act as a lever of the second order; the different weights supported, were estimated by a sliding weight in the same manner as with a common steelyard. (See the sketch of the magnet.) 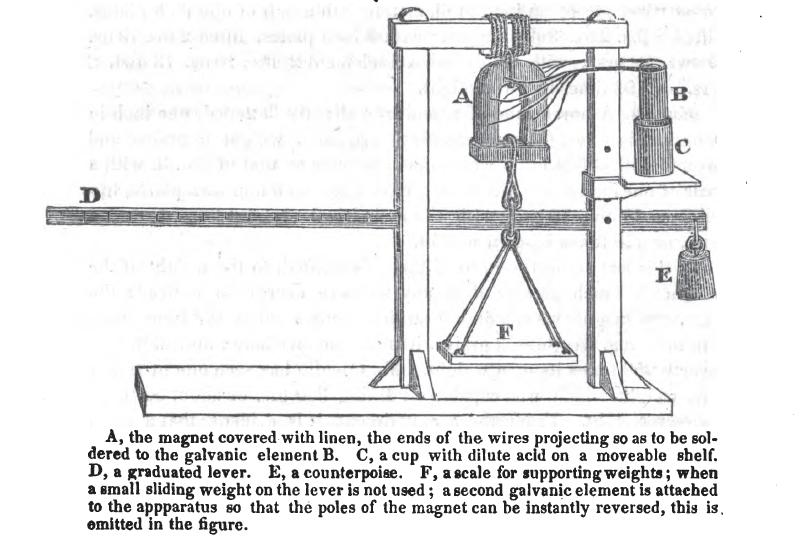 In the experiments immediately following, a small single battery was used, consisting of two concentric copper cylinders, with zinc between them; the whole amount of zinc surface exposed to the acid from both sides of the zinc was 2/5 of a square foot; the battery required only half a pint of dilute acid for its submersion.

Exp. 8. Each wire of the horse-shoe was soldered to the battery in succession, one at a time ; the magnetism developed by each was just sufficient to support the weight of. the armature, weighing 7 Ibs.

Exp. 9. Two wires, one on each side of the arch of the horse-shoe, were attached; the weight lifted was 145 Ibs.

Exp. 10. With two wires, one from each extremity of the legs, the weight lifted was 200 Ibs.

Exp. 11. With three wires, one from each extremity of the legs, and the other from the middle of the arch, the weight supported was 300 Ibs.

Exp. 12. With four wires, two from each extremity, the weight lifted was 500 Ibs. and the armature; when the acid was removed from the zinc, the magnet continued to support, for a few minutes, 130 Ibs.

Exp. 13. With six wires, the weight supported was 570 Ibs.; in all these experiments, the wires were soldered to the galvanic element; the connexion, in no instance, was formed with mercury.

Exp. 14. When all the wires, (nine in number,) were attached, the maximum weight lifted was 650 Ibs. and this astonishing result, it must be remembered, was produced by a battery containing only 2/5 of a square foot of zinc surface, and requiring only half a pint of diluted acid for its submersion.

* All the weights in this series of experiments are avoirdupois.

Exp. 15. A small battery, formed with a plate of zinc 12 inches long and 6 indies wide, and surrounded by copper, was substituted for the galvanic clement used in the last experiment; the weight lifted in this case was 750 Ibs. This is probably the maximum of magnetic power which can be developed in this horse-shoe, as with a large calorimotor, containing ’28 plates of copper and zinc, each 8 inches square, the effect was not increased, and indeed we could not succeed in making it lift as much as with the small battery.

The strongest magnet of which we have any account, is that in the possession of Mr. Peale, of Philadelphia; this weighs 53 Ibs. and lifted 310 Ibs. or about six times its own weight. Our magnet weighs 21 Ibs. and consequently lifts more than thirty-five times its own weight; it is probably, therefore, the most powerful magnet ever constructed.

This, however, is by no means the maximum, which can be produced by a small galvanic element, as in every experiment we have made the power increases by increasing the quantity of iron; with a bar similar to the one used in these experiments, but of double the diameter, or of 8 times the weight, the power would doubtless be quadruple, and that too without increasing the size of the galvanic clement.

Exp. 16. In order to ascertain the effect of a very small galvanic clement on this large quantity of iron, a pair of plates, exactly one inch square, was attached to all the wires; the weight lifted was 85 Ibs.

The following experiments were made with wires of different lengths, on the same horse-shoe.

Exp. 18. The same wires used in the last experiment, were united so as to form 3 coils of 60 feet each; the weight supported was 290 Ibs. This result agrees nearly with that of Exp. 11, though the same individual wires were not used; from this it appears, that 6 short wires are more powerful than 3 of double the length.

Exp. 20. The same wires used in the last experiment were attached to a small compound battery, consisting of two plates of zinc and two of copper, after the plan of Prof. Hare, and containing exactly the same quantity of zinc surface, as the element in the last experiment; in this case the weight lifted was 110 lbs., or nearly double that in the last. This result is in strict accordance with that of Exp. 7; the two plates having more “projectile force,” and thus producing a greater effect with a long wire.

In these experiments a fact was observed, which appears somewhat surprising: when the large battery was attached and the armature touching both poles of the magnet, it was capable of supporting more than 700 lbs. but when only one pole is in contact it did not support more than 5 or 6 lbs., and in this case we never succeeded in making it lift the armature (weighing 7 lbs.). This fact may perhaps bo common to all large magnets, but we have never seen the circumstance noticed of so great a difference between a single pole and both.” 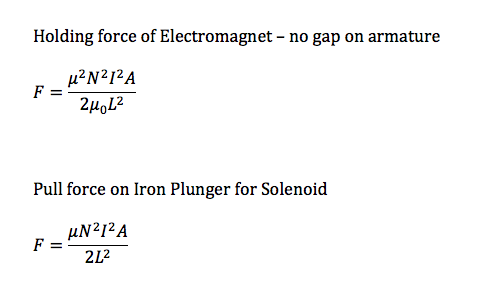