As the Professor of Natural Philosophy and a fervent member of Whig Society, Henry did work on a map of the campus in 1836. It was submitted and adopted by the Trustee but in the end, the development of campus did not follow the plan. Did Henry play a significant role in designing the Campus?

This is Henry’s earlier sketch map drawn for his brother, James Henry in February 9, 1833.

Below is another excerpt sent to Joseph Henry from John Torrey:

“Tell Mr. [Albert Baldwin] Dod, I hope he will work at the map of Princeton, for I wish to have it lithographed at West-Point. It should be on a scale sufficiently large to indicate the principal localities where the rarer plants are found.”

It explains how Henry and Dod have worked together to publish a map of the campus. However, the drawing has not been found until today.

In a lithographed circular (American Whig Society Circular), dated August 30, 1936, an appeal for funds to build a new hall for the society was made. Here the members of Whig Society, including Joseph Henry, drew the plan for the campus.

“The erection of the new Halls is intimately connected with the improvement of the College grounds, as these edifices can be so placed in reference to the buildings now erected as to form with the latter a convenient and beautiful architectural arrangement. The plan of the disposition of the whole will readily be understood by a reference to the annexed Map.”

Professor Henry suggested that “a quadrangle should be made in the ‘back yard’, as the Cannon was then called … [consisting of] Nassau Hall, East College, the two halls (Whig and Clio), and West College.” Among other changes, Henry proposed that a site for a chapel be reserved midway between where Whig and Clio Halls were intended to be; it was voted down. Considerable attention was paid to the Joseph Henry Plan; nevertheless, as will be observed in the course of this history, numerous departures from it were made.

The original Halls of the American Whig and Cliosophic Societies were built in 1837-1838, much to the relief of the members who had earlier used cramped quarters in Nassau Hall and then Stanhope. The halls were copied from a temple on the Island of Teos, while their columns were from the temple of the Ilissus. 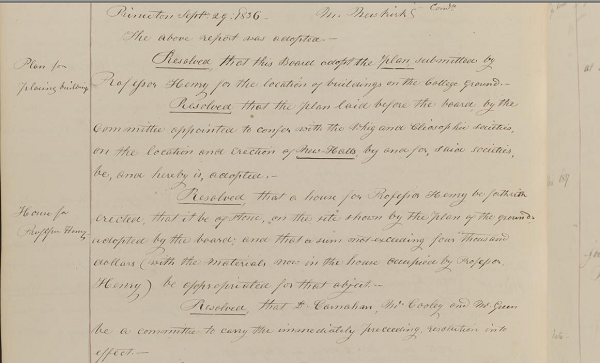 Later the College Trustee accepted the plan such as follow:

“Resolved, that the plan laid before the board, by the Committee appointed to confer with the Whig and Cliosophic societies, on the location and erection of New-Halls, by and for, said societies, be, and hereby is, adopted.”

Although the College Trustee decided to adopt the plan as to their minutes on September 29, 1936, Henry’s later annotation to American Whig Society Circular (August 30, 1836) tells otherwise. The idea is to clear the path from the Whig and Clio Society buildings (built in 1837-1838) to Nassau street. However, both Steward’s and Joseph Henry’s houses blocked the path and consequently relocation is needed for both houses. Joseph Henry, a proponent of the letter, was much upset as he realized this later after 1838.

“The following letter was written by myself and the appeal [was] by Dr Brackenridge. The plan of the improvement of the grounds is also due to me. The buildings were erected during my visit to Europe and I regret that the committee did not strictly adhere to the plan. The buildings should have been put as in the plan on the back line of the college grounds and then space would have been left for building lots between the colleges and the halls.”

Although Henry’s contribution seems to be significant in this chapter of history, some people think that Henry did not contribute much to the plan. Here is the quote from Princeton University ‘An Interactive Campus History 1746-1996’ website which talks about all the buildings in the campus:

“One would be mistaken to attribute too much significance to the Henry plan, however. Although it certainly represented the first formal attempt to diagram the campus and identify locations for future construction — and also clarified the idea that the College had two main areas centered on Nassau Hall, the front and rear campuses — to a large degree Henry was simply codifying the results of decisions that had already been made.”