Among one of the collections in Princeton University is a thermoelectric device, which is believed to be used by Joseph Henry for the sunspots experiment. See the picture below. 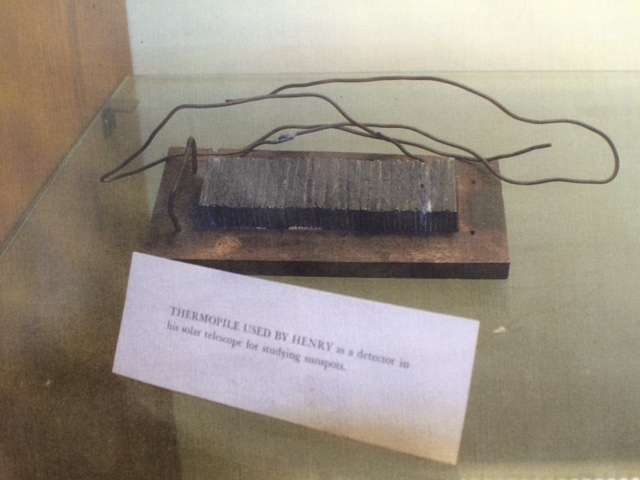 After researching on the historical literature on thermoelectricity of Joseph Henry, we found that the statement in the photo above is not correct.

There are lots of evidence saying that Joseph Henry used a thermomultiplier, designed by Melloni of Paris, on sunspots experiment. 29th November, 1841, Joseph Henry sent a letter to Macedonio Melloni to request a help on inspecting the thermomultiplier prepared by Ruhmkorff of Paris, which is to be used by himself. On 4th January, 1845, Joseph Henry did the sunspots experiment with the thermomultiplier. In a report made by Joseph Henry to the American Philosophical Society on June 20, 1845 (“Observations on the Relative Radiation of the Solar Spots), it was clearly stated that “The thermo-electrical apparatus used in these experiments was made by Ruhmkorff, of Paris”. In the syllabus of Prof. S. Alexander’s Lectures on Astronomy, P128, “Effects of the spots upon temperature – is not yet decided ; but that their relative temperature is less than that of surrounding portions of the disc, appears from the recent experiments at Princeton, with the thermo-electric apparatus of M. Rumphkoff”

The thermopile shown by the pictures above, cannot be the thermopile inside the thermomultiplier. The length and width of the thermopile above is 137.89mm (5.43 inches) and 37.30mm (1.47 inches). According to the description made by Joseph Henry on the device, on 29th June 1837 when he visited Melloni, the device should be “very short not more than 3/4 or 7/8 of an inch. The whole is not more than 3/4 of an inch in diameter“. The discrepancy in dimension is large. The thermopile inside was described in Cameron Henry notes, saying that “A number of bars of bismuth and antimony are placed parallel touching only at the ends, in a tube“. Also, according to the record of experiment written by Joseph Henry on 4th January, 1845, the images of the sunspots were around 3/4 of an inch (which matches the diameter of the thermopile). It says “The black part of the spot was about 3/4 of an inch in diameter a little larger in one direction than in the other“. And it does not really make sense to use a thermopile of dimension that long to measure the heat of a sunspots of only 3/4 inches (Note: the thermopile we have is sensitive to heat from bottom or top, not from sides)

Description of the device

The artifact we have is consisted of 25 pairs of flat plates, with paper silk in between them. The plates are connected in a “zig-zag” manner with only ends connected.

The EDS (Energy Dispersive X-Ray Spectroscopy) is telling us that the thermopile is composed of bismuth and antimony. See the figures below: 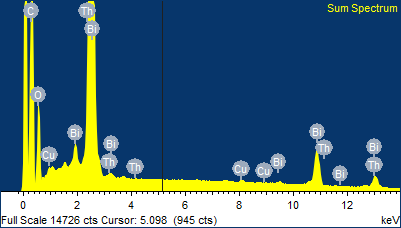 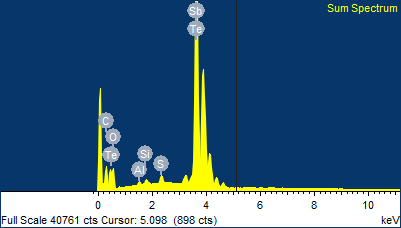 Both Sb(Antimony) and Bi(Bismuth) are identified in the thermopile. Together with the fact that a significant thermoelectric current generated by heating the artifact (see “Experiment”), there is little doubt that the thermopile is made out of Sb and Bi.

A thermoelectric battery used in lectures of Joseph Henry

In Cameron Henry note of thermoelectricity, it says “We may construct a compound battery of a number of flat plates, each pair of which are kept from contact, except from below, by paper intervening“. This matches with the artifact that we have. The description of how the thermoelectric-battery was used is mentioned in both Cameron, and Daniel Ayres Jr. Notes. In Daniel notes, a picture of the experiment done in class is shown.

The lower part of the thermopiles (PP’) is put into freezing mixture(FHI) and a hot iron bar is placed above(cɛQ). A shock can be produced with copper wire connected to it, from Cameron notes “If now we place at hot iron upon top, and a freezing mixture below, and allow the electricity to pass through the coil, we may give shocks, and by breaking the connection on a file, sparks may be shown, thus proving that it is electricity”