(Strongly supporting the telegraph, and suggesting that electricity as a moving power is not ready for application)

MY DEAR SIR: I am pleased to learn that you have again petitioned Congress in reference to your telegraph, and I most sincerely hope that you will succeed in convincing our representatives of the importance of the invention. In this you may, perhaps, find some difficulty, since, in the minds of many, the electro magnetic telegraph is associated with the various chimerical projects constantly presented to the public, and particularly with the schemes, so popular a year or two ago, for the application of electricity as a moving power in the arts. I have asserted, from the first, that all attempts of this kind are premature, and made without a proper knowledge of scientific principles. The case is, however, entirely different in regard to the electro magnetic telegraph. Science is now fully ripe for this application, and I have not the least doubt, if proper means be afforded, of the perfect success of the invention.

The idea of transmitting intelligence to a distance by means of electrical action has been suggested by various persons, from the time of Franklin to the present; but until within the last few years, or since the principal discoveries in electro magnetism, all attempts to reduce it to practice were necessarily unsuccessful. The mere suggestion, however, of a scheme of this kind is a matter for which little credit can be claimed, since it is one which would naturally arise in the mind of almost any person familiar with the phenomena of electricity; but the bringing it forward at the proper moment, when the developments of science are able to furnish the means of certain success, and the devising a plan for carrying it into practical operation, are the grounds of a just claim to scientific reputation as well as to public patronage.

About the same time with yourself, Professor Wheatstone, of London, and Dr. Steinheil, of Germany, proposed plans of the electro magnetic telegraph, but these differ as much from yours as the nature of the common principle would well permit; and unless some essential improvements have lately been made in these European plans, I should prefer the one invented by yourself.

With my best wishes for your success, I remain, with much esteem yours, truly, 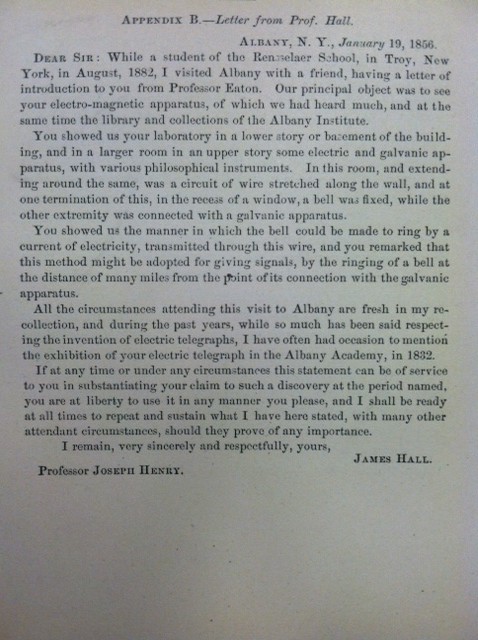