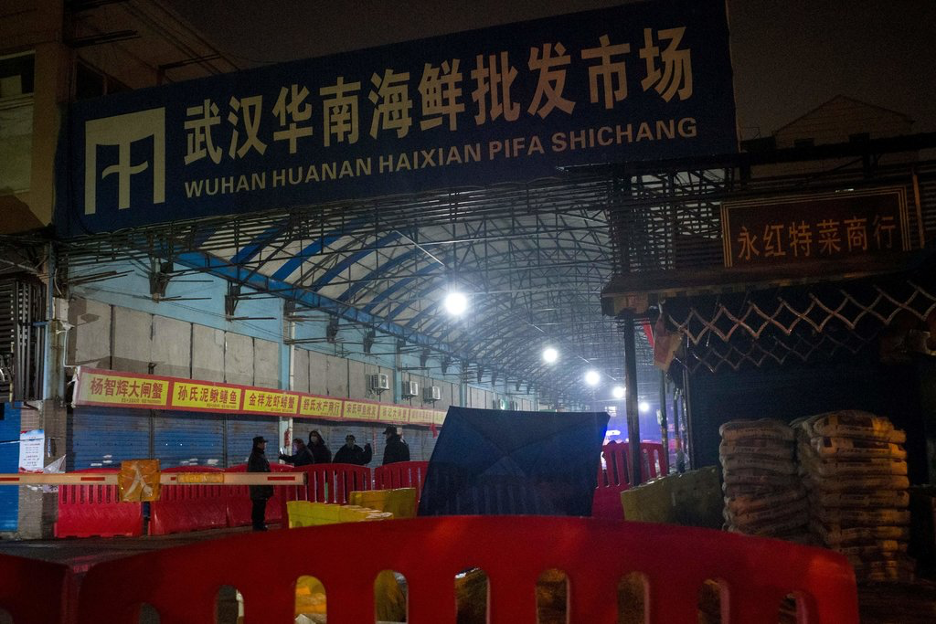 Our project is a visual timeline of key moments illustrating the emergence and progression of the COVID-19 pandemic. We start with the suspected origin of the virus at the Huanan Seafood Market and end in the uncertain present. In our timeline, we also illustrate a divergence of attitudes and reactions to the spread of the virus. 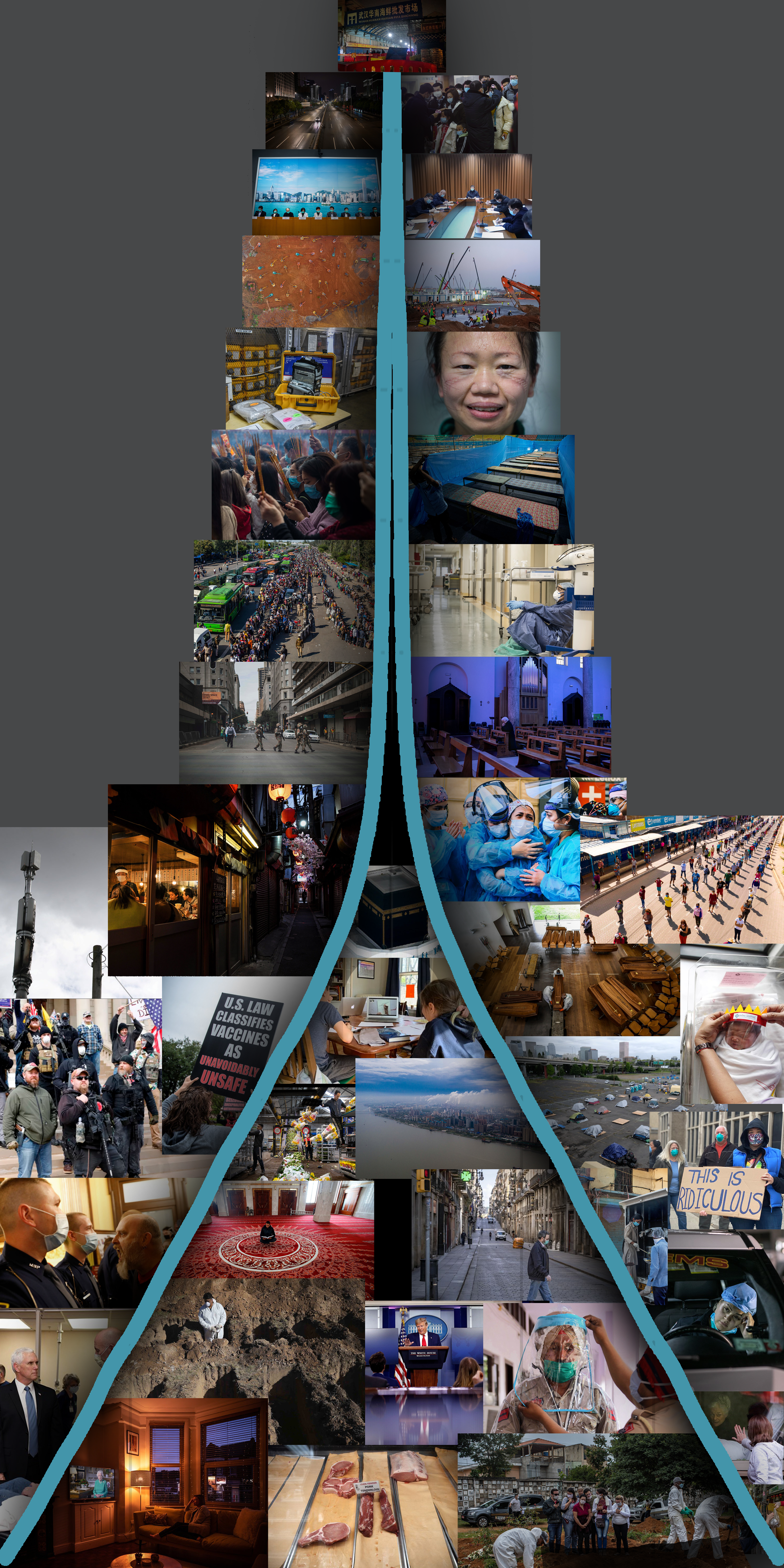 For our final creative project, we wanted to show the progression of the 2019-2020 COVID-19 pandemic through a visual timeline that illustrates the different impacts of and views surrounding the pandemic. Our timeline begins with a picture of the Huanan fish market where it is suspected that the virus originated and proceeds through to images of the events of the present day. We wanted to visually illustrate the rapid spread of the virus by paralleling an increasing number of pictures on our timeline with the virus’ sudden explosion during recent times. In addition to portraying the actual, physical impacts of the pandemic on everyday life, we also wanted to portray the divergence in attitudes and reactions towards the spread of the disease. We illustrated this divergence with a curve mirrored over a central axis that represents the increase in the total number of COVID-19 cases from the start of the pandemic to the present time. These two identical curves split our images into 3 categories: the images on the left portray the subset of the population that reject the global response to socially isolate, while the images on the right portray those that accept and follow the general institutional responses to contagion more closely. The images that run between the two lines portray the impact of the disease on institutional domains (i.e. educational, political, religious, environmental spheres, etc.). Our central subset of images more closely follows the images at the beginning of the timeline, where the pictured events don’t follow any polarized opinion and serve simply to show the physical realities of the pandemic.

The progression of the disease’s spread has unequivocally impacted the lives of every individual to varying degrees. Furthermore, the disease has impacted society at large in that established processes such as economic/social/political functions have been disrupted. These impacts/disruptions and the responses that arose from them parallel our discussions of “the plagued city”, in which not just the individual but also the collective is impacted by biological afflictions. In the case of the current pandemic, the situation has escalated beyond just a discussion of a “plagued city” to reach that of a “plagued world”. Our images show the impacts on institutions worldwide from police officers in India having to wear PPE, to the Kaaba in the holy city of Mecca being vacated, to children in the U.S. needing to study away from physical classrooms. One way we had tried to illustrate this wide scope of the pandemic was by having the images fill up more and more of the page as the timeline progresses until the entire bottom of the page is covered in pictures.

In Discipline and Punish, Michel Foucault discusses how, in a plagued city, disciplinary measures taken to fight contagion are often veiled attempts at maintaining social control and consolidating power: he cites the actions of authorities in the 17th/18th centuries who broke into homes to enforce institutional contagion policy. Recently in the COVID-19 pandemic there has been an ideological split on this issue of perceived institutional control, which we tried to portray in our visual timeline. There have recently been protests worldwide against quarantine and lockdown measures and the general responses to the epidemic. These protests reflect personal beliefs that current pandemic policies have been encroaching on individual freedoms, which supersede the welfare of the collective. Conversely, there has been a significant portion of the global population that believe in the maintaining of collective health and don’t view the same lockdown policies as overreaching into their individual lives. We tried to show this difference in perspectives by physically separating the images of lockdown protests and images of people violating social distancing from those of the workers at the frontline and those who try to maintain social distancing from each other. The ideological split represents the differing perspectives regarding the universal trade-off that societies face in times of a plagued world: how much control can we give to institutions to try to improve the collective health before we give them too much?

As we tried to synthesize our narrative for our creative project, we began to see how difficult it is to categorize peoples’ perspectives and situations. At the beginning of the process of obtaining and compiling our pictures, we thought that we could illustrate a difference in how the virus affected the situations of those who were at the frontline (the essential workers) as opposed to the situations of those who could safely distance themselves from the pandemic at home. However it was difficult to portray the photos in this way without seeming too unnecessarily critical. As we were compiling more images, we began to see a more general ideological split based on the attitudes towards the situation rather than a split based on one’s situation. It’s difficult even now to fully categorize perspectives under one criteria, and it was also challenging to not to let our personal perspectives or opinions impact our portrayal of the two sides in our narrative. Ultimately, we made a decision as we developed a familiarity with our material and changed our categorizations accordingly. Though others still may disagree with our categorization, our visual timeline remains an artistic collection and is open to interpretation by the viewer.