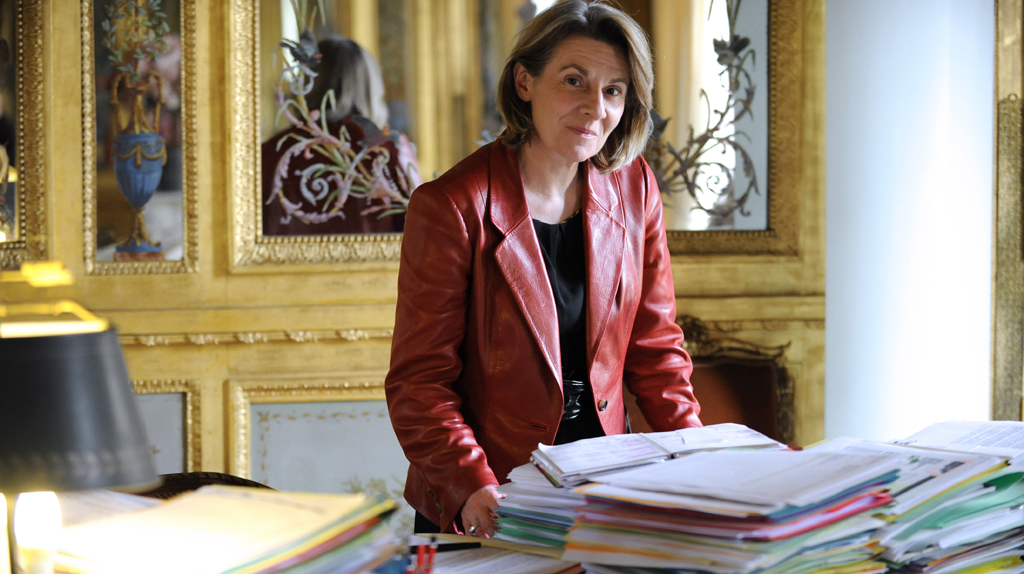 Catherine Pégard has inhabited three distinct worlds. She has been a journalist, a political advisor, and is now the current president of Château de Versailles. One would think these worlds would overlap, or that the boundaries between them would start to dissolve. Instead, Pégard’s ability to keep these worlds separate in her mind is one of her greatest strengths.

“In France, we aren’t used to having different lives,” said Catherine Pégard in an interview on Thursday. “But I’m very lucky,” she continued. “This is my third.”

Any one of Pégard’s three careers would be enough for most high-achieving people. But for Pégard, one of the most important and visible women in French politics and journalism, one life was not enough.

Pégard quickly rose to positions of power as a young journalist. She started writing for the French political newsmagazine The Point in 1982, covering politics. In 1995, she became the editor of the paper. While she was a young working journalist, she met the young French politician named Nicolas Sarkozy. This meeting would lead to another big break; soon after Sarkozy became president in 2007, he hired Pégard to be his political advisor.

The move from the world of politics to the world of journalism was bizarre by French standards, and also for Pégard herself. Pégard had spent much of her life covering French politics, only to suddenly find herself an important political figure. “It is most difficult to know what to do on the other side,” she said.

The French were not used to a journalist who would leave journalism for another high profile career, let alone a career that would transform her into the kind of politician she’d written about for years. “I was creating myself at the same time during it, living it,” she said.

Though her career path was unconventional, having access to both backgrounds proved useful in Pégard’s political career. More than anything, it seems to have given Pégard context for understanding both worlds, as well as where they align, and where they conflict. Pégard disagrees with journalists who say that if they spend enough time with politicians they are covering, they will take on too much of their influence. “I think that is stupid,” Pégard says. “That means they are weak!”

At 63, the Le Havre-born Catherine Pégard knows who she is, even if that means she needs to intensely compartmentalize her life. As Pégard constructed her identity as a journalist-turned-politician, she was careful to keep her new career distinct from her new one. When she became Sarkozy’s political advisor, she asked not to be involved in the press. “It’s not easy not to be a journalist,” she said.

Pégard succeeded in keeping the boundaries distinct between her old life and her new one, even if this task proved challenging. “She was correct, and very strict,” said Elaine Sciolino, former Paris bureau chief for the New York Times and current Princeton professor. “Once she went to work for the government, she became loyal to the government. She was always correct with us [journalists].”

Though Pégard felt like an outsider as a former journalist in the world of French politics, her next job would be equally unexpected. When she became the president of Château de Versailles in 2011, Pégard did not have any curatorial experience. Yet that did not mean she was unprepared.

President of Versailles is a political position. She received her job as a presidential appointment in 2011, but performed so well in the role that she managed to keep her job after her five-year mandate finished;  Hollande, Sarkozy’s successor and rival, chose her to continue.

Pégard also cites her journalistic career as a helpful background for her job at Versailles. As Pégard’s journalism career informed her political one, it has continued to inform her post at Versailles. Journalism taught her the importance of honesty and staying true to her story, and provided her the toolkit to be a successful president of Versailles. “You need to be a journalist to be here,” Pégard said.

Each of Catherine Pégard’s previous jobs has helped her with her subsequent positions, so long as she has been able to keep them separate in her mind. This trend seems like it will continue, as Versailles attempts to adapt to the new media environment. Just as journalists must now know several different jobs to be successful, including television and video in addition to storytelling, Catherine Pégard’s position now requires her to engage with the modern world. She has done so in the same way as many modernizing media companies: by utilizing the storytelling power of Twitter.

“We do tweets at Versailles,” she said, grinning. “I am very proud of it. Now I tweet every day!”