When Carmen Mariscal was 22, she was in a serious car accident. Sequestered for months in a hospital in Mexico City, she began to think about the human body. She thought about its vulnerability. She thought about how it can trap us, limiting us in its shortcomings.

Days before she died, Mariscal’s grandmother gave Mariscal her wedding dress. The dress stayed in a cardboard box for nine years until one day, it became the central subject of a series of photographs.

A friend of Mariscal’s once told her that every artist follows one subject throughout their work. For her, it’s three in one: memory, entrapment, and fragility. The wedding dress contains with in it notions of family lineage and the constriction of the body. Even today, she is working on building a wedding dress made entirely of wife and miniature handcuffs.

Mariscal was born in Palo Alto in 1968 while her father was a student at Stanford. “Before everyone knew about Palo Alto,” she said, laughing. Her family soon returned to Mexico City, where she spent the rest of her childhood. At 18, just after graduating from high school, Mariscal spent a year in France studying drawing and art history at la Sorbonne. She returned to Mexico City for her Bachelor’s degree in Art History at the Ibero-American University, then did her Master’s Degree in Fine Art at the Winchester School of Art in the U.K. and Barcelona.

Six years after her wedding, she moved to France permanently to be with her husband. France had been a dream of hers since her childhood, and she finds inspiration in the city even today. It was not difficult to fit in, since she spoke French already. Besides, in her experience, the French love Mexicans.

Yet she has not assimilated fully. “I have an accent and I always will,” she said. She recalled a time when she was standing in line and a man told her to ‘go back to where [she] came from’. “It’s always hard to be a foreigner. Always.” Yet she would like to become French in order to vote and participate politically.

In Paris, she has found inspiration in the communities she has built and in the city itself. She has many Mexican artists as friends, and she meets weekly with a group of female artists who collaborate on different performance art projects.

Though she has found inspiration in her alliance with other female and Mexican artists, Mariscal does not like to be categorized by her identity. “I want to be an artists, period. Nothing more.”

Mariscal has produced solo shows in France, Spain, Mexico, the U.K., the U.S., and Russia. She loves to present her work abroad. “Every audience is different,” she said. “Everyone perceives [the art] differently.” In Kuala Lumpur, people were terrified of a piece in which she suspended wedding dresses mid-air, because they saw ghosts in the hanging white cloth.

Mariscal is a mother of four young children, three girls and a boy. They live all together with her husband, a lawyer, in a tall apartment building minutes away from her studio. She teaches art classes in English to American students at the Paris campus of Trinity College, and she is preparing for three upcoming exhibitions in the next year. 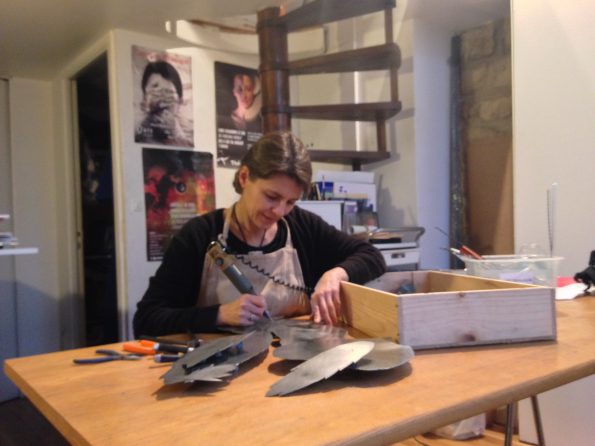