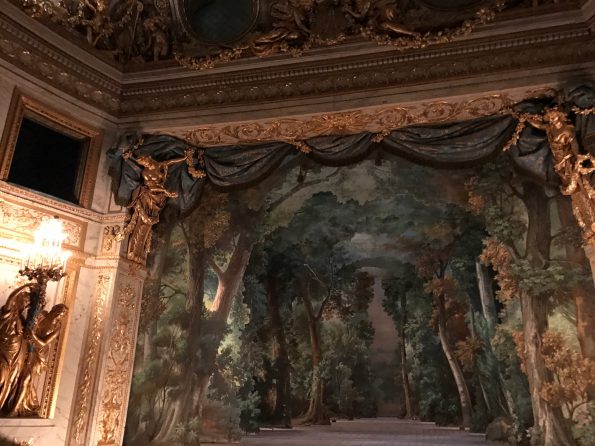 The private theatre of Marie Antoinette, one of the most luxurious renovations, in her chateau.

VERSAILLES, FRANCE – In today’s Digital Age, the threat fake news is on the rise. But don’t forget, this isn’t the first time fake news has delivered real damage.

The scenic chateau of the famed French Queen Marie Antoinette is tucked away a mile behind the grand Palace of Versailles. The manor was restored by Napoleon Bonaparte in the early 19th Century. Today, the small palace serves as a memorial to its most famous accompaniment, Marie Antoinette. Traces of Marie Antoinette and the gossip that tainted her reputation remain scattered throughout the chateau.

Marie Antoinette was born the Archduchess of Austria. At the age of 14, she was sent to France to meet and wed the soon-to-be King of France, Louis XVI. But Marie Antoinette didn’t get the memo: the overtly ostentatious lifestyle of Austrian royalty was very much out of style with the French proletariat. “She made mistakes from the very beginning,” said Bertrand Rondot, Chief Curator at the Palace of Versailles.

When Louis XVI gifted Marie Antoinette the chateau, she set about redecorating the place – with little mind to budget. The “LL” medallions of the king were replaced by her own initials “MA” and baby eagles, the Austrian symbol, were added to décor sporting France’s symbol of the rooster. 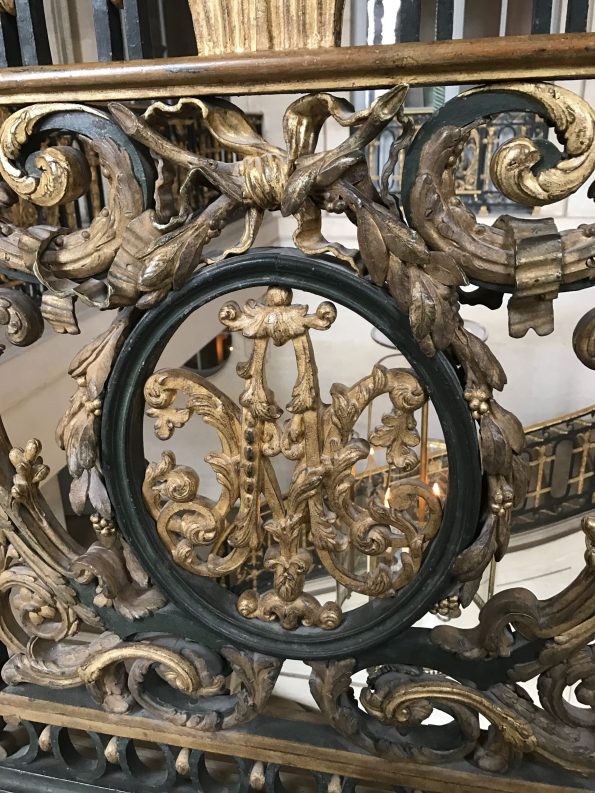 The initials of Marie Antoinette hidden in a metal medallion in her chateau.

The new Queen ordered countless ornate furnishings. There were so many that her new purchases had to be systematically registered and organized by numbers. The total sum spent was so large that one of her servants burned the furniture records out of fear for the Queen’s life. 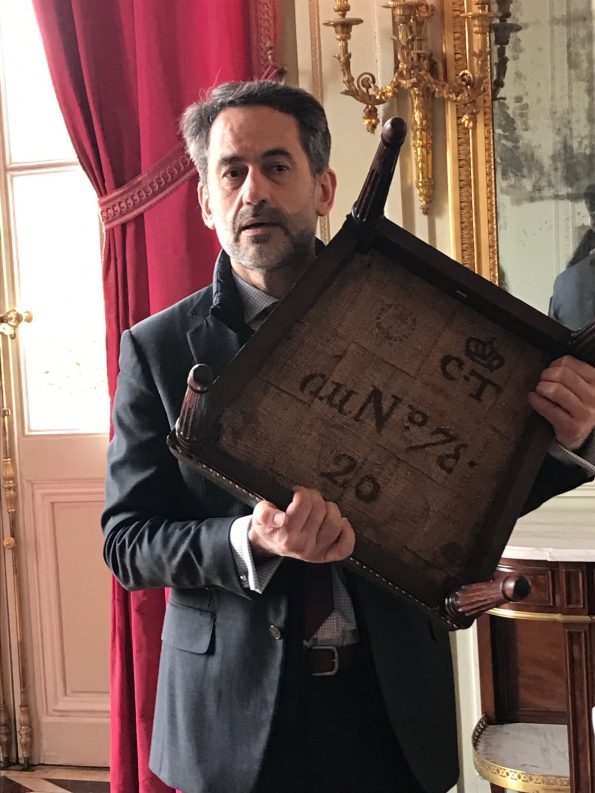 Bertrand Rondot, Chief Curator at the Palace of Versailles, holds up a parlor chair from Marie Antoinette’s chateau. A number to locate its spot in the chateau is stamp on the underside of the cushion.

While the Queen broke the budget on furnishing her new home, the rumors of her lavish spending went far beyond. A scandal broke in 1785 when a diamond necklace of more than 5,000 carats was falsely purchased in the name of Marie Antoinette – who never saw the diamonds, neither before nor after the “purchase.” Despite her innocence, her reputation as a spoiled over-spender was set in stone. Rondot says, “That was a total disaster for Marie Antoinette.”

The trail of the origins of the gossip that destroyed the reputation of Marie Antoinette can be tracked in her former home. One of the greatest struggle of Marie Antoinette was her fight against the vicious fake news of her time. Too bad, as Rondot says, “the monarchy lost that battle.”