A towering wrought iron gate opens on two sides, allowing visitors to enter number 217 on the wide Boulevard Saint-Germaine in Paris’ seventh arrondissement. As they walk up the steps to the building, a man in a well-fitting navy suit leaves the building, speaking quickly into his cell phone as he opens the door to the limo waiting for him. Visitors pass through two sets of doors—the first is wooden, painted turquoise-grey; the second, glass, imprinted with gold-flake designs. The doors are three meters tall.

Once inside, the visitors find themselves beneath a crystal chandelier floating from the high ceilings. White daylight flows into the white rooms, bestowing an air of luxury upon the space. The reception desk greets the visitors in polite French, and the building’s staff talk amongst themselves in their francophone native tongue.

The space of number 217 is old-world France. Its beauty intimidates; it owns its regality. Yet number 217 is a Latin American cultural center.

Yet though the name suggests it is a place to organize the Latin American community, it is not quite. “This house was created for the sake of the French people,” explained Husson. Though La Maison is a platform for Latin American writers, artists, and thinkers to share their work, the space exists to spread awareness about Latin America in France. All kinds of French people visit the 2-4 yearly art exhibitions and attend near-daily lectures at La Maison. “And that’s good,” explained Husson. The center’s diverse audience builds curiosity about the region in France.

The Maison is entirely financially independent. They receive no money from the governments of Latin American countries and only minor subsidies from France. They are not funded through private foundations. Instead, they rent the space out to individuals and corporations for private events. Any place, ranging from a law firm to IBM, can rent space at La Maison for conferences or seminar meetings. People even hold their weddings in the spacious garden in the back. They also make money through the restaurant and café located inside the building.

Husson emphasized that the commercial side of La Maison is entirely subordinate to the other branches. It is important that La Maison is not beholden to anyone in their exhibitions. Yet walking through the space, it is clear that renting out the building limits them. Hallways are crowded with conference attendees; company meetings require privacy and quietness.

Husson also explained that La Maison’s independence is important because it means that they do not have to answer to the French government or governments of Latin America. Yet she explained that in general, they follow France’s policy. They will not feature any Cuban or Venezuelan artists unless those artists are already exiled in France. If France were to cut relations with Cuba, she said, they would probably not feature any Cuban artists.

La Maison is currently featuring the work of Elias Crespin, a Venezuelan artist who designs mechanically-controlled mobiles that move slowly in mesmerizing patterns. Though Crespin is a proud Latin American, the exhibit’s introduction and captions to his works are all in French. In the gallery, a number of middle-aged French couples and student-aged women whispered to each other in French. 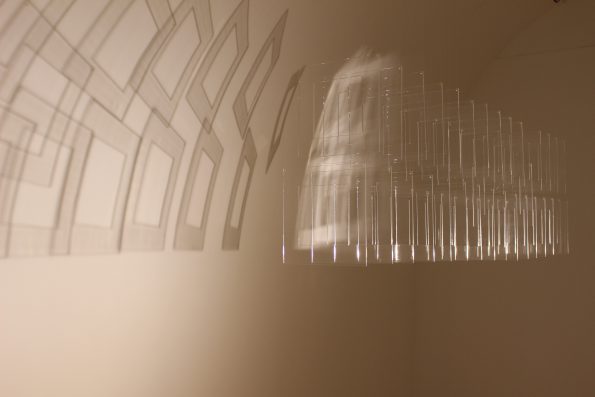 The café offered selections of Latin American food like quesadillas and “Salade ‘La Jefe’”, which is a mix of foie gras and French-style figs. The wait-staff spoke to each other in French, and pairs of older French ladies easily ordered their espresso coffees.

David del Castillo, receptionist at La Maison, explained that while many patrons of the space are French, he has met many Latin Americans through his job. Just recently, he said, a family of nine Colombians came by to see Crespin’s exhibit. It is a problem, he explained, that the descriptions were all in French, and that English- and Spanish-speakers couldn’t understand. “But that will always be a problem,” he explained. He then turned to greet two new arrivals, instructing them that the conference they were looking for was up the stairs and to the right.