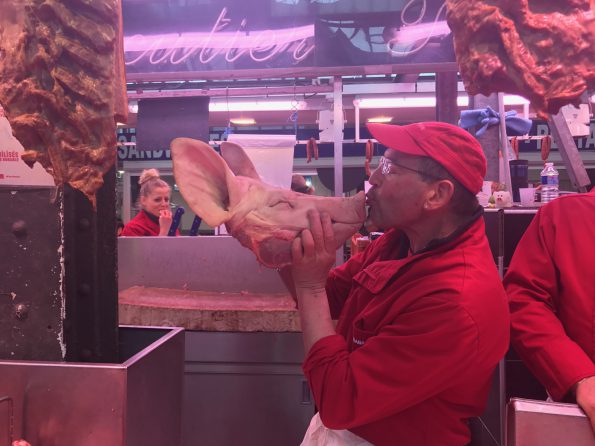 Marcel giving the famous “French kiss” to one of his products – a severed pig head.

PARIS, FRANCE – “I am going to show you the French kiss!” isn’t the exclamation most American visitors would expect – or hope – to hear from a Frenchman yielding a bloody knife in Seine-Saint-Denis, one of the most dangerous spots in Paris.

But Marcel, the butcher at Pore Frais Boiton Rabain, is a friendly guy. 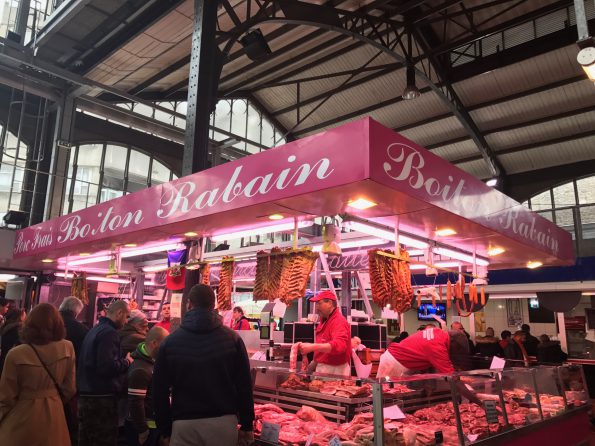 Marcel and his fellow butchers hard at work.

Waving a small group of Americans over to his shop, Marcel is true to his promise and plants a big “French kiss” on the snout of a bloodied pig head. Pleased with the shocked laughter erupting from his audience, Marcel flashes a toothy grin and hands the head off to the young butcher behind him – who promptly begins whacking the head with powerful chops. He stoops down to pick up a chunk of ear that has flown onto the ground.

This market in Seine-Saint-Denis, nicknamed the neuf trois or 93, is anything but a tourist hub – the suburb is known for its unpredictable violent outbreaks and growing impoverished immigrant community. Booths ranging from bargain produce to 2-euro lingerie and 4-euro hijabs form a maze around the streets for Sunday shoppers. Alongside these merchants, butchers like Marcel add a gastronomic flavor to the marketplace.

A few booths away from Marcel, at the Chevaline Lambert, is the fifty-two-year-old Claude. But unlike Marcel, who is one of many pork butchers at the market, Claude specializes in selling a unique product: horse.

Claude has been slicing up horse meat for 12 years. His boss who works across from him at their other booth has been in the business for 41. 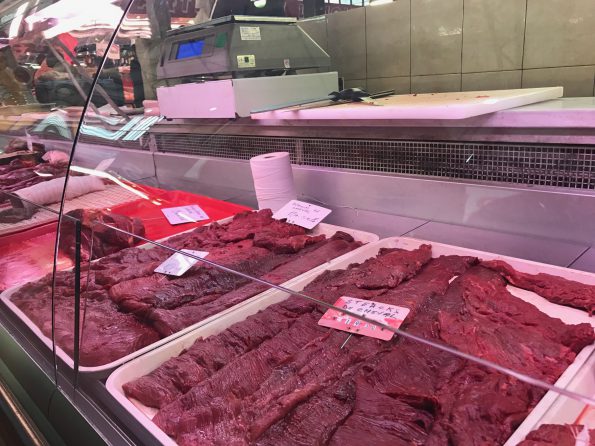 Trays of horse meat at the Chevaline Lambert.

The American troupe passes by his booth. They turn up their noses after they hear the English translation of the word cheval. Claude quickly reassures, “I have the best meat!” He rattles off his favorite reasons to buy – and eat – horse: it has loads of iron, no fat, and can be safely eaten raw.

But Claude senses doubt in his visitors. He reaches down and tears off a chunk of raw, ground cheval. He offers it to a young American girl. “Try it!” Despite his coaxing, she manages to spit out the words, “No, no! Merci, monsieur.” Amused at her fear, he proves his point himself. He pops the bloodied meat into his mouth like candy and wipes his bloodstained hands on his white apron.