Over the windows of what was once Marie Antoinette’s bedroom hang curtains covered in flowers. They are plain flowers – little bluebells that dot the white background, broken up by lines of leafy roses. The chairs, bed, table, and fire cover all bear the same pattern. Bertrand Rondot, Head Curator of the Château of Versailles, gently lifted the cotton cover off one of the chairs. Beneath the drab sheet lay glowing embroidery, pink and red roses blooming into one another set onto a yellowing golden background. 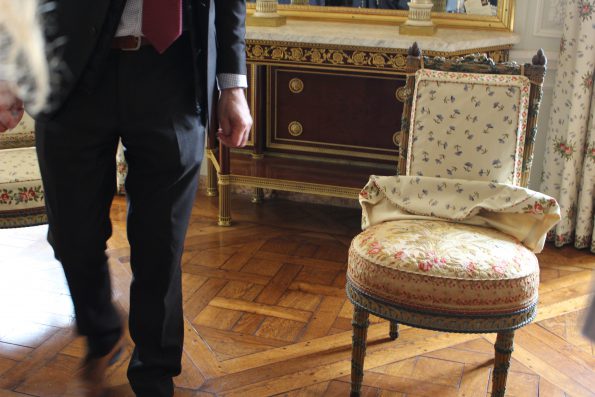 Nearly every room of this little château, a twenty-minute walk from the main palace of Versailles, is covered in flowers. Yet flowers are historically absent from the rest of the gardens of Versailles. The endless parade of blooms at le Château du Petit Trianon distinguishes this modest castle as the private space of the grandiose figure of Marie Antoinette.

The little palace was originally built for the mistress of Louis XIV, Madame de Pompadour. She died before the end of its construction, so the mistress of Louis XV inaugurated the building. When Louis XV died suddenly, Louis XVI decided the home should go to the queen, a king’s beloved, not his mistress. He gave the château to his young wife, Marie Antoinette.

Marie Antoinette spent a good part of her time in the Château du Petit Trianon. Louis XVI was committed to being available to his subjects, so the main palace became a public place during his reign. The queen would retreat to her private castle to spend time with her children, family, and friends. She even ordered that a hamlet or small village be built so that her children could experience life in the countryside.

The flowers that decorate nearly every inch of the museum today are mostly symbolic recreations, but these patterns intentionally evoke flowers of the original designs. The flowers in the house and in the garden are a constant symbol of the private nature of the château. “Here,” said Rondot, “it was a more private space, so it was not as formal as the main palace.” At le Petit Trianon, the Jardin Français did not have to adhere to the convenance, or convention, of flowerless public gardens.

If you look out the back window, you’ll see real flowers. In the Jardin Français, a long walkway leading up to the summer dining room building, rows of flower pots line long patches of grass. Some bulbs have yet to blossom, (it is not quite spring, after all,) but other rose stalks burst with red and white blooms. 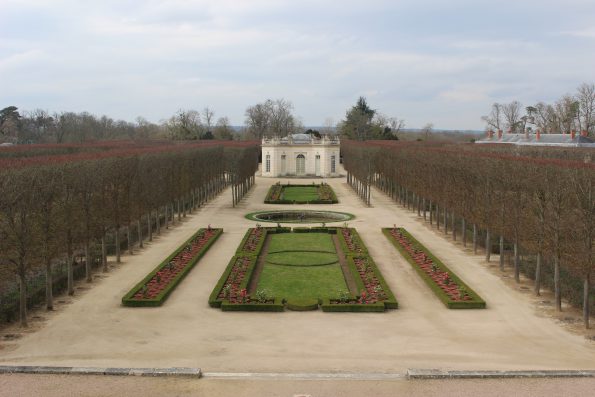 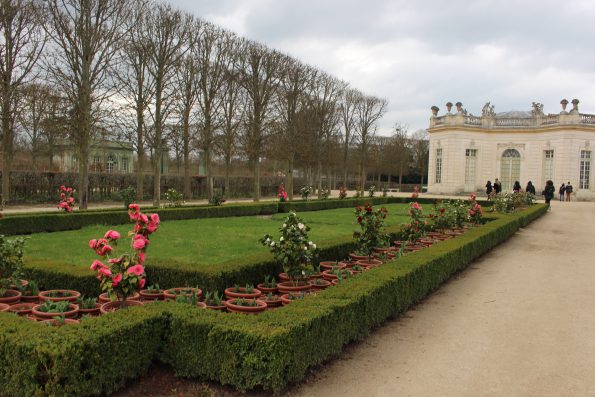 The pots, unfortunately, are plastic. “Ugh! I don’t like it at all,” exclaimed Brondot, as he eyed the offensive containers.

In olden times, when kings lived in castles and queens lived in smaller ones to get a little peace and quiet, these pots were made of terra cotta. They served a special purpose: in the night, while guests of the château slept, servants switched out the pots. In the morning, guests would awake to an entirely new garden filled with new colors.

The whole house is a subtle ode to nature – “a very sophisticated type of nature,” specified Rondot. The French love to control that which otherwise grows freely. Whether it’s the Luxembourg gardens or a flower box on a Parisian terrace, the domination of nature is a French tradition. Nowhere is this more apparent than in the angular gardens of Versailles.

Yet this dominance is an act of love. When the economically and scientifically minded Louis XIV originally planned the small estate, he made sure there were plenty of orchards. The interior design is just a confirmation of this commitment to the cultivation of nature. “The ornaments are to remind visitors that it’s the land of flowers and fruits,” said Rondot.

Though history remembers Marie Antoinette with awe, anger, and humor, the flowers of le Petit Trianon highlight her personal tragedy. She lived in the public eye starting the day of her wedding at age fourteen. Until her death at age 39, le Château du Petit Trianon was her place to bloom in private.