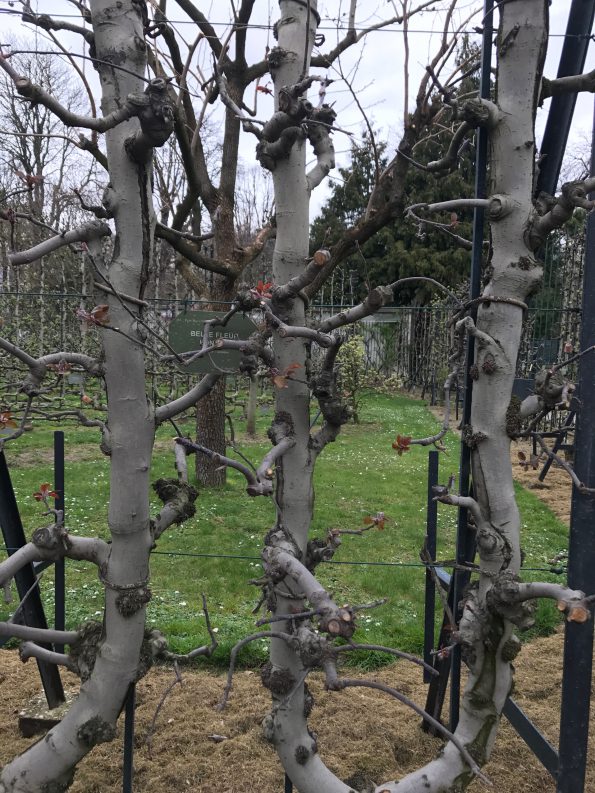 A close look into the orchards at the Luxembourg Gardens.

PARIS, FRANCE – The Luxembourg Gardens of Paris breeds crisp green carpets of grass, symmetric alleys of trimmed chestnut trees, and a wide variety of colorful tulips and daffodils that border its pathways. But a special secret hides behind the wrought iron bars of one corner of the garden: a massive apple and pear orchard.

The orchard is located in the southwest corner of the Luxembourg Gardens. It is dedicated to the production of exquisite apple and pear breeds. Each year, expert gardeners cultivate approximately 200 varieties of pears and 300 varieties of apples.

One such gardener is Franck, who works long hours inside the barred nursery. On one brisk March day, a group of curious tourists led by Alan Riding, former New York Times correspondent and part-time Paris expert, coax him outside to answer their questions. He is greeted with a bombardment of bonjours and extends a hand caked with mud stains.

Riding waves a hand to the queues of gray wooden tree trunks snaking up the tall metal bars they were bound to. “This is a perfect example of France’s obsession with dominating nature,” he says. It’s not Riding’s British bias doing the talking – Franck, too, admits the choice in orchard mapping echoes the French “style to dominate nature.” The forceful growing of the orchards robs the trees of unique growth potential – but the structured patterns conserve space in the Luxembourg Gardens and give the appearance of a well-manicured garden. For the French, order is synonymous with design and good taste. Franck says, “You could almost say every flower has a name and a number.”

The fruit delicacies stay off limit to munchers except for once a year during the European Heritage Days. During the festival, an exhibition of the best apples and pears are placed on display – and later offered in homage to other Parisians dedicated for preserving fruit.