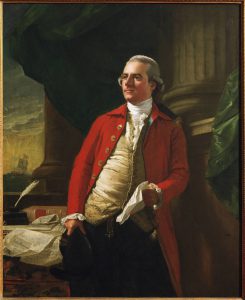 Elkanah Watson, a merchant involved in the slave trade, was born in 1738 in Plymouth, Massachusetts and is known for his posthumously published 1857 book Men and Times of the Revolution. Watson conveyed information from the Continental Congress to Benjamin Franklin while Franklin was in France and played a key role in many of the events of the American revolution.  The painter, John Singleton Copley, is one of the most respected portrait painters of his era.

In the background, a ship is sailing into the sunrise, hoisting the new American flag.  This portrait, set in England, was commissioned by Watson in 1782, around the end of the American Revolution, and the symbolic flag may have been one of the first in England. It reminds us how Watson’s life was intertwined with the birth of the new American republic. The embroidered flowers and gold tassels on his bright red coat, paired with his wig, a traditional symbol of authority in English society, depict Watson as a man of wealth and high standing.

In Watson’s hand and directly to his right on the table are handwritten letters. One of the letters on the table is visibly addressed “John Brown, Providence Rhode Island.” Brown was a merchant and slave trader for whom Watson worked from a young age. Watson’s wealth stemmed directly from a trade system based on slavery. This reality is completely absent from this portrait and illustrates the erasure of slavery and the black body from the colonial and revolutionary narrative.