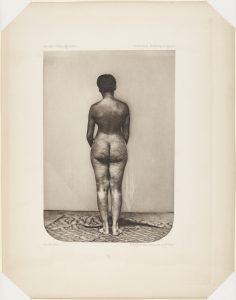 This image is part of a series of photographs commissioned by a club of French ethnographers in the nineteenth century called the Société d’Ethnographie, who studied the variety in humanity, frequently forming race-based conclusions. This photogravure features a young woman, Cora, completely nude and facing away from the audience.

Cora’s nudity and positioning have two seemingly contradictory effects. The first is a dehumanizing quality associate with nudity and the absence of her gaze. At the same time, her positioning harkens back to classical European sculpture. The statuesque pose, the vague background, the bare skin, and the expressionless – or in this case nonexistent – face all point to this. The crumpled rug beneath Cora breaks the sterile feel of the photogravure and gives a sense of intimacy and domesticity.

The photogravure of Cora is part of a long tradition of photographing black people in a way denying their humanity. Beginning in the nineteenth century, photographers such as Bertall intentionally photographed their subjects nude and vulnerable, which emphasized the powerlessness of black people in the dominant culture and justified racist notions towards black people. This particular photogravure – like many other of this type and subject matter – was part of a larger series of ethnographic materials that circulated throughout the West.
(Jennifer Bunkley)