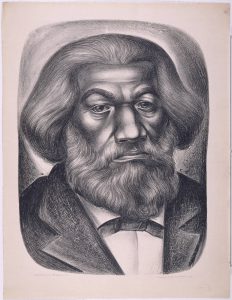 White’s lithograph creates a unique representation of Frederick Douglass. On the surface, this lithograph seems like any other reproduction of his image, but White portrays a version of Douglass askew from his typical likeness. The white space around his head forms a halo that crowns his checkered hair. The folds of skin that sag beneath his eyes suggest a fatigue that only comes with age. His eyes, framed by large, black eyebrows, give the impression of an intense focus, one compounded by the frontal direction of Douglass’s gaze. Here Douglass is a world-weary man staring back at his audience.

Douglass’s beard and hair send just as forceful a message as they occupy most of the space in the frame. Each strand of Douglass’s hair stretches neatly from his temple down to his cheek before seamlessly transitioning into the flowing hair of his beard. Such a large, elegant rendering gives a calm antithesis to the strained look on his face. It also invokes the Muralist tradition that White was trained in. Douglass’s hair and signify the knowledge and wisdom that is characteristic of a great leader. Ultimately, viewers see Douglass as a wise and praiseworthy leader who is also tired and somber. Such an attitude seems fitting in the context of a Civil Rights movement yet to bear tangible results.