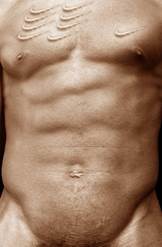 Thomas’s Scarred Chest is a digital chromogenic print from his series Branded, in which he explores links between sports, advertising, and the history of slavery through the exploitation of the black body. Here, he depicts a black man’s torso, with the Nike swoosh imprinted as scars across his breast, with eight on the left and one on the right. That the Nike logo is so indelibly marked upon his body suggests the ways in which brands like Nike have come to use people’s bodies to help sell their product.

Thomas focuses intently on the body of his subject, presenting it at larger-than-life scale, and tightly cropping the picture to remove the figure’s head or any surroundings. This cropping removes any sense of the figure’s subjectivity. The tops of the figure’s legs and his pelvic area have, however, been included within the frame; while Thomas does not show the figure’s genitalia, he strongly hints at it. The image is therefore loaded with sexuality and virility, suggesting how these have been constructed as part of black athletic identity.

The nine Nike scars on the figure are presumably from branding, referencing how slave-owners regularly branded the people they had enslaved, much like livestock, in order to assert their ownership of them. Here, Thomas suggests how corporations today profit from their associations with the accomplishments of black athletes. Within the framework of modern consumerism, anyone who wears apparel with logos becomes a form of advertisement.