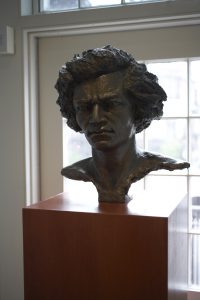 Hardison’s caste bronze bust, commissioned by the University’s African American Alumni Association (1983), adorns Princeton University’s Stanhope Hall. Unlike many other representations of the renowned abolitionist, Hardison conspicuously leaves out Douglass’s prominent beard. His bare face gives the impression of a young, passionate leader of resistance. Casting the sculpture in bronze gives Douglass’s features a literal edge. His jawline is angular and his chin is shaped in a straight line. This rigidity pairs well with the fire in Douglass’s gaze. Deep, thin lines are etched around his eyes. The deep lines of his brows, coupled with the deep lines immediately above them, bring to life Douglass’s frown. . Without the distraction of facial hair, Douglass’s penetrating stare is foregrounded and the anger expressed through his furrowed brow is brought to life.

However, it is Douglass’s hair that captures the most attention, dwarfing the rest of his features. It stretches above his head before cascading down to enclose his cheeks like a lion’s mane. This image, in turn, extends Douglass’s overall persona. His unkempt hair, paired with sharp angles and a dedicated glower, sends the message that Douglass is a force to be reckoned with. Displaying Douglass as a young radical in a space regularly filled with students seems appropriate in response to calls from the African American Alumni group.