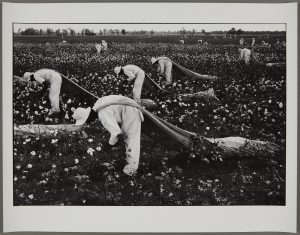 In this photograph of a work gang in action at a Texas prison, Danny Lyon underlines the historical continuity between American slavery and the prison-industrial complex . Cotton pickers resulted from a 14-month project that took Lyon to several penitentiary in the Texas Department of Corrections.

“I’ve tried with whatever power I had to make this picture of imprisonment as distressing as it is in reality,” Lyon once said. He visually constructs Cotton pickers in a way that emphasizes this despair. From our point of view, the field recedes into the distance from the foreground. The only visible sky takes up a small portion at the “top” of the image. The dozen or so cotton pickers are engulfed in a sea of cotton plants. The field consumes its workers. The vast cotton field reflects the way that the carceral state creates the myth of its own ubiquity.

Cotton pickers also emphasizes the degree to which the prison-industrial system turns prisoners into factors of production. The laborers in the cotton field are virtually indistinguishable. The figure in the foreground bends down at the waist as he picks a cotton bloom. The four figures behind him stand in almost the same exact position. These seemingly choreographed figures allude to the degree to which the state has regimented the lives of its prisoners.