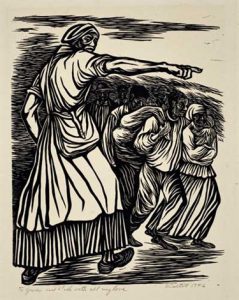 Elizabeth Catlett’s work is influenced by both her social and political concerns as well as her relationship to Mexico and its muralists who also re-interpreted and re-depicted their history. According to Catlett, her artwork is meant to “present black people in their beauty and dignity for ourselves and others to understand and enjoy.”

In Harriet Tubman, Catlett uses linocut (or carvings made on a slab of linoleum) to similarly render Harriet Tubman, the black female abolitionist who was known as the Underground Railroad  “conductor.” She helped free thousands of slaves. Further, In Harriet is one of a 15 part series called “The Negro Woman” in which Catlett presents a different narrative in each linocut. Every image represents a different part of the narrative. For instance, in two other linocuts she depicts other famous black female pioneers such as Phyllis Wheatley and Sojourner Truth.

At the time she made this series, Catlett was in Mexico and heavily influenced by the Mexican artists she interacted with. This influence and Catlett’s fascination with Mexican artists’ representation of their past, impacted her feminist reinterpretation and representation of historical black female figures in “The Negro Woman.” Catlett’s feminist ideologies bleed through Tubman’s linocut where she visually suggests the way in which Tubman embodies a queered womanhood. This portrayal of Tubman wears a dress and is hard, unyielding, and traditionally “masculine.” Catlett’s representation adds nuance to what we take to be an expression of womanhood.