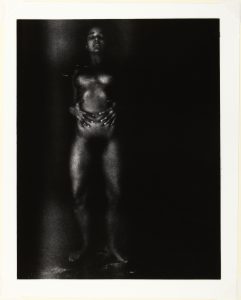 The objectification of the black body is deeply rooted within Western culture and influenced by the institution of slavery. In addition to exploiting enslaved black people for physical and sexual labor, white people also used black bodies as subjects for scientific research, often capturing them nude for detailed inspection, as seen here.

Through the very medium of the self-portrait, contemporary American artist Carla Williams contends with the objectifying nature of these photographs by assuming responsibility for her own bodily observation. Like the scientific black subjects, Williams stands nude. However, she stands with her knees bent, legs slightly apart, eyes closed, head tilted back, and hands tightly clenched on her stomach. In doing so, she resists the invasive scientific images of black subjects, who were forced to stand fully erect with their bodies and eyes directed at the camera.

Williams uses shadows to further obscure her body from surveillance. Shadows covering sexualized parts of the female body, the breasts and vulva, combat the sexual exploitation of the black body under these racist scientific endeavors. Furthermore, because she is capturing a female body, Williams shines a light on the ways in which the subjugating nature of these photographs was influenced not only by race but also by gender.