“Today we’re going to learn about cultural adjustment,” said Anita Sharma. Sharma is a cultural adjustment teacher for the high English proficiency students at Altered Minds, Inc., a federally funded agency taking part in Canada’s ENTRY program for newly arrived immigrants. At Altered Minds, newly arrived migrants learn English, take courses on Canadian culture, and are walked through the acculturation process in Canada. The class is funded by the federal government, and a prominently displayed plaque in the front office proclaims as such to all visitors.

Chinese investment migrants, who have to prove a net worth of $1,600,000 CND and invest $800,000 CND in Canada, mingled with newly resettled refugees who had come with few possessions to learn about the adjustment process in Canada. Tian-en Zhou, a Chinese investment immigrant from Beijing, China, was still placed in the same classes as Tasir Al-frata, an Iraqi migrant who had fled Baghdad.

Sharma wrote a list of four items on the board: 1) honeymoon 2) conflict 3) recovery 4) adaptation. “What does this mean, class?” she asked. They demurred. “These are the stages of cultural adaptation,” she said. One of the students, Sergey Osmanov, a Russian migrant by way of Israel quipped, “so this is the process of going from ‘I love Canada’ to ‘I love Canada, eh?’”

Sharma’s class is a higher English level cultural adjustment class, but Altered Minds teaches the new immigrants everything from Canadian expectations of child rearing (“don’t beat your children”), employment prospects (“here’s how to write a resume and cover letter”), to something as seemingly simple as traffic laws (“drive on the right side of the road, not the left”).

Grace Eidse, the founder and CEO of Altered Minds, explained that the group’s founding in 2005 came from the need to educate newly arrived migrants in the ways of Canadian life. The name came from the idea that “we are transformed when we come together,” she said. At least half of the current staff of 20 people are immigrants themselves.

Altered Minds does teach children. That job is left to the Needs Centre, another nonprofit organization that provides similar services for children. But this bifurcation of services makes it difficult for families with children to attend classes says Eidse, “people can’t attend if they have children,” since there is nowhere to get child care. 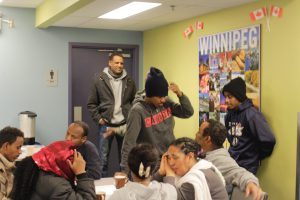 Newly arrived migrants take a break from their classes.