Against Hardship, a Garden of Joy

Dieudonne Mbarushimana has made a home in Altona, Manitoba for eight years against all odds. Mbarushimana, 43, is a Burundian refugee with a disability: He is paralyzed from the waist down. He fled to Tanzania in 2003 when he had been falsely accused of being an anti-government rebel. One unfortunate day, he fell off a tree and permanently damaged his back.

He remained in a refugee camp hospital for six years. With no one able to treat his condition, Mbarushimana had to spend those years lying on his back. The Winnipeg Free Press reported that when the Tanzanian refugee camp was about to shut down, officials attempted to relocate Mbarushimana to a third country. But it was an uphill battle: His original destination was the Netherlands, but the plans fell through when they learned about his disability. The Mennonite Central Committee (MCC) agreed to bring him to his new home through their refugee sponsorship program.

I met Mbarushimana at a lunch arranged by Ray Loewen, the president of a refugee resettlement nonprofit “Build a Village.” The lunch took place at the Bergthaler Mennonite Church of Altona, and our journalism group as well as the MCC were invited to a delicious lunch catered by a group of Syrian refugees. Mbarushimana was a delightful presence, bursting into hearty laughter whenever he could throughout the conversation. His primary hobby is crocheting. He walked me through a Facebook photo album full of these creations, most petite and colorful dolls. This is also good business for him, he says, – there is a good amount of demand for his dolls.

There is not a Burundian community in Altona, but Mbarushimana is technologically savvy about connecting with his people. He participates in a Facebook group that regularly listens to a Catholic radio network, Radio Maria Burundi, and afterward discusses the content. He also connects digitally – through Facebook, through Skype – with his friends from the Tanzanian refugee camp, who have been resettled all over the world, from Norway and Sweden to every major city in the United States. Plus, there is a Burundian community in Winnipeg, and he goes there now and then for medical checkups.

Still, food is one of the challenges that comes with this lack of a local ethnic community. Mbarushimana enjoys a special kind of eggplant which is a staple back in Burundi, but difficult to obtain in Altona. So, he decided to import the seeds and grow the eggplants himself in his garden. Again with a hearty laughter, he showed me a photo of him caressing a bunch of eggplants and boasted of his lucrative harvest. At the end of the lunch, we friended each other on Facebook and promised to keep in touch. By the time our group had arrived at Feast Café Bistro for dinner, I received a message from him, asking about my plans for the night. He also sent a photo: 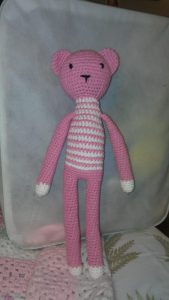 Mbarushimana said he did not have a friend who lived in East Asia, the region where I’m from. Now he does.