Print journalism might be fading, but Canadian pride isn’t. Canadians often compare themselves to Americans to feel better, especially since Trump took office. But this method of comparison isn’t new.

Bob Cox, publisher of the Winnipeg Free Press, gestured towards his spacious office on the first floor, separate from offices near the paper’s other departments, to show how the company has had to rent out the nicer offices upstairs to make up lost revenue due to a drop in subscriptions. Cox moved back to Winnipeg a few years ago, taking his second job at the Free Press. His wife thinks he’s a true Winnipegian. He doesn’t seem to object.

Canadians like rules, Cox says, so they might be less accepting of asylum seekers who don’t come “legally.” Still, he says the attitude towards refugees is one of openness. “In return, we get the country we have,” Cox said. He means the diversity—and for immigrants, this means there is no one Canadian identity that they have to take up, unlike countries like Sweden, for example. This makes it easier for outsiders to “fit in.” But what they do have in common, what’s “fundamental” to Canadian history and identity, is that they are not American. 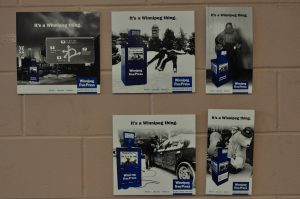 In the Winnipeg Free Press cafeteria, a series of posters titled “It’s a Winnipeg thing.” Could a non Canadian understand the references without help? I couldn’t. 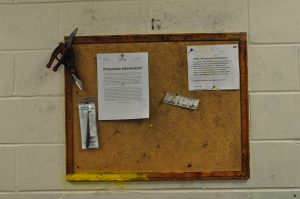 In the operation room of the Winnipeg Free Press printing room, a bulletin board with tools, rules, and a scribbled over cartoon strip. The circulation of paper is about 65,000 this year. Ten years ago, it was 130,000. One worker says he thinks the paper is at the floor, but it could probably get lower.

This same “us versus them” mentality also lies at the core of the Aboriginal Peoples Television Network. Does the station report stories that mainstream networks, like CBB, wouldn’t run? That’s the point, Karyn Pugliese, Executive Director of News and Current Affairs, said. “We’re not them.”

Now, the APTN is toying with the idea of starting a station in the U.S. The station’s coverage of Standing Rock was the most followed and viewed story by U.S. readers this year Pugliese said the station probably gained many long-term viewers after that story. Much of their audience is still indigenous; Winnipeg has the highest number of First Nations peoples in any major city in Canada.

Pugliese and Cheryl McKenzie burst into laughter more than once during the Q&A. They are cheery, and think of the network as a place where the voices of indigenous people can be heard and shared. Mainstream media sources have upped their coverage of indigenous peoples and nations since the APTN was founded—CBC has even started an indigenous unit. But this doesn’t mean the network will change what it’s doing. “Why would I want a seat at their table?” Pugliese said. “I’ve got my own table now.” 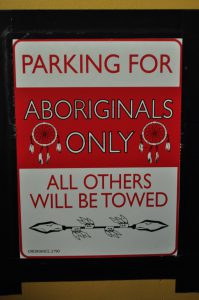 A sign on the wall of the APTN control room, above (not pictured) hang rows of comics featuring First Nations protagonists.