The Bumpy Road of Resettlement 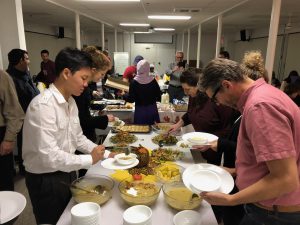 Sharing shawarma and falafel with refugees and nonprofit representatives in Altona

Altona is a sleepy little town of 4,123 people in southern Manitoba. Home to the world’s largest replica of a Vincent van Gogh sunflower painting, its residents affectionately call it the “Sunflower Capital of the World.” And now a growing population of refugees calls it home. An estimated one percent and growing of the town’s population are resettled refugees.

Dieudonne Mbarushimana came as a Burundian refugee to Manitoba by way of Tanzania, where he spent six years in a Tanzanian refugee camp. He is paralyzed from the waist down – the result of an accident when he fell from a tree. His refugee camp did not have the medical resources to perform the necessary surgery, so he laid on a hospital bed for six years, from 2003 to 2009. He became such a fixture in the refugee camp’s medical facility that the nurses and other patients would come to his bed and take pictures with him.

Eventually, he was sponsored as a refugee and came to Manitoba to be resettled in Altona. He did not speak English when he first arrived, so the pastor of the local Mennonite church tutored him in English. But now, “There’s no one else to talk to in my language,” he explained.” There were many things that I want to say but can’t. I can only talk to other people in English.” And even then, he was still working to improve his English. To his knowledge, there were no other resettled Burundians in his community.

So instead, he keeps in touch with the other Burundian refugees from the Tanzanian camp over Facebook and Whatsapp. He followed them as they were resettled all throughout the United States and Canada, but he has not been able to meet up with any of them in person since they left the Tanzanian refugee camp. He keeps in touch with his native country and the Kirundi language by listening to Radio Maria, a Catholic radio broadcasting service transmitting in Kirundi. He had even sent money to the Burundian Radio Maria pastor to get a hat and t-shirt to show Burundian pride in Altona.

The conversation over refugee narratives often fluctuates between those of “resilient survivors” and “sympathetic victims.” Mbarushimana is undeniably a resilient survivor. He scrapes together his living by helping set cutlery for residents of an apartment complex, and by selling ponchos and cartoon character dolls that he knitted. He comes to the Bergthaler church several times a week to get food from the church’s food bank. But in spite of these difficulties, he is still glad that he came to Canada.