Yahya Samatar’s red sweater is zipped up to his neck, and he stands in a corner of the room, swarmed by journalism students who bombard him with questions. “Why did you leave your home?” “How did you get to Winnipeg?” “Did you come straight from Somalia?”

To each question, he gives a shy smile and answers, “that’s another story.” In Somalia Samatar worked as a human rights activist and journalist. There, he was arrested three times, and finally released only on the condition that he would leave the country.

Karin Gordon, the executive director of settlement for Hospitality House Refugee Ministry, explains that the Somali Police Force operates on a bounty system. “They are paid $250 for each person that they jail.”

Rather than face Somalia’s corrupt political system, Samatar fled. He left behind his three children and his wife, who he did not know was pregnant with his fourth child. He spent three months in Brazil before coming to the United States, where he was arrested and detained for nearly eight months while his refugee claim was processed—and eventually, denied. He was released in Louisiana, and a Somali friend resettled in Ohio drove down to pick him up. Samatar hid from the United States police, but though his friend tried to convince him to stay in Ohio, he refused to live in a place where he could not work. Instead, he chose to cross the Canadian border and seek asylum in Manitoba.

His friend drove him past Minneapolis, and dropped him off a few hours walking distance from the Canadian border. “I didn’t have smugglers,” says Samatar, who had to make the journey alone carrying only a backpack with his meager possessions: some clothes, food, and pictures of his family. According to him, other asylum-seekers coming across the Canadian border pay anywhere between $200-$1000 CAD to human traffickers who guide them through the prairies.

Without assistance, Samatar did not know what to expect or what to look for, and he lost his way. “I had heard of Canada, but never of Manitoba.” It was an early August morning, but still cold. Samatar came upon a river—and without knowing exactly what was on the other side, he stripped down and crossed it.

A Canadian Post driver found him shivering in his underwear on the side of a road—on the Canadian side of the border. He offered him a fleece and a ride to the police station, where an extra pair of uniform pants was unearthed—“so by the time I got him, he was decent,” laughs Gordon, who drove down from Winnipeg to pick him up.

With the support of Hospitality House, Samatar filed an asylum claim in Canada, which was approved. He hopes to bring his family over—their claim has been accepted as well, and they are only waiting on the paperwork. Samatar says that they are safe in Ethiopia, and though he has never met his youngest son Adnan, they Skype regularly.

Samatar now works as a fundraising consultant in Winnipeg—and according to Gordon, “You might be hearing from him—he set up a GoFundMe to save up for their airfare.” 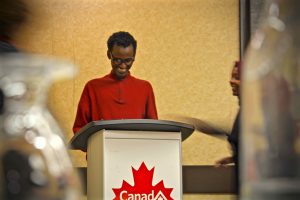