One of the ways we can shoot to edit a remote interview is by using Zoom to record multiple synchronous feeds of video, each with different content. Zoom enables you to record the Gallery view of all interlocutors and the Speaker view, made of sequence of close-ups that follows whoever is speaking during the conversation. Zoom produces these two video feeds as separate video files that we can edit together later, thereby maintaining some of the editing flexibility we would have if we were on location and able to change camera angles. The sections below guide you through the settings to ensure you obtain the correct files in Zoom.

If you are recording a conversation with other software that does not provide multiple angles and files, a number of our editing suggestions do apply to a single camera recording.

Setting up the Remote Interview

Before conducting the Zoom interview, it is important to set up Zoom recording settings to create optimal editing footage. To produce the most flexibility, you can record your interviews as three separate movie files that you can select from in editing your movie. Specifically, these are  separate recordings that display the main speaker at any time, the “gallery” view of their listener(s), and a separate file with the audio only.

Follow these steps to ensure that Zoom recording settings are set accordingly.

1. Log on to Zoom and go to “Settings” to the “View More Settings” link. When this page opens in your browser, choose Settings and the Recordings tab as shown. 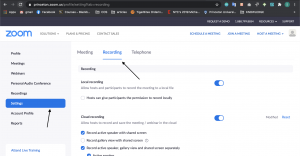 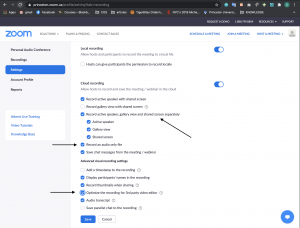 3. At the beginning of the interview, start the recording, and choose the “Record to the Cloud” option to make sure that the settings you changed will apply to your recording.

4. When the session closes, you will be able to find and download your files under the Cloud Recordings tab. 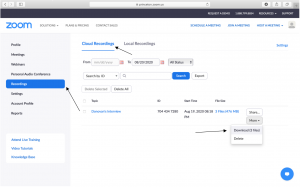 Backlighting is an important factor to take into consideration when conducting video interviews. Before the interview officially starts, make sure that both you and your interlocutor are situated in locations with natural light. Avoid bright backgrounds such as windows or bright skies, especially if the face is not illuminated or appears dark on the Zoom screen. 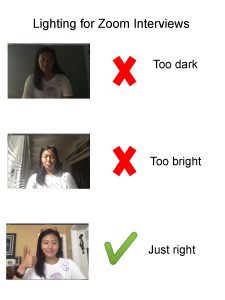 At the beginning of the interview, decide whether your interlocutor’s voice is clearer when using earphones, or not.

Decide whether to turn off a TV or music playing in the background. They may not be distracting, and they might even be a meaningful part of the context, but know that these could create continuity problems in editing. For example, if you edit an interview and the background music changes with some of the visual edits.

Finally, when your interview is finished, record a minute of “room tone” — the background sound of the room environment without conversation. You may need this in editing to smooth out background sounds.