Princeton University supports one of the most robust study abroad systems of any higher education institution in the world. For the Spring 2020 semester, Visiting Assistant Professor, Ryan C. Edwards, contributed to that travel course catalog by offering, Patagonia: From Landscape to Lifestyle Brand. The course was offered through Princeton’s Freshman Seminars program in conjunction with the Program in Latin American Studies (PLAS). Funding was generously provided by the Office of the Dean of the College and Learning Across Borders (LABs). Enrollment included twelve students from across the U.S., as well Guam, India, and Mexico. 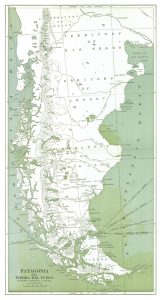 While this was the first Patagonia course offered in recent years, it continued the tradition of Princeton students traveling to the region, dating back to the late 1890s.

The course was featured by Campus Wire as one of the most innovative courses of the 2019/2020 academic year. Guest lecturers were invited to speak on the social history of glaciers and the sciences of national park management, and students would have access to a wealth of archival resources in Princeton’s Firestone and Lewis libraries. The course was designed as a reading-intensive seminar that would include a spring break trip to Patagonia that would be documented through a collective digital humanities project through the McGraw Learning Center. Students would be joined on the trip by PLAS Director, Gabriela Nouzeilles, and Ecology and Evolutionary Biology doctoral student, Sebastián B. Munguia. It would include two days in Buenos Aires, three days each in Ushuaia and El Calafate, and a day trip to El Chaltén. Along the way students would meet professional mountaineers, Antarctica tour guide operators, descendants of founding British missionaries, as well as national park biologists and ecologists.

This travel component of the class, which offers a unique and privileged opportunity for students at an institution such as Princeton, exposes some of the inherent tensions within ecotourism and conservation — two topics covered in the course. In this regard, a major component of the course included grappling with the contradictions of the green economy, the environmental impact of international travel to visit vulnerable natural features such as glaciers, and the creation of a clothing company rooted in activism that nevertheless requires a great deal of natural resources.

While our itinerary sought a zero-waste model, cutting out plastic bottles and other single-use items, the trip could never achieve a net-zero impact on the environment. The carbon footprint from out flights alone would be roughly 8,752 lbs CO2e per passenger (x15). Still, we are not powerless. We can take action as we navigate the systems that predate us and within which we must operate. Offsetting this release of CO2, for example, would require each student to plant 102 trees. Our flights therefore included carbon offsets through myclimate, a non-profit group founded through the Federal Institute of Technology in Switzerland.

But, the trip did not happen.

As with the rest of the world, COVID-19 brought the Princeton campus and all related travel to a halt. Five days before our departure in mid-March, the trip was officially canceled, and we were informed that our seminar that week would be our final in-person meeting for the class. At that point in time, confirmed U.S. cases were low but on the rise, while Argentina had less than 10 confirmed cases. It was crucial in that moment to consider the safety of the students. And just as important, the class had to recognize that we were the potential threat for Argentines and the communities that we would visit in Patagonia.

The course went on, however, and the pandemic became relevant to our subject matter. Patagonia clothing brand founder, Yvon Chouinard, announced on March 13th that despite closing all of its retail outlets and pausing online sales, the company would continue to pay all employees during the pandemic. On April 21st they announced the resumption of online sales from their sole distribution center in Reno, Nevada. Students read Chouinard’s autobiography, and reflected on the reluctant businessman’s philosophy and evolution as an industry leader and activist, thinking through his previous writings and contemporary actions.

For residents in Patagonia, the novel virus redefined a way of life that is generally already rooted in solitude and self-sufficiency. Many people who live in Patagonia have limited electricity, running water, and other common urban amenities and infrastructures. While the sparse population has therefore not been disrupted in the same ways that resident in Buenos Aires and Santiago were, the crucial connections forged by internet access needs or weekly and monthly trips into town for supplies, have revealed the tension between isolation and connection. In the past, such struggles have been highlighted by major infrastructure proposals, such as damming major Patagonian rivers to provide electricity for northern populations. Each week, students conversed vigorously about the historical changes to the regions’ peoples and landscapes.

While the trip was not realized, and therefore on-the-ground experience and first-hand accounts proved impossible, the students nevertheless worked hard to illuminate various aspects of Patagonia. Please explore and enjoy the twelve essay projects provided here, and challenge your own preconceptions of this landscape of the imagination.