‘Kantina’ culture: A friendly place in an unfriendly world

July 11, 2017 / Joe Stephens / Comments Off on ‘Kantina’ culture: A friendly place in an unfriendly world

MORIA, Greece — When refugees came to the Greek island of Lesbos, Katerina Kechagia set up shop.

In October 2015, as thousands of migrants from Turkey landed on the shores of the island, Kechagia pulled her canteen trailer to the center of the action. A sort of café, snack bar and convenience shop all rolled into one and set on wheels, Greek “kantinas” traditionally catered to tourists on beaches. But as tourism dried up in the face of the refugee crisis, Kechagia and others began serving migrants instead.

Parked barely outside the coiled razor wire marking the boundaries of the Moria refugee camp, Kechagia sold food, coffee and tobacco to refugees and aid workers.

“We decide to come here because we knew that we would have work all over the year,” instead of just the summer months, Kechagia said.

Alongside Kechagia’s shop, other vendors clustered around the entrance to the camp, where residents have complained about overcrowding and generally degrading conditions.

Last year, two people died after a fire broke out. In January, three people died during a cold snap. This week, tensions boiled over as residents of the camp rioted and burned a number of structures to the ground.

Dissatisfied with the food inside Moria, many of the camp’s residents began to buy meals from the entrepreneurs outside the gate. “Our specialty,” Kechagia said, “is salad kebab and chicken with spaghetti.”

Migrants seated at some of the dozens of plastic tables that surround Kechagia’s shop said they go to her for more than food.

Obama Nema, an Iraqi man in his late 20s, batted away flies as he cooled off under a wide tent. 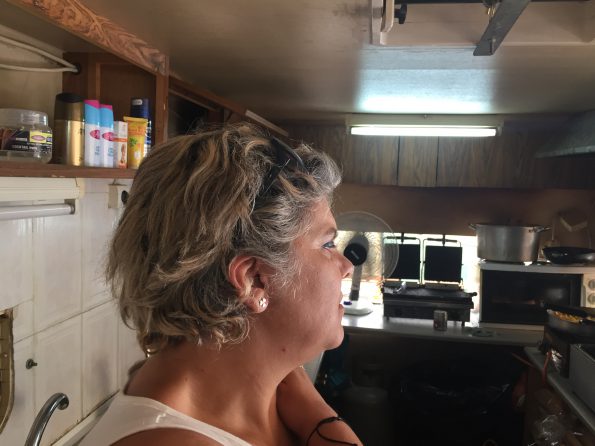 Kechagia has catered to refugees for nearly two years. Photo by Jack Lohmann

Nema acknowledged that he also frequented Kechagia’s kantina for food and soft drinks. As he spoke, a friend heckled him jokingly. “President of United States,” the young man called out.

In the kitchen, Kechagia stood laughing with Karwan, a refugee from the Kurdistan region of Iraq.

Ringed by concrete walls topped by chain-link fencing and barbed wire, Moria was constructed at the site of an old military base. This time last year, migrants arriving at the camp were required to remain inside what had effectively become a detention facility. But in response to protests and changing political circumstances, authorities now allow migrants to come and go. In recent months, many have taken the bus nearby to Mytilene, a beachside town that became ground zero for the refugee crisis.

“In the morning, they wait for the bus,” Kechagia said. “They come to tell me good morning.” The visits are social. “They don’t buy something. They only come to say hello.”

Nema said he has talked to Kechagia about his frustrations with camp life, and “everything, what maybe I want to do after” leaving.

“Whatever they have in their minds, they tell me,” Kechagia said. Her new friends have confided in her “for everything, for their families in their countries, for their problems.”

Some migrants at Moria have been there more than a year, meaning that daily visits to the kantina have led to lasting friendships.

“All the customers here are regular. Most of them I know with their names,” she said. “After so many months, we are friends.” 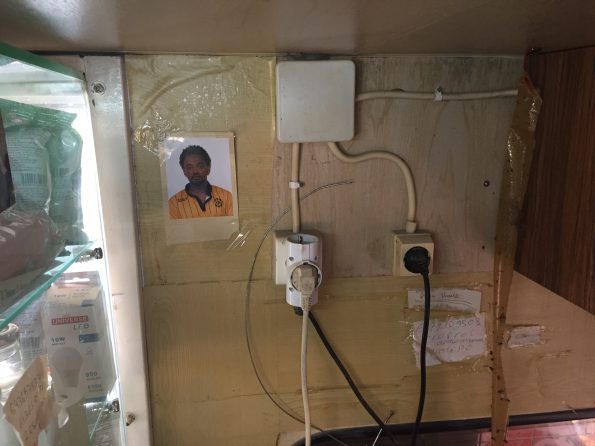 Kechagia hung a photo of Michael, a migrant from Eritrea, on the wall of her kantina. Photo by Jack Lohmann

Above the cash register, a small photo was pinned to the wall—a portrait of a man wearing a yellow jersey. He was from Eritrea, Kechagia said. His name was Michael. “And I call him, like here in Greece, Mixalaki.”

“And now, over at the camp, they call him Mixalaki, like me.”

In late May 2017, Michael left Moria. After many months of waiting, he had received his registration papers. He transferred to a camp in Thessaloniki, a city several hundred miles away in northern Greece. Even so, Michael managed to come back and visit Kechagia. This week, he was staying for three days.

“From Thessaloniki to Athens with a train, and then with a ship,” Kechagia said. “Now he’s sleeping. I think at about one o’clock he will be here. He will come, we drink coffee, we make fun.”

They had a lot of catching up to do—about “his brother, his mother, what he wants to do.”

Kechagia said Michael’s goal was to move to Norway to be with his aunt. Then, he wanted to start a family of his own. His dream, as she put it, was straightforward: “I want a house with all my family.”

But as Michael and thousands of others have bided their time in Greece, those plans remained on hold. Over time, they congregated in spots like Kechagia’s kantina. 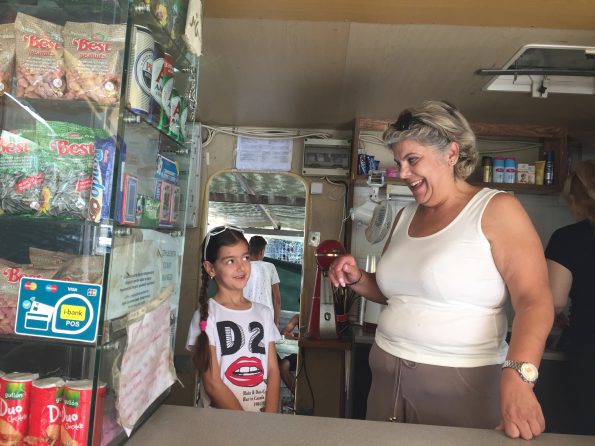 On a recent afternoon, Azin, a young girl from Iraq who identified herself only by her first name, joined Kechagia inside the kantina with her older brother, Mostafa.

“Do you want to drink a cold chocolate?” Kechagia asked Azin, hugging the girl.

Azin, of course, wanted a cold chocolate. Azin hopped around excitedly as Kechagia poured the drink.

“I love them,” she said of the migrants who visit her shop. “Really, I love them.”