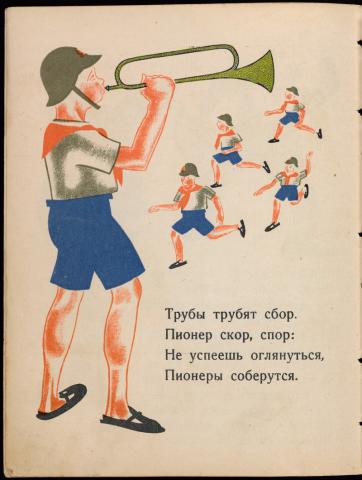 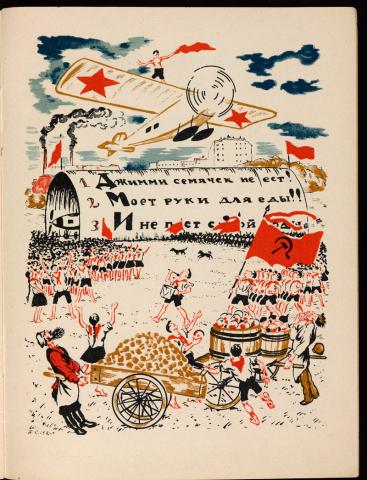 What is “Playing Soviet?” This interactive database of children’s book illustrations draws the little-known and rarely-seen Soviet children’s books from the Cotsen Collection at Princeton’s Firestone Library. The featured illustrations have been selected and annotated by a diverse group of scholars and students of Russian and Soviet culture. The site’s customizable data visualizations, still under construction, will map relationships among artists, image types, color, style, and publication information.

Why study Soviet children’s books?  In the selections featured here, the user can see first-hand the mediation of Russia’s accelerated violent political, social and cultural evolution from 1917 to 1953.  These conditions saw the proliferation of new styles and techniques in all the graphic arts: the diverse productivity of the Russian avant-garde, photomontage, experimental typography, and socialist realism. As was clear both from the rhetoric of the arbiters of Soviet culture – its writers and government officials – the illustration and look of Soviet children’s books was of tantamount importance as a vehicle for practical and concrete information in the new Soviet regime. Directives for a new kind of children’s literature were founded on the assumption that the “language of images” was immediately comprehensible to the mass reader, far more so than the typed word. Illustrators were raised as equals to the revered Russian author, bringing artists such as Alexander Deineka, El Lissitzky, Vladimir Lebedev, and numerous other graphic designers to the pages of children’s books to create imaginative models for Soviet youth in the new languages of Soviet modernism.

How did these books get to Princeton? The books housed at the Cotsen Children’s Library at Princeton University were the gift of Lloyd E. Cotsen, class of 1950 of Princeton University. Mr. Cotsen began collecting children’s books in the mid-1960s with the goal of creating a research collection of materials for children: books, manuscripts, original artwork, prints, educational playing cards and paper toys. He gifted the collection to Princeton between 1994 and 2006. In the years following, Andrea Immel, his private librarian and now the curator of the Cotsen Children’s Library, has continued to build on the collection’s strengths, increasing the number of Soviet children’s books from around 1500 to 2500.

The site is built on a Drupal platform. While the site is only in its initial phase, its image database will grow every year by roughly 100 images.

This site has been made possible by a seed grant from the Center for Digital Humanities, Cotsen Children’s Library, the Department of Slavic Languages and Literatures, and the support of Ben Johnston at the McGraw Center for Teaching and Learning at Princeton University.

© 2020 The Trustees of Princeton University.