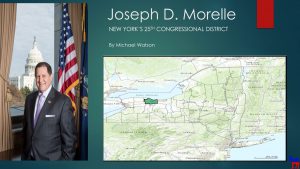 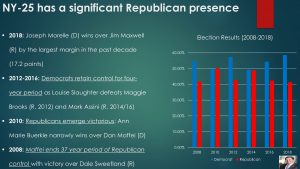 Slide 1: Joseph D. Morelle (Democrat) serves as the U.S. Representative for New York’s 25th congressional district. This region is highly interesting in that it underwent a turnover from being consistently Republican within the past two decades. Morelle is the latest Democratic representative and his 17.2 point victory demonstrates the decreasing popularity of the Republican party with constituents. That aside, elections are typically close in NY-25 given the strong presence of both parties. 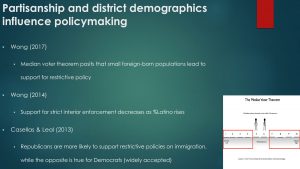 Slide 2: The literature provides insights into predicting voting behavior on the issue of immigration. Wong (2017) discusses median voter theorem, which posits that small foreign-born populations are correlated with increased support for restrictive policies on immigration. Furthermore, Wong (2014) contends that support for strict interior enforcement decreases as the Latino population rises. Casella & Leals (2013) support the notion that Republicans are more likely to support restriction. It is important to note that the aforementioned principle is widely held and not unique to Casella & Leals. 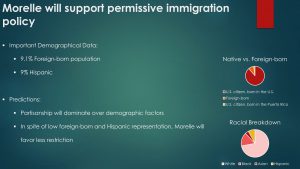 Slide 3: Based on these research findings, it is predicted that Joseph Morelle (D.) will support permissive immigration policies. Although the foreign-born and Hispanic populations are low, partisanship is expected to be the most influential factor. As a Democrat, it is likely that Morelle will take a pro-immigration posture. Given the conflict in the predicted outcome between these factors of demographics and party, will Morelle’s political expressions on immigration seem suppressed? 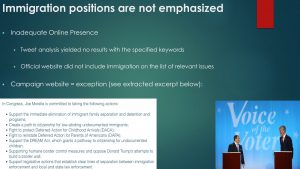 Slide 4: After investigating Morelle’s online platforms, it is clear that his positions on immigration are not particularly important to his political agenda. Tweet analysis yielded no results with the specified keywords (“immigration, ” “immigrant,” etc.) and his official congressional website did not include immigration on the list of relevant issues. The campaign website was found to be the exception to this: Morelle claims to be committed to “support[ing] the Dream Act… [and] fight[ing] to protect Deferred Action for Childhood Arrivals.” Despite this, Morelle only has a single key vote on immigration bills (votesmart.org): to co-sponsor the New York DREAM Fund commission.