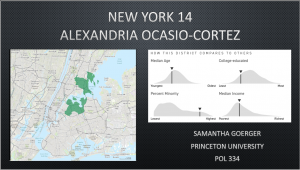 New York 14 is situated in the upper Bronx and northwestern Queens of New York City.  It is currently represented by Alexandria Ocasio-Cortez. 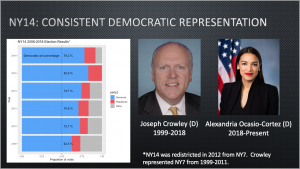 NY14 has had consistent Democratic representation for at least two decades.  Joseph Crowley represented the area from 1999-2018, with a redistricting in 2012 from NY7.  Alexandria Ocasio-Cortez (AOC) unseated the incumbent Democrat in the 2018 New York primary election and proceeded to win the house seat with 78.2% of the vote.  She ran as a Democratic-Socialist with progressive policies aimed at mobilizing the minority constituents.  As depicted in the left-hand graph, it was not uncommon for Democrats to win over 70% of the vote in NY14, situating it as an unquestionably Democratic district. 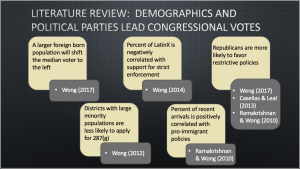 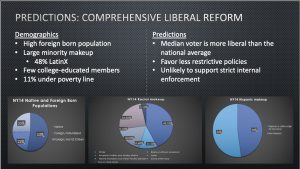 NY14 is highly diverse with native born constituents comprising only 53% of the population. 57% of constituents self-identify as non-white, with 48% identifying as Hispanic or LatinX of any race.  As seen in the introduction slide, the average adult education level trails the national average, with few having obtained a Bachelor’s degree or higher.  According to the US Census Bureau, 11% of the population falls under the poverty line. Given the aforementioned literature on local demographics, the median voter in NY14 is expected to be more liberal than the general public.  The district representatives are, therefore, expected to favor less restrictive policies and not support strict internal enforcement. 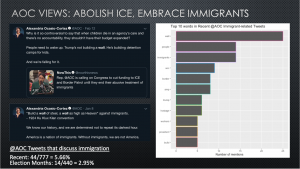 Because AOC has only been in office for three months, it is difficult to analyze her policy preferences directly through voting records.  In fact, vote tracking websites do not list any votes pertaining to immigration except to overturn the recent national emergency declaration.  Because of this increased difficulty, I relied on AOC’s campaign website and Twitter feed.  When discussing the issue on social media, she is vehemently against ICE and immigration enforcement, often invoking intense language such as “hostage” to describe President Trump’s intention to build a wall and detain families.  That said, immigration is not a central focus of her campaign.  Immigration is listed as the seventh key issue of fifteen on her website.  Additionally, only 5.66% of recent Tweets and 2.95% of election month Tweets reference immigration.  Conducting a basic analysis of words used in her Twitter feed, I found that most prominent issues mentioned were taxation and climate change.  Therefore, while AOC is passionate about pro-immigration policies as predicted by the aforementioned literature, it falls short of the most important issue in her platform.