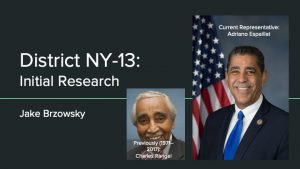 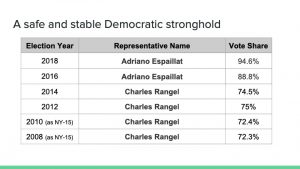 New York’s Thirteenth Congressional District has for decades been one of the most stable and solidly Democratic seats in the country. Though referred to by different numbers over the years, the district, comprised primarily of Manhattan’s Harlem neighborhood, has been represented by only three individuals since 1945: Adam Clayton Powell Jr., Charlie Rangel, and now Adriano Espaillat. (I consider NY-15 to be the immediate predecessor of NY-13 prior to the 2011 redistricting, as 80% of the new 13th district was previously in the area of the 15th.) Espaillat was elected following Rangel’s retirement from Congress in 2016 and cemented his hold on the district in the 2018 elections with nearly 95% of the vote. The strong Democratic character of the district and its remarkable stability will prove relevant in our analysis. 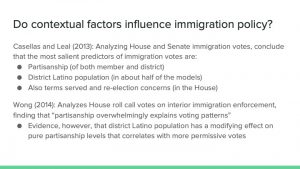 Recent scholarship has repeatedly examined the district-level characteristics that may predict a member of Congress’s votes on immigration. I focus here on two articles that prove especially relevant regarding our district, that of Tom Wong (2014) as well as Jason Casellas and David Leal (2013). From regression analysis of past votes, both show partisanship and district Hispanic population to be among of the most consistently associated variables with immigration legislation. Both agree that partisanship (i.e. the partisanship of the representative, but to a lesser extent the partisanship of the district as well) is the primary factor underlying the MC’s voting record. However, both similarly note an influence of the district Latino population in which greater numbers associate with support for more permissive policies toward immigrants. Given the presence of both partisanship and significant Latino population in our district, we expect both of these articles to be relevant to our analysis as well. 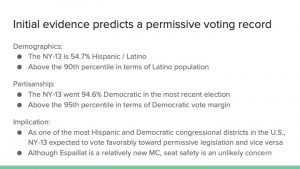 If partisanship is the biggest predictor of immigration policymaking, it would be no surprise that Espaillat would support permissive immigration legislation. In addition to his own partisan ideology (at the 89th percentile among Democrats alone, according to Govtrack) NY-13 had one of the highest partisan margins in the country in the 2018 election, coming in above the 95th percentile. Furthermore, the district’s Hispanic population is also among the highest in the nation, at approximately 55 percent. This particular pairing of factors amounts to a strong indicator that Espaillat will be a supporter of permissive immigration legislation, if the models of Wong (2014) and Casellas and Leal (2013) hold true. The following slide examines the empirical data to support this premise. 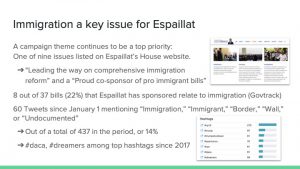 Since his campaign for the House, Espaillat has been outspoken on the topic of immigration. In his campaign platform, he stressed his Dominican heritage in influencing his thoughts on the topic. Today, immigration continues to be a central part of Espaillat’s agenda, as one of nine priorities listed on his House website. There he lists actions that he has taken on the issue of immigration, including seven immigration-related bills that he co-sponsored. These and one other reflect more than twenty percent of the bills that Espaillat has sponsored while in Congress. The congressman’s focus on immigration is shared by his Twitter page, on which approximately 14 percent of his tweets since the start of the year have had some focus on immigration-related matters. Between his actions and his rhetoric, it is clear that the issue of immigration will continue to occupy an important place within Espaillat’s agenda, alongside his concerns for his home district.