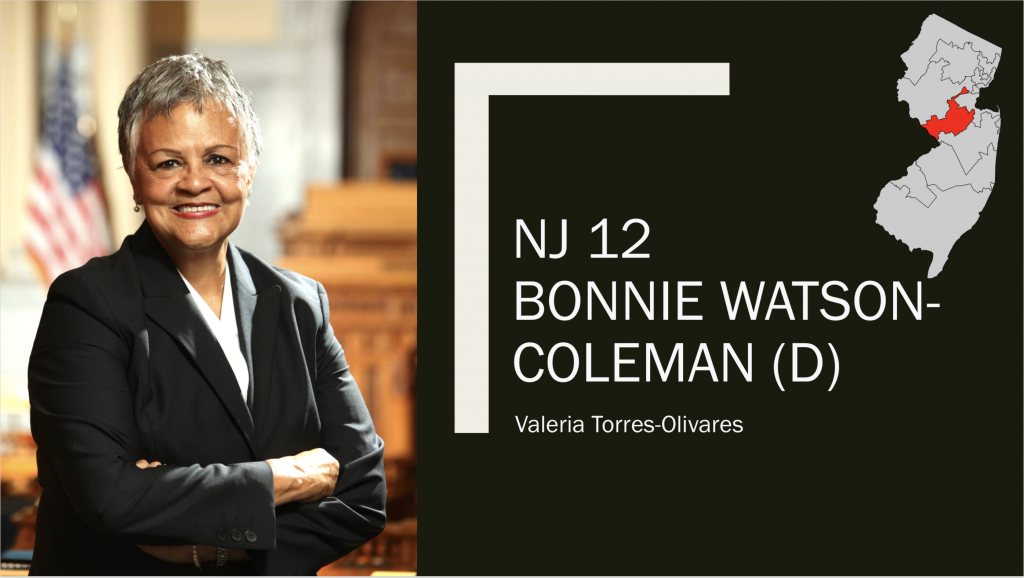 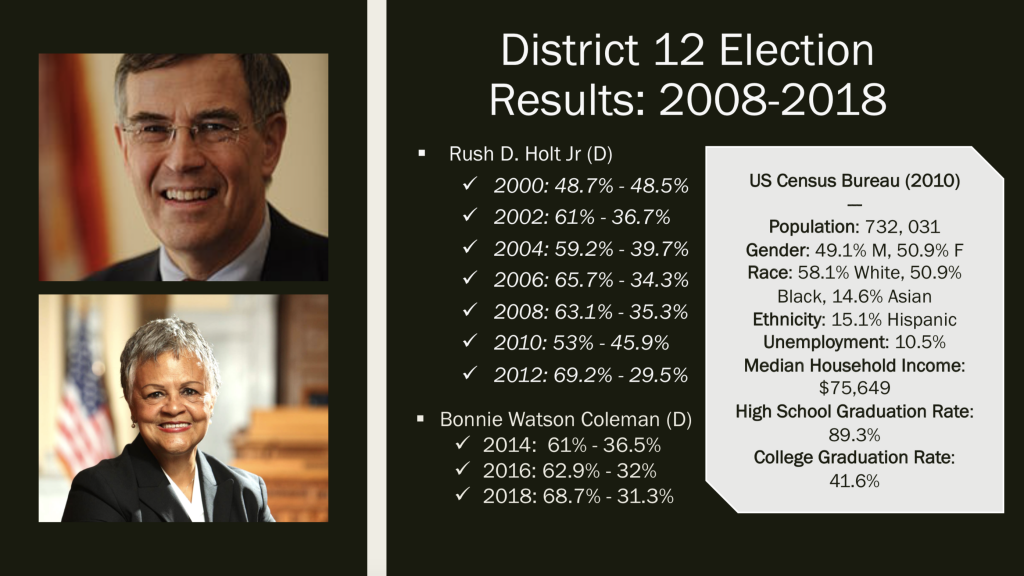 Slide 1 shows how there has been a strong Democratic presence in NJ 12 for a number of years. For the history of the district, there has always been a Democratic Representative in office, starting out with Rush D. Holt Jr, serving from 2000 to 2014. He was then succeeded by the current Rep, Bonnie Watson Coleman, who has served from 2014 until now. As you can see, on the right-hand side there is data from the US Census Bureau (2010) that details population, gender, race, ethnicity, unemployment, median household income, high school graduation rate, and college graduation rate. 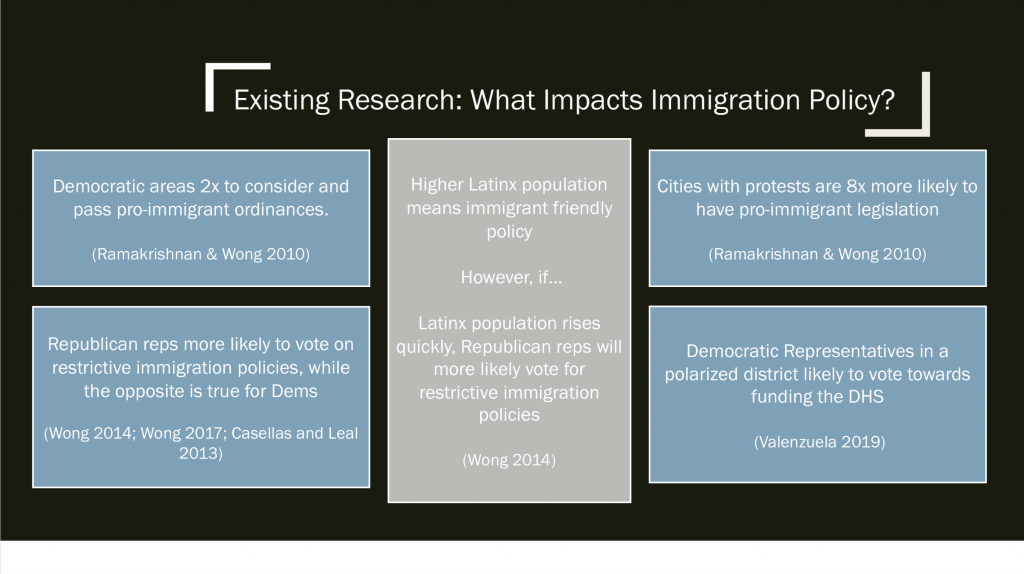 On this slide you can find existing research on what impacts immigration policy. This is used on this slide to make predictions on what the current Rep, Bonnie Watson Coleman (BWC), will decide upon, whether that be a restrictive or accepting immigration policy. According to the research and readings that were given to us in the class, the higher the population of Latinx residents, the more likely that there will be a immigrant friendly policy; however, if the Latinx population rises quickly in a short amount of time, then Republican Reps will be more likely to vote for restrictive immigration policies (Wong 2014). According to Ramakrishnan and Wong (2010), cities with protests are eight times more likely to have pro-immigrant legislation. When looking at who is likely to fund the DHS, Democratic Representatives in a polarized district likely to vote towards funding the DHS (Valenzuela 2019). It also happens to be a well-known fact that Republican Reps are more likely to vote on restrictive immigration policies, while the opposite is true for Democrats (Wong 2014, Wong 2017, Casellas and Leal 2013). 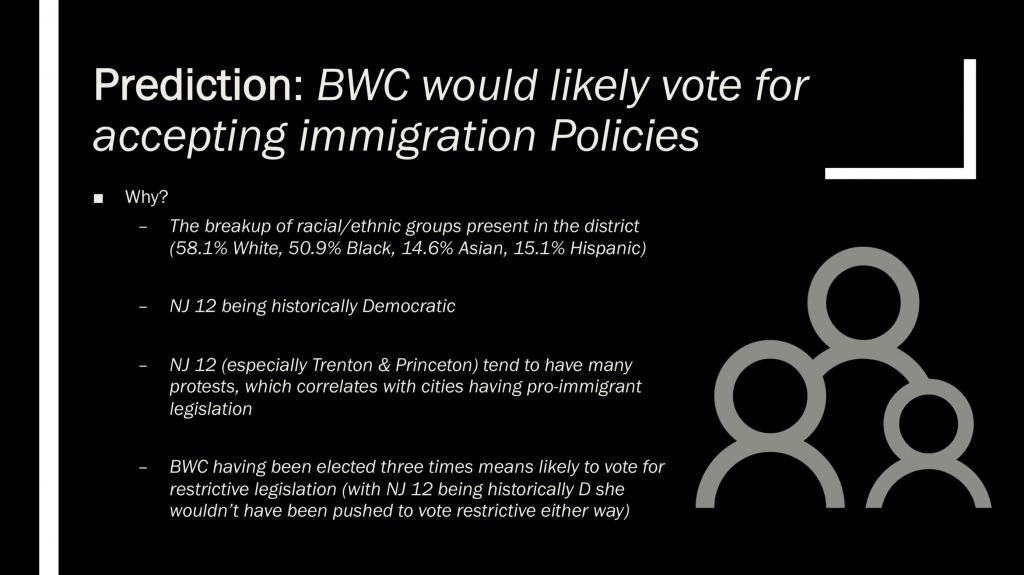 According to all of the research presented on the previous slide, if BWC had to choose between a restrictive or accepting immigration policy, she would probably go with an accepting policy. When looking at protests, there are many protests within cities of District 12, particularly in Trenton and Princeton, indicating that the district would have an accepting policy on immigration. Another reason to believe that BWC would be for accepting immigrant policies is the fact that BWC is not a Representative in a polarized district, in addition to this, she is also serving in a district that happens to be historically Democratic. Since BWC is serving her third term as a Representative of District 12, she would likely not be pushed towards a restrictive policy since she has no history of doing so in the past. 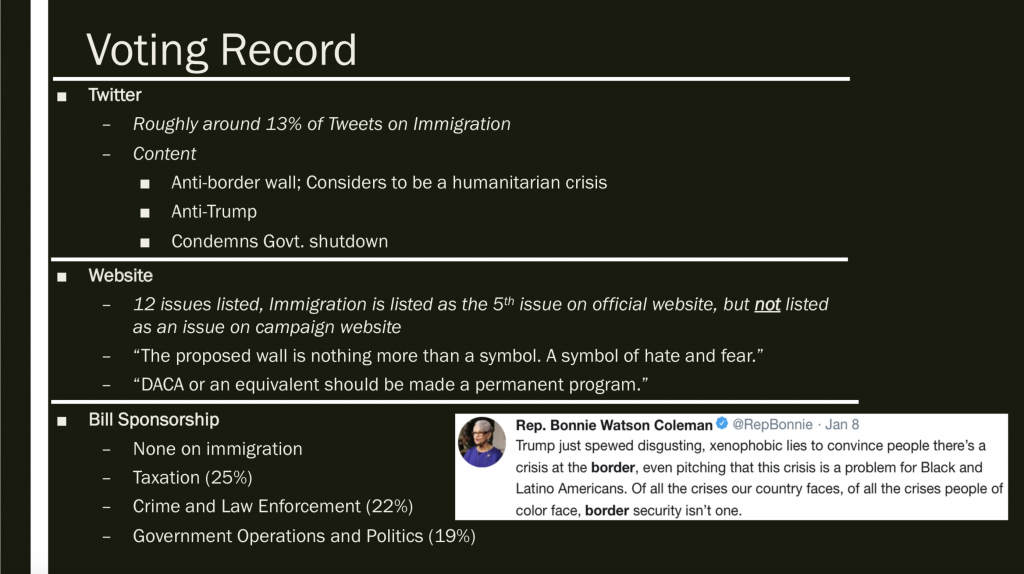 When looking at BWC’s tweets containing the keywords: “Immigration,” “Immigrant,” “Border,” “Wall,” and “Undocumented,” you find that roughly around 13% of her tweets are on immigration from January 1st, to March 1stof this year. While she does have several tweets on the topic of immigration, this doesn’t translate to her voting record. From what I found, the hasn’t ever sponsored a bill on immigration; however, this does not necessarily mean she has voted against one, it is just likely that due to NJ’s distance from the border, there has been no need to pass a bill on immigration. Aside from this, her tweets do indicate that she hastaken a public stance on being against the wall since she considers the border situation to be a humanitarian crisis, anti-trump, condemns the govt. shutdown, and is for DACA. When looking at her history of bill sponsorship, she has mostly sponsored bills revolving taxation (25%), Crime and Law Enforcement (22%), and Government Operations and Politics (19%). If one looks on her website, one can find that out of twelve issues listed, immigration is listed as the 5thissue; however, when looking at her campaign website, one wont find Immigration listed as an important issue for her. On her official website, one can find quotes from her about how she believes in how DACA or an equivalent should be made permanent, and how the proposed wall is nothing more than a symbol of hate that she is against for many reasons.