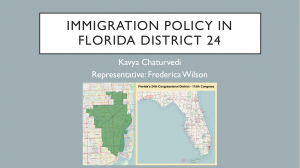 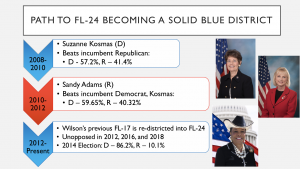 Since 2008, FL-24 has changed for a toss-up of a district to a solidly democratic district with the same representative for the past seven years. From 2008-2010, Suzanne Kosmas, a democrat served in Congress after the defeating the incumbent Republican representative, Tom Feeney. She won this election by a margin of 15.8%, after capturing 57.2%, compared to her opponent’s 41.4%. However, in the very next election the district flipped parties. Sandy Adams, a Republican, defeated Kosmas, the incumbent Democrat, by obtaining 59.65% of the vote while Kosmas obtained only 40.32%. The makeup of the district changed significantly when the area was redistricted. What was previously FL-17, a heavily Democratic district, was mostly redistricted into FL-24, changing the demographics of the district greatly. Frederica Wilson, the incumbent representative of FL-17 ran unopposed in the 2012 election. After being contested in the 2014 election and winning by a margin of 76.1%, it became clear that the makeup of the district had changed significantly in favor of the Democrats. Wilson ran unopposed in the 2016 and 2018 election and now remains the incumbent representative. 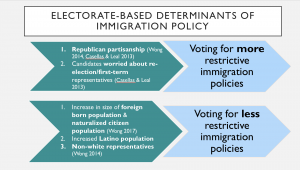 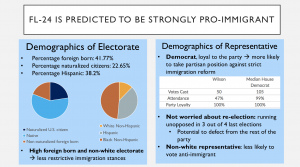 Most characteristics of FL-24 point to the district being strongly pro-immigrant. First, for the demographics of the electorate, 41.77% of the population is foreign born and 22.65% are naturalized citizens. This relatively high foreign-born population suggests less restrictive immigration stance. However, because the foreign-born population does not include that high of a percentage of naturalized citizens, immigration decisions may be more balanced. In addition, there is a relatively high Hispanic/Latino population, and an even higher black population. Because there is a minority white population in the district and a higher percentage of Latinos, there is a lower probability of Rep. Wilson voting for strict immigration enforcement. Second, for the representative, she is a Democrat who is known to be loyal to her party in voting behavior, suggesting that she will remain partisan and vote against strict immigration measures with other Democrats. However, she is extremely unconcerned with re-election, as she has been running unopposed in 3 out of last 4 elections. According to Casellas & Leal’s theory, this means she may be more emboldened to defect from the rest of the party on certain votes. Lastly, she is a non-white representative, which also suggests she is less likely to vote for restrictive immigration measures. 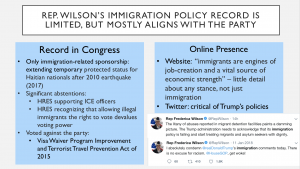 Representative Wilson is not very involved in the immigration issue in general. The only immigration related bill sponsorship of her career was to extend temporary protected status for Haitian nationals after 2010 earthquake, which is a topic that is directly related to her district, as there are many Haitian immigrants in South Florida. Her website has only a few sentences about immigration without going into any specific policy details (however this is true for all issues on her website), and her tweets on the subject of immigration are mostly recent, criticizing decisions of President Trump. However, interestingly, she has abstained in many seemingly non-controversial votes or even voted against the party on the Visa Waiver Program Improvement and Terrorist Travel Prevention Act of 2015, a bill that would terminate visas for citizens of Visa Waiver Program countries who are dual nationals of Iran, Syria, Iran, or Sudan. In keeping with the theory from Casellas & Leal, because Rep. Wilson is under no electoral threat, it makes sense that she sometimes differs from the rest of her party on some issues.