This week we have studied the mobilization of the Latino community and the degree to which they can influence elections and in what circumstances that influence occurs. The anti-immigrant rhetoric that is being used to mobilize white, right-wing voters might actually have the opposite effect than intended an in fact lead to a surge of Latinx voting. Heightened anti-immigrant contexts can lead to increased political engagement of immigrants. Empirically, Berreto identifies the anti-immigrant policies used in California as explaining the switch of the state from a Republican to a democratic stronghold. As Latinos became increasingly frustrated with the anti-immigrant politics of California’s GOP, such as Prop 187, they mobilized and increasingly began to vote for democrats. White (2016) finds this trend more broadly, establishing that in communities where there is increased immigration enforcement and  implementation of security policies, there is an increase in the political engagement and activism of the Latinx community in response.

In light of the policies of the Trump administration, this could have the implication of increased voter turnout in the Latinx community in ways that will change the American electorate and the outcomes of future elections. The article I have picked discusses how there has been a surge in Latinx votes in the 2018 midterm elections, that was greater than the increase in outcomes of other groups. Given the strong anti-immigrant context and the salience of the issue, this could possibly explain the increase in the Latinx share of the vote and mobilization, especially given that 70% of Latinos feel that Trump has spoken in a way that find personally offensive. However, this shift may not necessarily have the impact that we anticipate. First, the primary voting issue identified is not immigration, so they might be driven to vote by other issues, in which they may not align against the party that is pursuing more anti-immigrant policies. Second, Latinos who do not already strongly identify with the group, might not be mobilized to vote in the same way or become engaged in opposition movements as explained in the Perez reading (2014). This leads me to two questions:

Racism, not a lack of assimilation, is the real problem facing Latinos in America: Hungtingon’s down-stream effect

This week, we saw Huntington’s claim in The Hispanic Challenge that the greatest cleavage in American society in the 2000s would be an Anglo-Hispanic one, overtaking the  perceived differences between White and Black Americans. He advocates that several key concepts, including contiguity, scale, illegality, regional concentration, and historical presence can account for this growing divide; he famously claimed that

“These differences combine to make the assimilation of Mexicans into U.S. culture and society much more difficult than it was for previous immigrants. Particularly striking in contrast to previous immigrants is the failure of third- and fourth-generation people of Mexican origin to approximate U.S. norms in education, economic status, and intermarriage rates.” (Huntington, 36).

In Citrin, et. al.’s article, we see in fact that many of these dimensions along which Huntington asserts will be the source of racial cleavages are in fact ones along which Mexican immigrants and 2nd and 3rd-generation descendants tend to assimilate at the same rates as other immigrant populations. In  the following NBC News article, Suzanne Gamboa outlines an argument that it is racism, and not a lack of assimilation is a more pressing problem for Latinos in America. Despite clear (statistical) evidence to the contrary, why is the narrative posed by Huntington still active in current discourse?

Abrajano and Hajnal’s work opens with the idea of the racial threat theory, which is that “individuals in contexts with larger minority populations should feel more threatened, express greater animosity, and be especially supportive of a host of policies aimed at maintaining the in-group’s social, political, and economic privileges” (117) They modify this theory, however, by arguing that whites view large Asian populations as positive while viewing similarly large Latinx populations as threatening. Thus, the racial threat theory applies particularly to Latinx populations.

Tavernise’s New York Times article, on the other hand, lends support to the original racial threat theory, in the midst of a discussion between demographers on the accuracy, ethics, and consequences of publishing data that shows that whites will soon be a racial minority in America. It suggests that when whites are confronted with the idea of losing their status as a majority group, they are more likely to support restrictive immigration and “report negative feelings toward racial minorities” as a whole. The article thus seems to support the idea of the racial threat theory applying to racial minorities across the board. Tavernise closes by suggesting that though political actors seem unwilling to promote them, possible solutions to white backlash lie in emphasizing the good of immigration or suggesting to white Americans that they will still be the dominant racial group due to shifting racial boundaries.

A ‘Mainstreaming Of Bigotry’ As White Extremism Reveals Its Global Reach

Marisa Abrajano and Zoltan L. Hajnal, in their work “White Backlash: Immigration, Race, and American Politics”, analyze white Americans and their party identifications and voting decisions and through this, propose a question: what are the consequences of immigration for white Americans political attitude? Abrajano and Hajnal identify a contradiction in that there is a movement towards greater equality and acceptance of racial, ethnic, and religious differences, yet there are also heightened ethnic divisions and tensions due to immigration (e.g. rise in hate speech and crime against immigrants). Ultimately, the pair conclude that white backlash leads to greater white support for the Republican Party, which tends to advocate for restrictive immigration policy.

The article below outlines details of the recent shooting in New Zealand. In particular, it focuses on white-supremacists and identifies the shooter as one who targeted his attacks towards immigrants. This event is an example of a consequence of what Abrajano and Hajnal describe as “white backlash,” and President Trump’s lack of attention to the rise of right-wing supremacy only serves to fuel these actions as he continues to call immigration an “invasion at the US-Mexico border.”

Abrajano and Hajnal find that immigration affects the partisanship of white Americans, and suggest that white backlash probably played a role in the “massive white Democratic defection” that has happened in the last few decades. They look at several factors that might have led to this backlash, and also touch upon how nativism has been influenced by immigration.

This article looks at Trump’s implicit advocacy for nativism and white nationalism. It focuses particularly on Trump’s comments on immigration in Europe: he advocates that Europe should not continue taking a large number of immigrants/refugees. Trump’s use of language in addressing this issue (i.e. bringing up ideas of Europe’s “culture”) is particularly interesting, as it is similar to white nationalist and nativist rhetoric.

Local immigrant advocacy groups are often some of the most important bridges immigrants have with integrating into local US society. As the article shows, these groups are often underfunded and thus limited in their powers. Advocacy groups are asking to increase the Immigrant Justice Legal Services (IJLS) grant in Washington DC, which would result in legal groups being able to respond to a much larger number of requests. 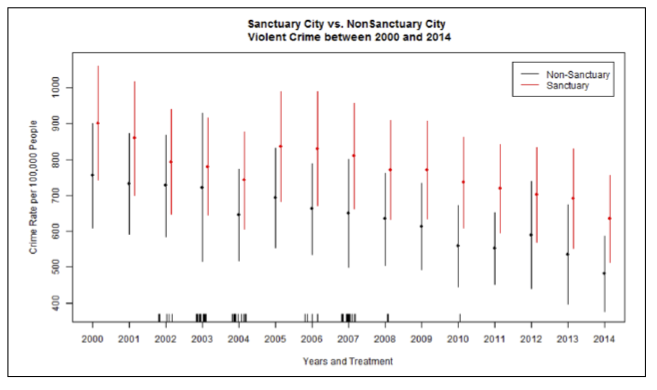 Interpreting data with caution: don’t do a Sessions!

I find the implications and unintended consequences of immigration policy fascinating, especially at the state and local levels which are more likely to deal with the nuances of how policies exist in practice. California’s AB 50 from 2013 allowed undocumented immigrants to apply for driver’s licenses in an attempt to improve road safety. AB 50 is not necessarily a piece of immigration legislation itself; however, the population it affects are immigrants.  The unintended consequence of AB 50 is that ICE and similar entities can obtain the information — photos, address, etc — from people who have since applied for driver’s licenses. This article features the stories of several undocumented immigrants who applied for licenses under AB 50 and were tracked down by local ICE agents using the information given to the DMV , even though they broke no laws and had established lives and families here.