This article discusses how the number of Latino voters reached 11.7 million in 2018, nearly doubling the 6.8 million that came out in 2014. In addition, new data reveals this was the second-highest Latino voter turnout ever. The only year that surpassed this statistic was the 2016 Presidential Election. Considering it was only a midterm election in 2018, the article states how the dramatic increase in Latino voters can be attributed to immigration becoming a larger issue in recent years. As a result, Latinos are clearly more inclined to vote. Furthermore, the article adds another interesting statistic: Hispanics were the most likely to cast their vote early than any other group. The issue of immigration is certainly having an impact on Latino voter turnout.

The stigma towards Hispanic assimilation

In this article, it discusses the remarks made by Tom Brokaw, a former anchor for NBC Nightly News, towards Hispanics and assimilation. Brokaw made an appearance on NBC’s “Meet the Press”  in January and while discussing Trump and the border wall said that Hispanics need to work harder towards assimilating in the U.S. . Brokaw received heavy backlash from many but also some support from conservatives towards his comment. Brokaw apologized multiple times for his comments. Evidenced in some of the readings this week and discussed in the article, Hispanics and Latinos have been continuing to grow in English proficiency and have been assimilating at the same rate as any other immigrant community has in the past. However, many Americans still look down on the Hispanic community and have ideas that Hispanics do not/do not want to assimilate into U.S. culture or society, as claimed in the Huntington reading and arguments.

According to different sources we’ve read this week, the mass media’s effect on people’s interpretation of the immigration crisis is powerful. Most media companies frame immigrants, especially Latino immigrants, in a negative or neutral light. There is some variation though, such as whether the news are delivered in a Spanish or English program, or the state’s proximity to the border.  Regardless, Latino immigrants rarely have a positive portrayal in the media.

This week’s article argues much of the same, providing evidence that immigrants are contributing members of society. It argues that most immigrants, especially Latinos, are framed negatively. However, this argument brings to light a crying immigrant girl next to her mom, an image that perturbed Trump himself.

Question: Would a more positive immigrant framing from the media possible influence voters enough to pressure the government to shift its current immigration strategy?

Special Report: How Republicans are using immigration to scare voters to the polls

Chapter 4 of White Backlash discusses how a “Latino threat hypothesis” has led white voters to supporting restrictive immigration policies due to fears of economic/political competition, crime, and social services being drained . The author notes this threat hypothesis is most prevalent in states with a high Latino population (Abrajano & Hajnal, 2015).

My article centers on the mobilization of immigration as a prevalent issue by the Republican Party during the 2018 midterms in two states where a Democratic senator was running for reelection in a state won by President Trump: Indiana and Montana. The immigrant threat narrative was present in more GOP advertisements than at any other time in recent political history. Interestingly, however, both of these states have a high white population but a low Latino population, which puts this advertising strategy in contrast with what the “Latino threat hypothesis” would suggest (states with a high Latino population would spark larger resentment).

My discussion question: Is there a factor other than Latino population that could be causing the backlash Abrajano and Hajnal note?

The Issue Most Republicans Care About: Illegal Immigration

In Chapters 2 and 3 of White Backlash, Abrajano and Hajnal explain how white Americans’ political leanings influence their views on immigrants, which in turn shape their voting policies. Their conclusions on partisanship and immigration mirror findings previously discussed in class, since they concluded that white Americans who favored immigrants are more likely to be Democratic and pick liberal policies. They also find a significant link between negative immigration attitudes and Republican partisanship even when controlling for opinions on other social issues and racial groups.

My article discusses the effects of Trump’s portrayal of undocumented immigrants. By framing the debate in a nativist way, he was able to appeal to many voters: in a Pew Research Center poll, 75% of people voted for him based on this issue. Despite findings showing undocumented immigrants are less likely to commit crime and make economic contributions to low-skilled industries, his voters’ attitudes indicate that they view immigrants as a threat to the US. The article also mentions that in light problems like the rising wage gap in the U.S. and the opioid epidemic, Republicans’ concerns with immigration are somewhat unwarranted.

Discussion Question: What could account for immigration’s large influence on partisanship other than politicians’ rhetoric?

College-goers and Early-exiters: Impact of DACA on Higher Education

This week’s readings focus on the issue of immigrant illegality and the liminal lives led by undocumented individuals living in the U.S. They also discuss the consequences of presidential discretion with regards to the Deferred Action for Childhood Arrivals (DACA). In his extensive 12-year study, Gonzales (2015) follows the lives of 150 undocumented youth in Los Angeles as they transition into adulthood. He groups individuals into two groups, college-goers and early exiters, and found the early exiter experience to be characterized by “full-time work in low-wage jobs,” while college-goers embodied strong sense of belonging and optimism, earning them the title of DREAMers (Gonzales, 2015).

This  article from The Atlantic describes the potential effects terminating DACA would have on higher education, an issue that targets the early-exiters and college-goers studied in Gonzales’s case. If DACA beneficiaries lose their work permits, they will no longer be able to legally work in the US. Without a legal income, many of those pursuing higher education will have no way to pay for college. This also makes those who plan on attending a university more reliant on financial aid, which is limited to publicly funded aid as DACA recipients do not have access to federal financial aid.

Discussion Question: What impact would DACA’s end have on the attitudes of early-exiters and college-goers towards pursuing higher education?

Andersen (2008) and de Graauw (2018) both discuss the impacts and influence of interest groups on the civic life of immigrants. In her six-city study, Andersen focuses on the ways in which local organizations help connect immigrant groups to local politics and mobilize their constituents to advance certain issues; furthermore, the voluntary sector often fills in the gaps that political parties no longer choose to do. Similarly, de Graauw analyzes how 501(c)(3) nonprofits are increasingly providing a multitude of social services to immigrants and the political representation and incorporation of immigrants into society. Both authors examine local groups working to advance a pro-immigrant agenda, but there lies an interesting point: who opposes them?

In this article from the Washington Post, Goodman tracks the move from the nativist organization Oregonians for Immigration Reform (OFIR) to overturn a sanctuary policy, and identifies the history of explicit anti-immigrant interest groups, which began through the work of John Tanton. Since the late 70s, Tanton has either created or helped create a number of nativist and extremist organizations who have ties to white-supremacy—including the Federation for American Immigration Reform (FAIR), U.S. English, and the Center for Immigration Studies (CIS)—and has worked at the local and state level to push a racially-charged agenda that appeals to white resentment. Importantly, these groups have now affected efforts for bipartisan compromises on immigration repeatedly. Trump has taken former staffers into positions of power too.

Is it fair for anti-immigrant groups to act deceptively to push their agendas?

Racism or Political Incorporation? What’s behind a lack of Latino political agency? 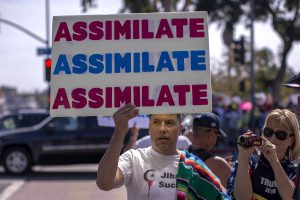 In her article, Suzanne Gamboa advances that racism and not assimilation is the problem plaguing Latinos. Although many levels of the government contest that Latinos have failed to assimilate in America, evidence of Latino socioeconomic mobility debunks this notion. Although many Latinos have family histories that stretch back centuries, many Latinos feel like “foreigners in their own land” as a result of current political dialogue which takes aim at their ethnicity, questions their citizenship status, among others. Moreover, a lack of assimilation is unfairly used to deny political rights to Latinos. In reality, many governments actively work against Latino assimilation through stricter voting laws and electoral redistricting. Gamboa accounts this incredulous irony to inherent racism against Latinos in some physical and ideological pockets of this country. The falsified narrative that Latinos are avoiding assimilation ultimately undermines their ability to contribute to the political narrative of the United States.

The charge that racism is the root problem, not assimilation, is in contrast to Andersen and other readings which maintain that political parties and support organizations are key to incorporation of immigrants into America. Through an analysis of six cities, Andersen forms a thesis around the fact that the lack of immigrant stake in politics is due to being left out by local politicians and not supported by local voting organizations. Failed assimilation into politics is a result of extenuating factors. The contrasting ideas beg the question: What is responsible for a lack of immigrant political agency? Failed political incorporation or racism?

Interpreting data with caution: don’t do a Sessions!

Should the Social Safety Net Be Extended to Unauthorized Immigrants?

Many scholars have noted the increasing shift of immigration policymaking to subnational actors at the state and local level. This research however, has mainly focused on the cooperation of states with the federal government, whether in enacting restrictionist legislation that has stagnated in Congress (Jones-Correa and de Graauw 2013) or in stepping up enforcement by means of the Section 287(g) of the IIRIRA legislation or the subsequent SAFE Act (Wong 2014).  Less focus has been given, however, to the states and municipalities that have resisted the efforts of the federal government in pursuing more permissive policies. Nevertheless, this phenomenon has received much media attention, especially since the election of President Donald Trump along with his administration’s increased efforts at interior enforcement.

This article examines two places that have made efforts to expand the legal benefits and social services available to undocumented immigrants, namely New York City and California. The article questions whether these new policies, that will inevitably cost taxpayer dollars, may actually lead to a backlash among swing voters and spur a new shift toward restrictionism. Salam argues that moderates who were on board with benevolent or even progressive immigration policies may change their minds when they start paying the price to subsidize indolence within the immigrant population. While far from a sure thing, it is worth considering this dimension of immigration politics, in which progressive local governments must carefully walk the line of supporting hardworking and virtuous immigrants without alienating their equally hardworking and deserving native-born constituents.

What responsibility to states and municipalities have toward their unauthorized immigrant populations? How should elected officials balance good intentions with their need to maintain electoral coalitions?