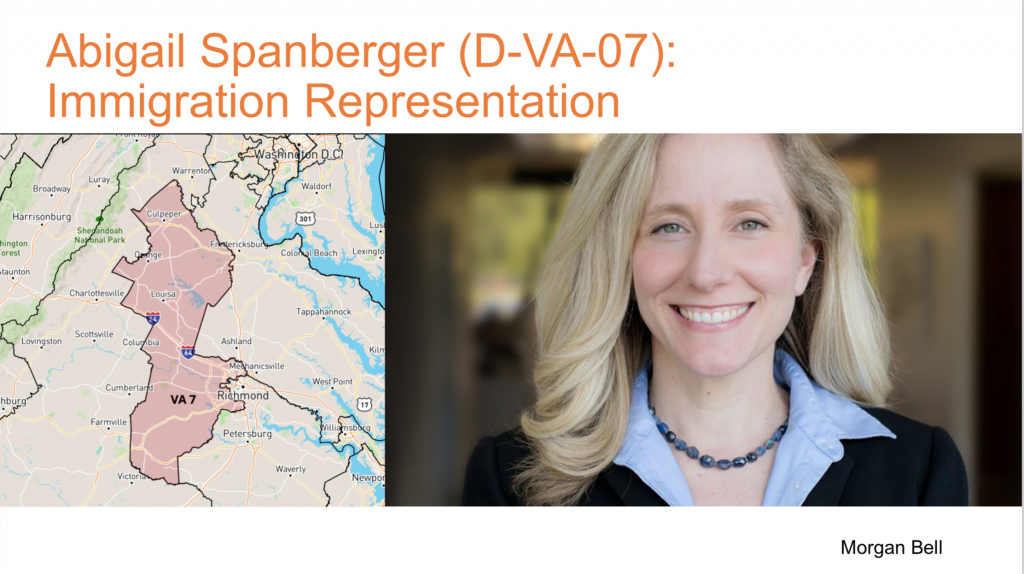 Abigail Spanberger represents Virginia’s seventh congressional district in the U.S. House of Representatives. The district is located in the suburbs of Richmond, VA its representative is a member of the Democratic Party. 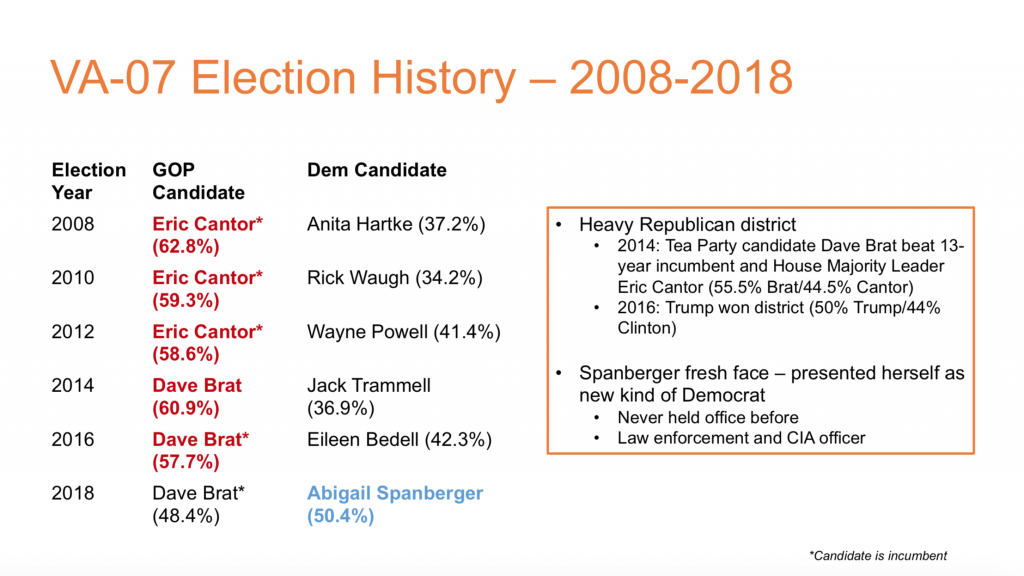 This slide highlights the electoral history of VA-07 over the last decade which is actually quite interesting. The bold red and blue indicates the candidate who won the general election, and the asterisk indicates a candidate is the incumbent. It is clear then that the district is heavily Republican given the decade of Republican congressional representation, however the extent of the district’s Republican lean needs to be noted. In 2014, Rep. Eric Cantor, the House Majority Leader and thereby the #2 Republican in the House of Representatives, was beaten out in the primary election by newcomer Dave Brat. Brat was even more conservative than Cantor, and he came to power as part of the Tea Party wing of the Republican Party. However, after Donald Trump carried the district by 6 percentage points in 2016, a shift seems to have occurred. Democrat Abigail Spanberger claimed victory in the 2018 midterm election for the U.S. House of Representatives by framing herself as a different kind of Democrat. Brat won in 2014 by being an outsider who would create the change the district needed, but after serving his constituents, they deemed him ineffective and instead shifted to the left, choosing newcomer Abigail Spanberger. By framing herself as a different kind of Democrat — one who would work across the aisle to create positive change — she was able to overcome the district’s Republican lean and proved to be what the people of VA-07 were looking for in the 2018 midterm elections. 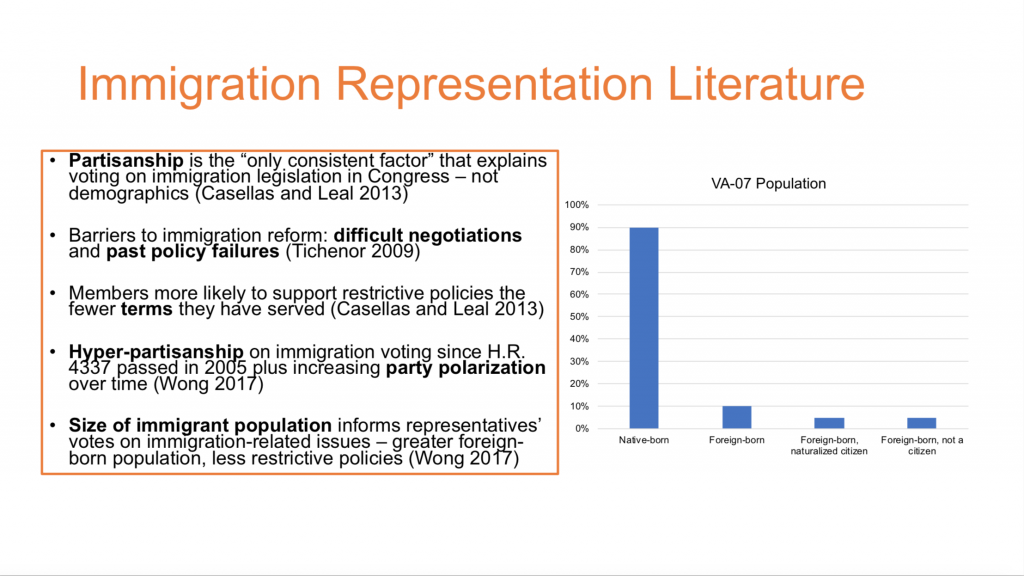 As existing literature has shown, partisanship is the greatest consistent predictor of how a representative in Congress will vote on immigration issues (Casellas and Leal 2013). However, there are other factors that can impact a member of Congress’ decision-making on the issue of immigration. One of which is the size of the immigrant population in the representative’s district as the larger the immigrant population is, the less likely the representative will be to support restrictive immigration policies (Wong 2017). Looking at the bar chart on the right of the slide, VA-07 is largely comprised of native-born citizens (90%). The remaining 10% of the population are immigrants, and of these immigrants, about half are naturalized citizens and the other half are not citizens. Despite the fact that immigrants are the minority in this district, its representative’s action on immigration-related policies is important to study. Immigration has been one of the toughest areas to create effective policy in given the past policy failures and difficult negotiations (Tichenor 2009). These are only two of the four challenges Tichenor lists in immigration policy with the other two being trouble defining the problem of immigration and inadequate policy alternatives, but past policy failures and difficult negotiations are the most relevant for the current study of VA-07 (Tichenor 2009). Given this and the hyper-partisan voting behavior on immigration issues since H.R. 4337 passed in 2005 and the increasingly entrenched party polarization, it is difficult for any policy to pass let alone an effective policy (Wong 2017). Another factor more specific to the representative is the number of terms that the representative has served in Congress. Members of the House of Representatives are more likely to support restrictive immigration policies the fewer terms they have served (Casellas and Leal 2013). These characteristics can then be used to predict how a legislator behaves in Congress. 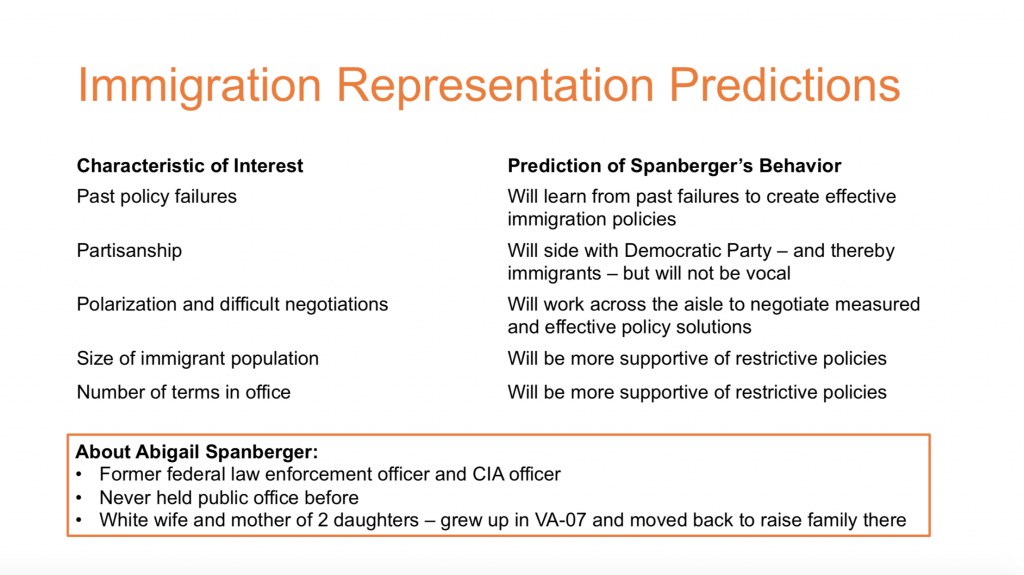 Taking into consideration the various characteristics included in scholarship and information about Abigail Spanberger herself, there are several predictions that can be made. Spanberger is a wife and mother of two daughters who has never held public office before. She worked as a law enforcement officer for the U.S. Postal Inspection service and as a CIA Operations officer. Spanberger grew up in VA-07, and she and her husband decided to move back there to raise their family. Relating these facts about Spanberger to the characteristics discussed in existing literature, it is likely Spanberger will use past policy failures to learn from past mistakes to create effective immigration policy with an emphasis on border security and national security. However, this is difficult given the extreme polarization in Congress. In this way, partisanship and party polarization are working against each other. Spanberger is a Democrat, which allows for the prediction that she will side with fellow Democrats on policy, which in turn means she would side with immigrants. However, her district is heavily Republican, so this in conjunction with the difficult negotiations surrounding immigration policy, Spanberger will likely try to work across the aisle to create measured and effective policy solutions. Although, with such a small immigrant population in her district and the fact that she is only in her first term, it is also likely that Spanberger will be more supportive of restrictive policies than her Democratic colleagues. Partisanship though remains the strongest indicator of representative behavior on immigration and will likely drive her decision-making on the issues, meaning she will be less vocal in her support for more liberal immigration policies since she may also support some restrictive policies as well and does not want to draw attention to herself for her liberal leanings with her conservative constituency. 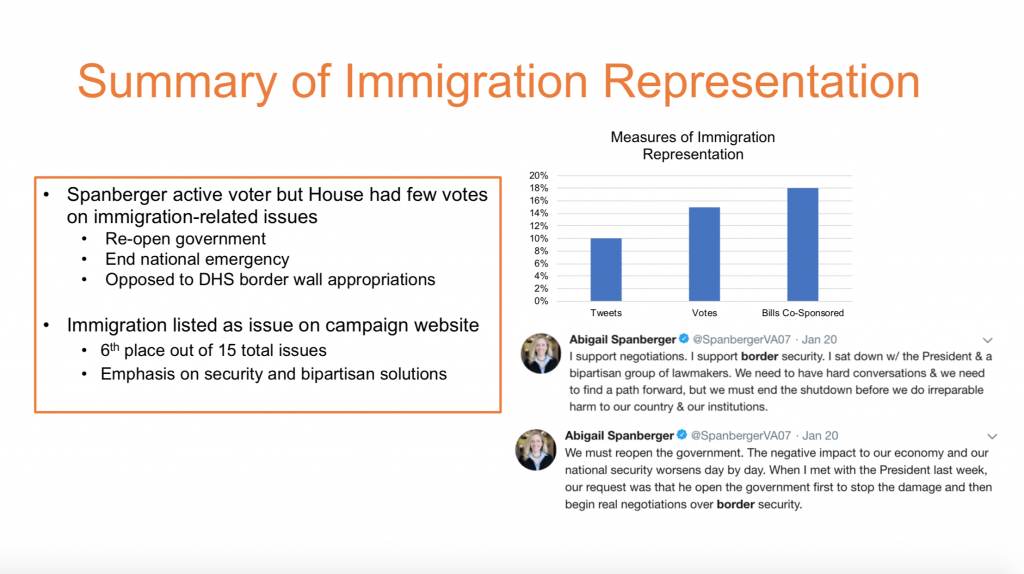 Despite the fact that immigration is an important issue to Spanberger, it is not an issue she is particularly active or vocal on. Immigration is listed sixth out of 15 total issues listed on her campaign website, which at first indicates that the issue is not of particular importance, yet it has one of the longest paragraphs — along with health care, jobs and the economy, gun violence prevention, and good governance —showing that it actually is one of the representative’s priorities. Consistent with her law enforcement background, the paragraph’s substance focuses on border security, and with the district’s heavy Republican lean, it also emphasizes the need for bipartisan solutions. She explicitly states that she opposes “safe havens” like sanctuary cities, which is a bit more restrictive than some of her Democratic colleagues. However, she has consistently voted in support of immigrants as she opposed funding for the Department of Homeland Security to build a border wall and most recently voted to end President Trump’s national emergency declaration. Spanberger’s Twitter account reveals she is quiet on issues of immigration but also that she is cautious about how she discusses immigration in her conservative and majority-native district. Only about 10% of the representative’s tweets focus on immigration-related issues, and in particular, these tweets focus on the government shutdown and the need to reopen the government with a bipartisan solution which prioritizes border security. This is consistent with her past law enforcement and CIA experience as well as her voting as she consistently voted to reopen the government during the shutdown. In terms of bill co-sponsorship, Spanberger has not been an active sponsor on immigration legislation. Only about 18% of her sponsored bills have related to the issue in some way, but since she is only in her third month in office, there is plenty of room for her to grow in this area. Taking all of this into consideration, Abigail Spanberger is a quiet supporter of immigrants, consistently voting with fellow Democrats to support immigrants while also being vocal about the need to come up with bipartisan solutions and framing the issue around border security to appease her conservative constituents.

This assignment represents my own work in accordance with University regulations.