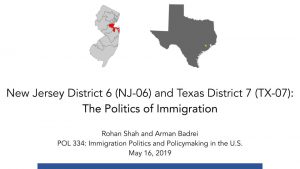 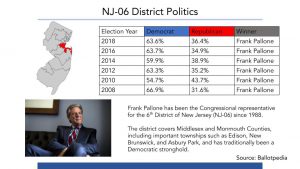 In the 6th congressional district of New Jersey (NJ-06), Congressman Frank Pallone has represented his constituents since 1988, winning his elections in the last decade by large margins. The district, which covers Middlesex County and Monmouth County, has been a Democratic stronghold. 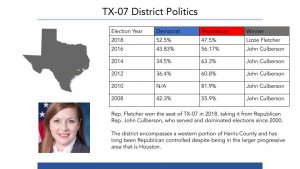 The 7th congressional district of Texas (TX-07) was represented by Representative John Culberson of the  Republican Party for more than a decade. In the 2018 midterm elections, Congresswoman Lizzie Fletcher turned TX-07 blue. 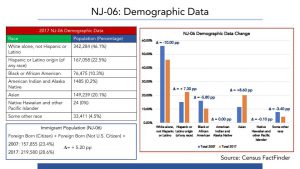 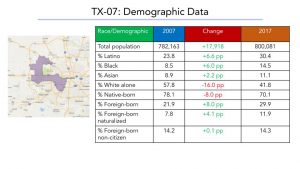 Both NJ-06 and TX-07 are majority-minority districts as of 2017. Over a ten-year period since 2007, the white population decreased, while Latino and Asian populations increased in both districts. The white population decline was greater in TX-07 but the growth of the Latino and Asian populations were slightly greater in NJ-06. The foreign-born, or immigrant, populations expanded in both districts, with a 5.2 percentage point increase in NJ-06 compared to an 8 percentage point increase in TX-07. 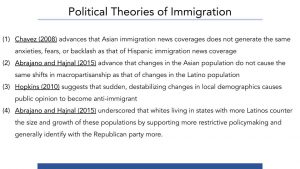 We both used certain scholarly work as a framework and motive for analyzing certain factors and larger themes. In the examination of NJ-06, Chavez (2008) and Abrajano and Hajnal (2015) predicted that changes to the Asian population demographic neither caused the same negative reactions nor shifts in macropartisanship as that of changes in the Latino population. TX-07 proved to also be especially interesting under the lens of existing research.  According to research by Hopkins (2015), public opinion in areas can change as a result of “sudden, destabilizing changes” in local demographics. On a related note, Abrajano and Hajnal (2015) assert that whites living in states with more Latinos will tend to counter that growth by supporting more restrictive policymaking and movement towards the Republican Party. 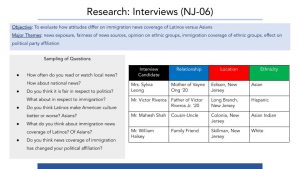 To determine the accuracy of overlaying such research on our districts, we both conducted qualitative interview studies. The research concerning NJ-06 focused on evaluating the differences in perception to immigration news coverages of Asians versus Latinos. In exploring that significant aim, the research examined exposure to local and national news, perceived fairness of such news in respect to immigration, opinions of ethnic groups, and the effects of immigration news media on political affiliation and views. Interviews were conducted with Asian, Hispanic, Asian-Indian, and Non-Hispanic white constituents in NJ-06. 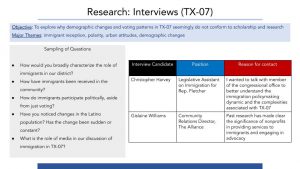 Although the research on TX-07 had a media-centric angle, the study focused far more on the perception and effects of the growth of ethnic populations. Interviews were conducted with Christopher Harvey, the Legislative Assistant on Immigration for Rep. Fletcher, and Gislaine Williams, the Community Relations Director at The Alliance, a nonprofit that works with primarily refugees but also immigrants. Main topics of the interviews were the reception of immigrants, the effects of demographic changes, urban attitudes on immigration, and the political situation and attitudes of the district in general. 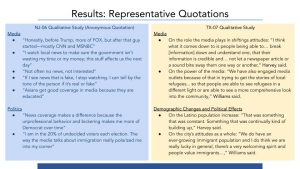 In comparing our results, we noted an intersection when evaluating the response to immigration politics in the media and demographic changes on the politics of each district. We included sample quotations that pertain to these categories. 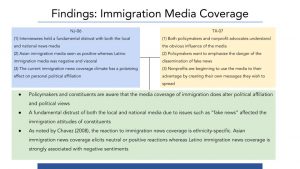 In terms of media coverage, in NJ-06, interviewees held a fundamental distrust of both the local and national news media. Furthermore, media coverage of Asian immigration was seen as positive and advantageous for the American economy whereas that of the Latino population was believed to be negative and visceral. Significantly, the current immigration news coverage climate was determined to have a polarizing effect on personal political affiliation. In TX-07, both policymakers and nonprofit advocates understand the obvious influence of the media. Additionally, policymakers want to emphasize the danger of the dissemination of fake news. Now, in addition to being service providers for immigrant communities and entities for advocacy, it seems nonprofits are turning towards functioning as an instrument or facilitator in the media world too: Williams at The Alliance talked about how they “have also engaged media outlets because of that in trying to get the stories of local refugees in newspapers, in local news, local TV news, so that people are able to see refugees in a different light or are able to see a more comprehensive look into the community” and have led media training for refugee leaders to teach them how to write opinion pieces and press releases. 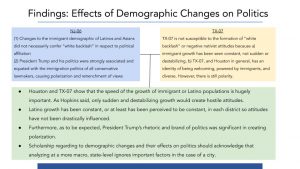 Both NJ-06 and TX-07 saw increases in the immigrant and Latino populations but our research indicates that this did not necessarily confer “white backlash” in respect to political affiliation. This is because the speed of such growth was rather constant, or perceived to be constant, and because President Trump’s politics played a more pivotal role than the issue of immigration which points to the rise in Democratic success since 2016. Polarization exists, but more so due to Trump rather than views on immigration specifically. 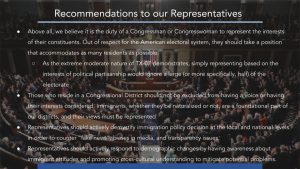 We recommend that our representatives, first and foremost, represent the views of all their constituents including citizens and non-citizens. However, we do understand the challenge in doing so. In TX-07, Harvey emphasized the difficulty in having polarity due to immigration and representing the views of a moderate district. Out of respect for the American electoral system, they should take a position that accommodates as many residents as possible. As the moderate nature of TX-07 demonstrates, simply representing based on the interests of political partisanship would ignore a large (or more specifically, half) of the electorate. Given the prevalence of immigration media coverage, representatives should actively demystify immigration policy decisions at the local and national levels to counter “fake news”, biases in the media, and transparency issues. As demonstrated with TX-07 and NJ-06, representatives should actively respond to demographic changes by having prescience about immigrant attitudes and promoting cross-cultural awareness to mitigate potential issues. 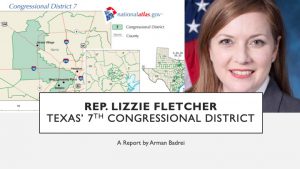 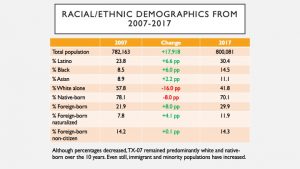 In terms of the racial and ethnic population makeup of Texas’ 7th district, the district has remained largely white and non-immigrant over the course of 10 years from 2007-2017, but there has been remarkable change in diversity. The Latino population has grown 6.6 percentage points and subsequently, the white alone and non-immigrant populations have decreased substantially. Furthermore, other minorities such as blacks and Asians have increased in size. In terms of the immigrant population, the foreign-born population has increased by 8 percentage points, with a higher increase in naturalized citizens over non-citizens. 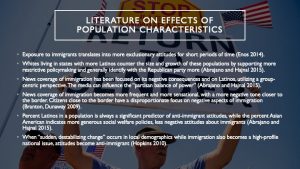 Existing research on how local population characteristics affect immigrant experiences, media coverage, and public opinions of immigration has been well-documented. In terms of immigrant experiences, Enos’ 2014 study shows that exposure to immigrants translates into more exclusionary attitudes for short periods of time (Enos 2014). These experiences also affect whites on the receiving end, as whites living in states with more Latinos are found to be more supportive of restrictive policymaking and generally identify with the Republican party (Abrajano and Hajnal 2015). News coverage of immigration has been found to push the immigrant threat narrative, cover immigration as a negative issue with pessimism, and focus on Latinos specifically (Abrajano and Hajnal 2015). Proximity to the border is an observed factor in determining the volume, sensationalism, and tone of immigration coverage, with more negative reception closer to the border (Branton, Dunaway 2009). Coverage often engages in agenda-setting, negative framing, and as a result, priming on the issue. In local public opinion, percent Latinos in a population is always a significant predictor of anti-immigrant attitudes, while the percent Asian American indicates more generous social welfare policies, less negative attitudes about immigrants (Abrajano and Hajnal 2015). When “sudden, destabilizing change” occurs in local demographics while immigration also becomes a high-profile national issue, attitudes become more anti-immigrant (Hopkins 2010). 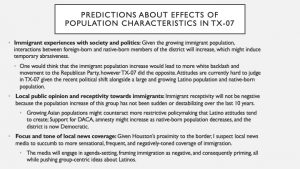 In the context of TX-07, immigrant experiences with society and politics is presumably at a negative-level, but with signs of optimism. Given the 30.4% Latinos, there are definitely interactions between immigrants and native-born residents, which might create some sense of white backlash, anti-immigrant views, and movement towards the Republican Party. However, the opposite took effect: TX-07 became Democratic in 2018, at the end of a 10 year increase in Latino population. I believe backlash to Trump overpowered attitudes on immigration here, which makes the conflict between the literature and the reality harder to identify. This is also why I want to explore this area in my research proposal. I don’t think immigrant receptivity will be negative because the population increase of this group has not been sudden or destabilizing, rather it’s been constant and consistent over the last 10 years. Furthermore, growing Asian populations might counteract more restrictive policymaking that Latino attitudes tend to create; support for DACA and amnesty might begin to increase as native-born population decrease. Given Houston’s proximity to the border, I suspect local news media to succumb to more sensational, frequent, and negatively-toned coverage of immigration. The media, regardless of their political leanings, will engage in agenda-setting, framing immigration as negative, and consequently priming, all while pushing group-centric ideas about Latinos. 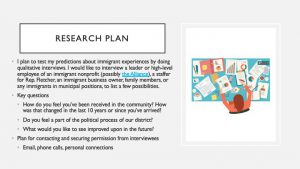 I plan to test my predictions about immigrant experiences by doing qualitative interviews. I would like to interview a leader or high-level employee of an immigrant nonprofit (possibly the Alliance), a staffer for Rep. Fletcher, an immigrant business owner, family members, or any immigrants in municipal positions, to list a few possibilities. I think it would be even more beneficial if people in these positions were also immigrants. I have worked with the non-profit the Alliance in the past and have suggested it due to my familiarity. Some key questions I would ask immigrants include: How do you feel you’ve been received in the community? How was that changed in the last 10 years or since you’ve arrived? Do you feel a part of the political process of our district? What would you like to see improved upon in the future? I plan on contacting and securing permission from interviewees through email, phone calls, and personal connections. 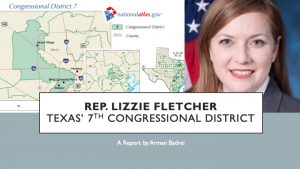 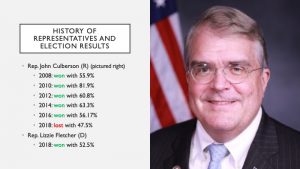 Republican Rep. John Culberson held the seat of TX-07 for 16 years, since 2000, winning by rather large margins up until 2016. In 2018, he lost his seat to the challenger from the Democratic Party, Lizzie Fletcher, by 5% or roughly 12,000 votes. Fletcher is currently serving her first-term in the 115th Congress. 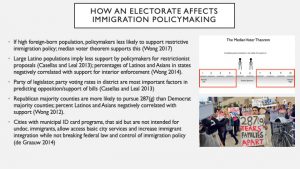 Wong (2017) argues that in constituencies with high foreign born populations, policymakers—both Republicans and Democrats—are less likely to support restrictive immigration policy. Casellas and Leal (2013) show that large Latino populations imply less support by policymakers for restrictive proposals, however partisanship is a more important factor in deciding whether a policymaker will vote for measures. Wong (2014) claims that as the percentage of Latinos and Asians in states increases, the probability of voting “yes” for interior enforcement decreases. 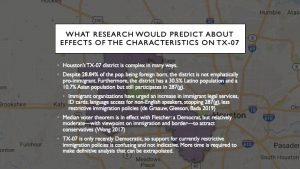 This research has some direct, visible effects on the TX-07 district, however recent changes in party control of the district make some findings difficult to interpret. 28.84% of the population is foreign born in the district, 30.5% is Latino, and 10.7% is Asian, however the district still has restrictive immigration policy. Immigrant organizations have urged an increase in immigrant legal services, the use of ID cards, language access for non-English speakers, stopping 287(g), and less restrictive immigration policies in general (de Graauw, Gleeson, Bada 2019). 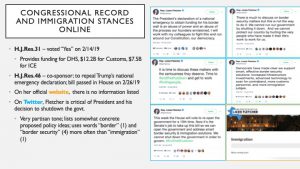 In terms of her congressional record, Rep. Fletcher’s voted “yea” on H.J. Res. 31 which provided funding for the Department of Homeland Security and included $12.2 billion for U.S. Customs and Border Protection and $7.5 billion for Immigrations and Customs Enforcement (ICE) on Feb. 14, 2019. She also cosponsored H. J. Res. 46 which repealed Trump’s emergency national declaration and passed on Feb. 26, 2019. She has cosponsored 3 bills and 1 (H.J. Res 46) was immigration-related; to say that 33% of bills she’s cosponsored have been immigration-related is a bit deceiving though, given the small sample size. Fletcher’s website is incredibly bare: under the category of “Other Issues” in which users would ideally be able to view her stances, for each of the nine issues, there is no information, only the message “More coming soon!” In 2019, on Twitter, Fletcher was vocal in January and February about the government shutdown and attacks with a standard, partisan tone from a Democrat. She tweeted 9 times about immigration (including one tweet of a picture of a border wall, one linking to a news article about wall funding, and one with the buzzword “borders“) out of 121 overall tweets within the January 1 to March 1 time period; 7.4% of Fletcher’s tweets were about immigration.