By Tori Gorton and Samantha Goerger

Despite the 1600 mile separation and drastically different state politics, two congressional districts from New York and Texas are surprisingly similar in regards to their action and inaction on the question of immigration. To explore the next steps in immigrant policymaking, we compared NY14 and TX18, situated in New York City and Houston, respectively. Both seats have been Democratic strongholds for at least the last 10 years. Demographically, NY14’s population is 47% foreign born and 76% non-white, while TX18’s population is 23% foreign born and 84% non-White.  According to extant research on demographics and immigrant representation, NY14 and TX18 should have permissive and comprehensive immigration reform policies.  While both Alexandria Ocasio-Cortez (NY14) and Shelia Jackson Lee (TX18) hold extremely liberal views on immigration, we find the articulation of said views to be lacking. We, therefore, propose that Alexandria Ocasio-Cortez and Sheila Jackson Lee better represent their local immigrant populations through increased vocalization of immigration-related issues, expanding the already extensive welfare programs to aid immigrant integration in NY14, and pushing for TX18 to become a sanctuary city.  Despite the aforementioned counter-arguments, we believe that our representatives could better represent on immigration by centering the needs of their immigrant communities. Expanding access to welfare, being more vocal about immigrant needs, and adopting sanctuary city policies would foster a safer, fairer, and more welcoming environment for their constituents.

Pushing for greater representation of immigrant interests in NY14 & TX18 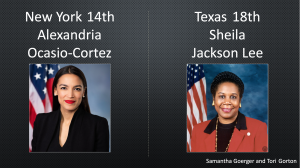 Despite the 1600 mile separation and drastically different state politics, two congressional districts from New York and Texas are surprisingly similar in regards to their action and inaction on the question of immigration. To explore the next steps in immigrant policymaking, we compared NY14 and TX18, situated in New York City and Houston, respectively. While the districts are very liberal, comprise a significant proportion of immigrants, and – according to existing research – should be pushing for permissive/comprehensive immigration reform, we find the articulation of local immigrant interests to be lacking in both places. We, therefore, propose that our members of Congress could better represent immigrants through increasing vocalization of immigration-related issues, expanding welfare to aid immigrant integration in NY14, and pushing for TX18 to become a sanctuary city. 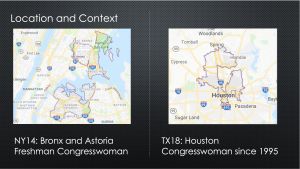 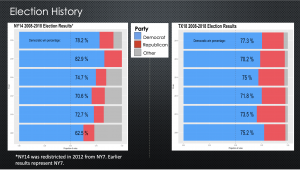 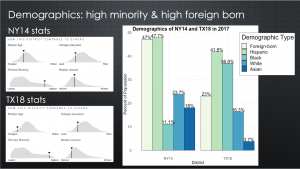 NY14 contains two NYC neighborhoods: Astoria and the Bronx. It is currently represented by Alexandria Ocasio-Cortez (AOC), a freshman Democrat in the House of Congress. TX18 contains much of inner city Houston as well as a significant portion of the greater metropolitan area. It is currently represented by Sheila Jackson Lee, a Democrat who has held the district’s congressional seat since 1995. Both seats have been Democratic strongholds for at least the last 10 years. Demographically, NY14’s population is 47% foreign born and 76% non-white, while TX18’s population is 23% foreign born and 84% non-White. Despite TX18 having a distinctly lower foreign born population than NY14, both are considered large in comparison to the national level of 13% foreign born. In addition, the population of TX18 is younger than that of NY14, similarly educated, and of slightly lower income. Aside from some small differences, the two districts are relatively comparable; however, they are disparate in their geographic context with TX18 being far more proximate to the southern border and in a Republican state, while NY14 is far removed from country borders and situated in a Democratic state. 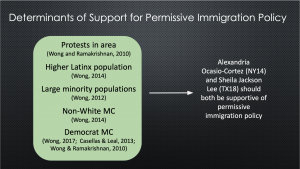 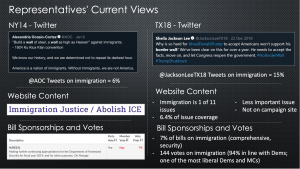 In spite of this, there is a clear gap between the supposed progressiveness of AOC’s and Lee’s and their public commitment to the issue. Despite purporting notions of “immigration justice” and the desire to “abolish ICE” on her website, AOC’s very active Twitter account only features immigration-related content 6% of the time in recent periods. Similarly, Lee’s website espouses that she is “one of the most outspoken proponents of comprehensive immigration reform in the Congress.” However, only 15% of recent content on Lee’s Twitter feed discusses immigration, 6.4% of issue discussion on her government website, and immigration is not even part of her campaign website’s listed issues. This disconnect betwixt the members’ action in Congress and their articulation of local immigrant interests is a concern that we address with three previously mentioned ideas. 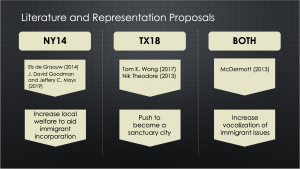 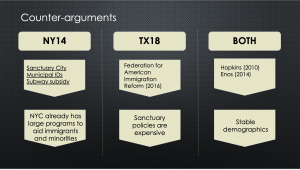 Consequently, we recommend that NY14 increase social welfare to aid immigrant incorporation in the district. This expansion in welfare could include expanding municipal ID cards by making it easier for immigrants to prove their identity, and include local voting benefits through the ID program such as exists in New Haven. Further, AOC should work to expand subway subsidy programs, because public transit is imperative for living, working, and going to school, especially in NYC. That said, it could be argued that NYC is already implementing extensive programs aimed to aid immigrants and minorities, so expansion may not be a top priority.

Our second recommendation is for Sheila Jackson Lee to push for Houston to become a sanctuary city. Research shows that economies are stronger and crime is significantly lower in sanctuary cities as compared to those in non-sanctuary cities. Another study of immigrant communities showed that increased involvement of police in immigration enforcement has significantly heightened the fears many Latinos have of the police, contributing to their social isolation and exacerbating their mistrust of law enforcement authorities. Thus, sanctuary city status for Houston would extend greater protections to its immigrant community – particularly the undocumented segment – and increase the overall safety of the community by allowing Latinos and immigrants to have a safer relationship with law enforcement. A counter-argument to making Houston a sanctuary city is that the policies required are expensive which presents a burden to legal taxpayers and local governments; it is estimated to have cost taxpayers around $113 billion to fund American sanctuary cities in 2013 (with the majority borne by those local to the respective locales).

Finally, we recommend for both Sheila Jackson Lee and AOC to increase their vocalization on immigrant issues – particularly in the local context in hopes to increase the saliency of local immigrant interests, incite change, and aid immigrant integration. A counter-argument to this proposition is that the demographics of both districts have been very stable over the last 10 years, which suggests a stable public opinion on immigration, thereby, not warranting either of the Congresswomen to devote more resources to the issue.

Despite the aforementioned counter-arguments, we believe that our representatives could better represent on immigration by centering the needs of their immigrant communities. Expanding access to welfare, being more vocal about immigrant needs, and adopting sanctuary city policies would foster a safer, fairer, and more welcoming environment for their constituents.

Slide 1: Since Sheila Jackson Lee’s election to office in 1994, she has won every election for TX-18’s representative seat. In the most recent elections (2008-present), Lee has won with a significant margin (between 42.9 and 57.0 points) over the Republican candidate. This suggests that TX-18 is a consistent Democratic and – coupling this with its high minority and immigrant population as well as its urban focus of Houston – progressive district.

Slide 3: Looking at the characteristics of TX-18 in relation to the determinants discussed in the previous slide, we can see that it is likely that Sheila Jackson Lee will be a supporter of permissive policy and an opponent of restrictive policy. Despite Houston being in a Southern state with no agriculture industry and relatively high unemployment, the determining factors on the other side of the story more strongly indicate the likely support of Lee for pro-immigrant policy. Firstly, as a liberal Democrat, she is of an ideology that is more welcoming of immigrants and, as a non-White representative she is more likely to push back against the ‘White America’ rationale that often pervades restrictionist thought. Secondly, the political protests that took place in Houston last year and in 2006 (as part of a national movement in response to HR 4437), along with the recency of a lot of the immigration into the district, is indicative of the constituent population’s needs and wishes that would drive Lee’s permissive policy support. The weighing up of both sides leads me to believe that Lee is more likely to support permissive policy than restrictive.

Slide 4: On Sheila Jackson Lee’s website, she dedicates one page to the issue of immigration. On this page, which represents 1 of 11 pages for miscellaneous issues and 6.4% of their overall substantive content, Lee describes her stance and actions concerned with immigration; namely, how she desires to protect Dreamers, find a path to naturalization for the existing undocumented immigrants in the county, protect families at the border, diversify the incoming immigrants, and prevent terrorists from entering the country. Regarding her actions on the matter, her press releases shed light on her work against the family separation occurring at the Southern border, her condemnation of Trump’s tweets and the GOP’s xenophobic remarks, her work towards comprehensive reform, and her efforts to secure temporary protected status for international victims of civil war and natural disasters. Despite this platform, her website contains no resources for immigrants and her campaign website contains no mention of immigration whatsoever. On Lee’s Twitter she is a frequent poster of pro-immigrant content and often posts anti-Trump messages which opposes his actions on immigration policy; beyond her own tweets, she retweets other representatives and pages that share messages of a similar nature. Lee’s bill-sponsorship record is indicative of her website and Twitter: they reflect efforts of comprehensive reform, anti-border wall, and national security. This is all demonstrative of the research findings from earlier slides.