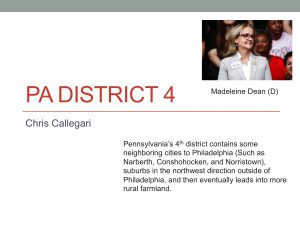 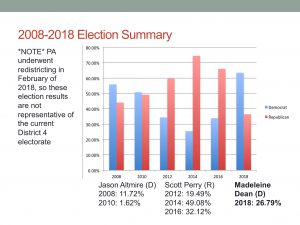 Because of the redistricting for all of the congressional districts in Pennsylvania in February of 2018, the first five election results are not particularly representative of district 4’s populace. Previously, district 4 was located in central/western Pennsylvania which is a very different environment than the Philadelphia suburbs. Although in the far northwest sections of the new PA 4 there is rural farmland, prior to 2018 rural land was the majority. This explains why after the switch, a Democrat with a 26.79% margin replaced a Republican who previously won by margins of 49.08% and 32.14%. The new PA 4 is entirely different geographically than the pre-2018 district. 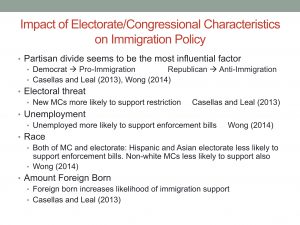 The two papers which focused most on the impact of both electorate and congressional characteristics were Casellas and Leal (2013) and Wong (2014). The most prominent finding from both papers seemed to be that partisan divide is the biggest predictor for determining a stance on immigration. When either an MC is Republican, or an area is predominately Republican, it is more likely to hold a restrictive stance on immigration. If the area is mostly Democratic or if the MC is a Democrat, then the reverse would likely be true (Casellas and Leal 2013) (Wong 2014). In addition, MCs who are new to office are more prone to support restriction (Casellas and Leal 2013). This could potentially be caused by a reluctance to make a big change or take a strong stance in order to not alienate a sector of the MC’s electorate. Wong (2014) also found unemployment to be associated with support of enforcement bills. One potential causal reason for this is because of a fear that immigrants will choose to work for lower wages and increase labor competition in the region. The ethnicity of the MC and his or her electorate is also an important factor—Hispanic and Asian voters are less likely to support restrictive immigration bills (Wong 2014). In addition, non-white MC’s as a whole are more prone to loosening immigration laws.  The amount of foreign-born individuals also makes it more likely for a region to be in support of immigration (Casellas and Leal 2013). 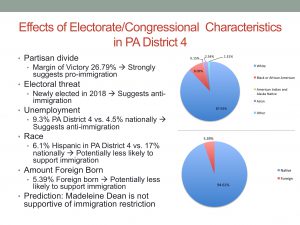 Following on the predictions presented in slide 2, I compare how PA 4 appears based on the national findings in Casellas and Leal (2013) and Wong (2014). Since Madeleine Dean won by such a large margin, I argue that PA 4 is predominately Democratic. If the district is in fact very partisan, even if some other factors suggest a lean towards anti-immigration, partisanship is still the most important indicator as shown by Casellas and Leal (2013) and Wong (2014). Based on this evidence alone, PA 4 would strongly support loosening of immigration laws. The findings for electoral threat, unemployment, race, and amount foreign-born suggest otherwise, however. Madeleine Dean is newly elected in 2018, so she may be more prone to favor restrictive bills. She does not want to upset the people who elected her with a polarizing stance on an important issue. In addition, having over double the national unemployment rate suggests a conclusion that the district would not support immigration. The racial makeup is also much less diverse than the US, and mostly comprised of Caucasians—suggesting again that there may be an anti-immigration lean. The amount of foreign-born citizens as shown by the pie chart is quite small, which may make the topic of immigration less of a priority than other more personalized issues for this electorate. Although everything besides partisan divide suggests that PA 4 may not be in favor of increased immigration, I believe that because of such a large partisan divide, Madeline Dean will support loosening of immigration laws. 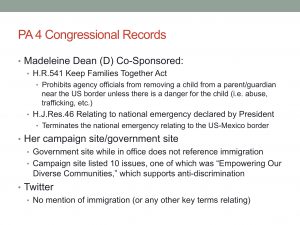 Because of the redistricting and the fact that Madeleine Dean was elected so recently, it was challenging to find comprehensive congressional records for the region. Madeleine Dean is co sponsoring two bills which relate to immigration: H.R.541 and H.J.Res.46. H.R.541 stops agents at the border up to 100 miles inland from separating a child from a parent or guardian even if they entered the country illegally. The bill specifies specific cases where the child may be separated such as abuse or suspected future harm, but the purpose is to give immigrant families more rights. Without this, a small child may be taken from his or her parents simply because they were trying to enter without proper authorization. In addition, H.J.Res.46 would end President Trump’s national emergency relating to immigration over the US/Mexico border. Both of these bills suggest Madeleine Dean is at least partially supportive of immigration. Outside of these two bills, there was little information to glean from her public accounts and websites. The only other vaguely related reference I found was that she wanted to “[Empower] Our Diverse Communities.” Although that is nowhere near an explicit statement of support for immigration, by strengthening minority communities, she would also be strengthening immigrant communities (since they are often found to be the minority). One reason this may be a difficult topic to find information on is because immigration may not be a prominent issue for PA 4 specifically. With a small amount of foreign born individuals, it appears that there are not many people moving to the area from abroad, so the populace may prioritize issues that pertain directly to them.