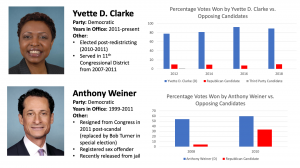 Slide 1: New York’s 9th Congressional District has historically been dominated by Democrats. In the past 10 years, two Democratic Representatives and an interim Republican Representative have held office in New York’s 9th Congressional District. From 1999-2011, Anthony Weiner held office. In 2010-2011, New York City was redistricted according to data from the 2010 census. In 2011, Anthony Weiner was forced to resign from Congress after a sexting scandal and was replaced by Robert Turner (a Republican candidate). Since 2011, Yvette D. Clarke has held office, winning by a margin of more than 60% in every election (according to the graphs on the slide). In the most recent 2018 election, Clarke received 89.3% of the vote, while her opponent (a Republican named Lutchi Gayot) received only 10.3% of the vote. 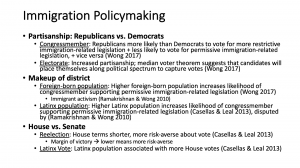 Slide 2: There are three overarching hypotheses of influences to immigration policymaking that I extracted from the literature that we have been reading: first, partisanship; second, district demographics; and third, the effects of the House and the Senate. The most important factor influencing immigration policy is partisanship. Republican congressmembers tend to support more restrictive policies, whereas Democrats tend to support more permissive policies. Congressmembers are also influenced by their voters: according to the median voter theorem, candidates will place themselves along a political spectrum to capture the most votes possible. As the electorate in recent years has also become more partisan, it can be extrapolated that congressmembers will be affected by the new, more polarized median voter. The idea of the median voter also feeds into the second overarching set of hypotheses: that the demographics of the district affect voting for immigration policies. A higher foreign-born population decreases the likelihood that legislators will vote for restrictive immigration-related legislation (Wong). While in general, naturalized citizens have more influence than undocumented immigrants (due to their electoral power), undocumented immigrants still have ways to exert political power, primarily through immigrant activism: for example, according to Ramakrishnan & Wong, after the 2006 Immigration Protests, cities in which the protests were strongest were correlated with representatives that voted for more permissive immigration policies. The effect of the Latinx population had mixed results through different studies: while Casellas & Leal find that a higher Latinx population increased the likelihood of a congressmember supporting more permissive immigration-related legislation, Ramakrishnan & Wong find that it did not make a huge difference. The final overarching influence has to do with whether a congressmember is in the House or the Senate; because the terms for the House are much shorter, members of the House tend to be much more worried about reelection, especially if the margin of victory is lower. Due to reelection concerns, House members tend to be more risk-averse about their vote, whereas senators (who have six-year terms), tend to be less worried about reelection and therefore are more willing to vote outside the desires of their constituency (Casellas & Leal). In addition, possibly due to reelection concerns, the Latinx population has a larger effect on House votes than Senate votes (Casellas & Leal). 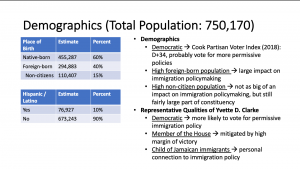 Slide 3: Both the demographics of New York’s 9th Congressional District as well as the personal biases of Clarke probably had a significant effect on more permissive policymaking for immigration. As aforementioned, the district is largely Democratic. In fact, according to the Cook Partisan Voter Index (which measures partisanship of a district according to how it voted in the last presidential election compared to national result), the Democratic leaning is measured at D+34, making it about the 13th most Democratically skewed district in the United States. As a result, Clarke, being a representative of this district, would probably vote for more permissive immigration policies. In addition, the district comprises of 40% foreign-born residents, so Clarke probably has more of an incentive to focus on immigration concerns and to vote on immigration bills in general (esp. in comparison to other areas of concerns). Considering that a higher foreign-born population has a significant impact on more permissive immigration policymaking, it can be expected that Clarke was probably influenced by this section of her constituency to vote more permissively. In addition, the fact that approximately 15% of the population are non-citizens probably has a significant impact on Clarke voting. As a side note, some of the 2006 Immigration Protests were held in Brooklyn, suggesting the activism of the immigrant / undocumented population there. Finally, the district is also 10% Latinx, a relatively large number but less than the percentage of Latinx people in the nation (about 18.1%), so I’m not sure the extent to which this part of the population would affect Clarke’s vote. I assume that it would have somewhat of an impact on Clarke’s immigration policies. Meanwhile, Clarke herself is also Democratic, and thus probably more likely to vote for permissive immigration policy. In addition, while Clarke is a member of the House, this issue is probably mitigated by the high margin of victory she has achieved in past elections (in 2018, winning about 89.3% of the votes), as well as the fact that she has been in office for an extended period of time. Finally, Clarke’s personal connection to immigration, being a child of Jamaican immigrants, probably provides a certain bias towards the topic. 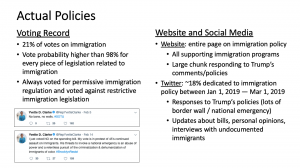 Slide 4: As expected, Clarke has spent much time voting on and advocating for immigrant rights. Approximately 21% of her votes have been dedicated to immigration (making it the second-most important issue for her). Her vote probability for immigration bills have been higher than 98% for every piece of legislation related to immigration, indicating her consistency: she always votes for permissive immigration regulation and votes against restrictive immigration legislation. Clarke’s interest in immigration is also reflected through her website and social media. Her website features a subpage on immigration policy (which is currently 28 pages), and all of the posts are pro-immigration. As of recently, a majority of these posts have been dedicated to responding to Trump’s comments or policies. Clarke’s twitter also features a large number of immigration policy tweets. Approximately 18% of her tweets from January 1, 2019 to March 1, 2019 were related to immigration policy, mostly to do with responses to Trump’s policies (especially about the border wall and the national emergency), but also some updates about bills, personal opinions, and interviews with undocumented immigrants. The slide also features two tweets that reflect the tone / content of many of her immigration tweets: they are largely reactionary towards President Trump’s policies about the Mexican border. As a side note, Clarke also tweeted extensively about the national emergency in general, but I did not include that in the 18% of tweets as I thought that it was mostly about executive power rather than immigration.