Here is a link to my full presentation: https://docs.google.com/presentation/d/1pNI-cZc1k_FTp0H0fMUvWCtKKPq3Gq3BeM6dhi-ijOk/edit?usp=sharing 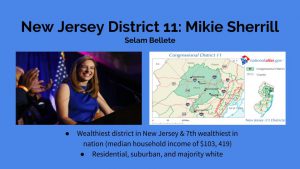 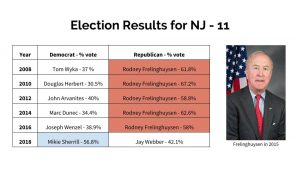 From 1995 to 2018, New Jersey’s 11th Congressional district was represented by Rodney Frelinghuysen, a moderate Republican who also served as chairman of the House Appropriations committee before retiring in 2018. Interestingly, two of his lowest vote totals and margins of victory over the last ten years occurred in the same years as the 2008 and 2012 presidential elections, which Democratic candidates won. In 2008 Frelinghuysen won with a 24.8% margin, and in 2012 he garnered an 18.8% margin. In the 2018 elections, Mikie Sherrill won with a 14.7% margin of victory over her opponent Jay Webber. Taxes, healthcare, and gun control reform were major issues for her during the campaign. Sherrill also had strong showings leading up to the election and at the county level. She won the Democratic primaries for NJ – 11 with 77.5% of the vote and won the majority of the votes in 3 of 4 counties falling within the district’s borders (Morris, Essex, and Passaic). 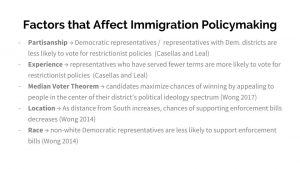 Partisanship, personal background, and a district’s political climate impact the types of policies representatives are willing to support. In their paper, Casellas and Leal argue that polarization caused partisanship is a strong predictor of votes: the Democratic Party became more liberal and the Republican party became more conservative during the last two decades. They also argue that foreign-born populations are related to support for permissive policies. Wong finds a racial rift within the Democratic party, as white Democrats were more likely to vote against such policies than minority Democrats. He also finds that the distance of a state relative to the South is inversely related to the chances of the representative supporting restrictionist policies. This may happen because any negative effects of illegal immigration would be felt more strongly in these states, which are closer to the border. Casellas and Leal also found that newly elected representatives were more likely to vote “yes” on enforcement bills regardless of party affiliation, since voting “no” could be used against them by their conservative constituents. Lastly, Wong’s median voter theorem predicts that candidates in districts that are evenly split across party lines will be most successful by campaigning for centrist or moderate immigration policies. 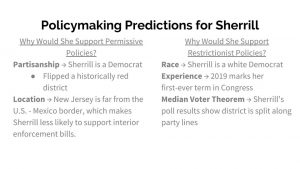 I predict that Mikie Sherrill will take a moderate stance on immigration policies by supporting a mix of permissive and restrictionist policies. She is a Democrat, and Casella and Leal’s analysis found partisanship to be significant across all four of their models. Her supporters expressed disillusionment with Frelinghuysen, which suggests that mirroring his views on immigration – which reflected Trump’s views on the subject – would alienate her from NJ -11’s Democratic voters. Her district is located in a state relatively far north, meaning that immigration is not as polarizing of an issue as it is for border states. When Sherrill supports permissive policies, she may not upset as many of her Republican constituents. However, the median voter theorem suggests Sherrill’s election results will cause her to support some restrictionist policies as well in order to balance the interests of and remain favorable among her supporters and the sizable Republican voter base in NJ – 11. Her opponent Jay Webber had secured 42.1% of the votes, meaning a little less than half of the population voted Republican and most likely has conservative views on immigration. 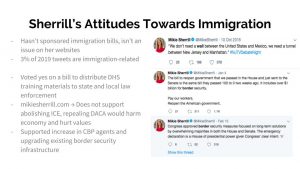 Mikie Sherrill’s online and political presence indicate mixed attitudes on immigration. Her website lists issues such as the economy, veterans, and healthcare, but is mainly devoid of immigration-related content. In two tweets from 2019 (out of 60 total) she expresses her frustrations over the government shutdown’s negative effects on efficient policymaking and people’s economic conditions. In the single immigration-related tweet of her campaign, Sherrill uses the impracticality of a border wall as a lead-in to make a point about the Gateway Tunnel. This is important to NJ -11 because the Trump administration had refused to provide federal funding for its estimated $11-billion budget. The tunnel would expand the currently overcrowded and old tunnel system that links Newark to Manhattan, which many NJ-11 residents rely on for their daily train commutes to work. In support of partisanship being a strong predictor of viewpoints on immigration, she stated abolishing DACA was wrong because it tore children from their families and created a loss of job growth in New Jersey. However, Mikie Sherrill’s support of ICE, expanding CBP, and upgrading the current border wall demonstrate her support for restrictionist policies. Despite her low activity on immigration policymaking, Sherrill believes in the importance of immigration reform for her constituents regardless of their citizenship.